Leeks add sweet, oniony flavor to soups, stews, pastas, and more! Read on to learn how to cut and cook them, and find some of my favorite leek recipes. 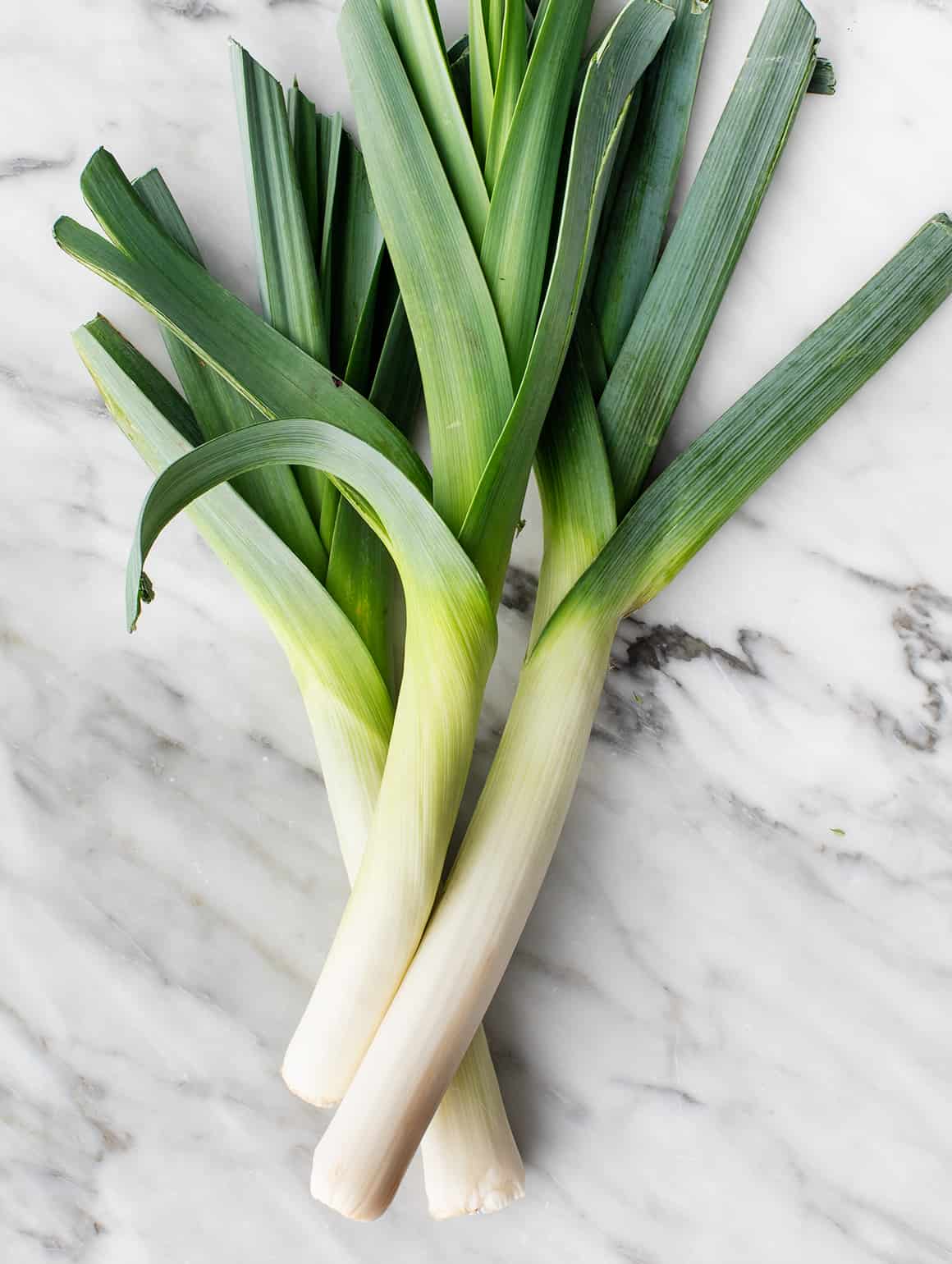 Ever heard of potato leek soup? I thought so! But how often do you cook leeks in other recipes? Have you tried them in pasta, stuffing, or risotto? Have you eaten them on their own? If I had my way, we’d all be eating leeks way more often. They’re incredibly versatile, adding unique, sweet, and mild onion flavor to a huge range of dishes.

To spread the leek love, I’m sharing my go-to methods for how to cut, clean, and cook leeks below, as well as my favorite leek recipes. If you have a leek in your fridge right now, I hope you’re excited. This veggie seems humble, but there’s so much that it can do!

Leeks are alliums, so they’re related to garlic, chives, shallots, and onions. Tasting them, you can tell. They have a sweet, oniony flavor that adds depth to soups, stews, pastas, and more! I’ll share more of my favorite leek recipes in the post below, but generally, I use them as I do onions and shallots, to build flavor at the start of a recipe. However, because they’re milder than most other alliums, I also like to enjoy them on their own. Grilled or roasted, they make a surprising, delicious side dish. Heads up – if you choose to serve them this way, look for really fresh, peak-season leeks. They’re at their best in the fall and spring. 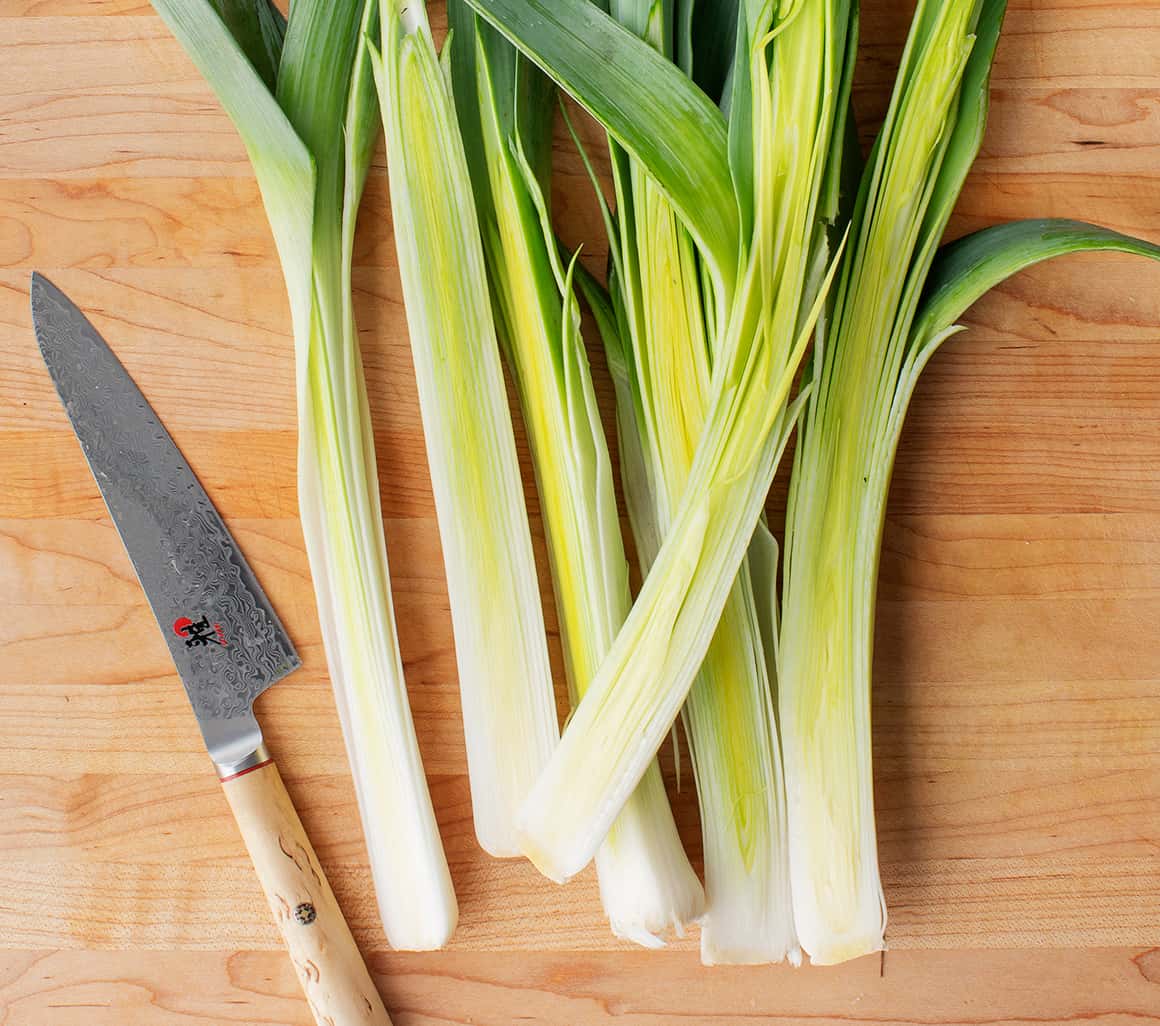 How to Cut Leeks

How you cut leeks will vary based on how you cook them. This method for how to cut leeks is the one I use most often. It works perfectly anytime you sauté leeks, as you would for a soup, pasta, or risotto. Here’s how it goes:

First, slice the leeks in half lengthwise. 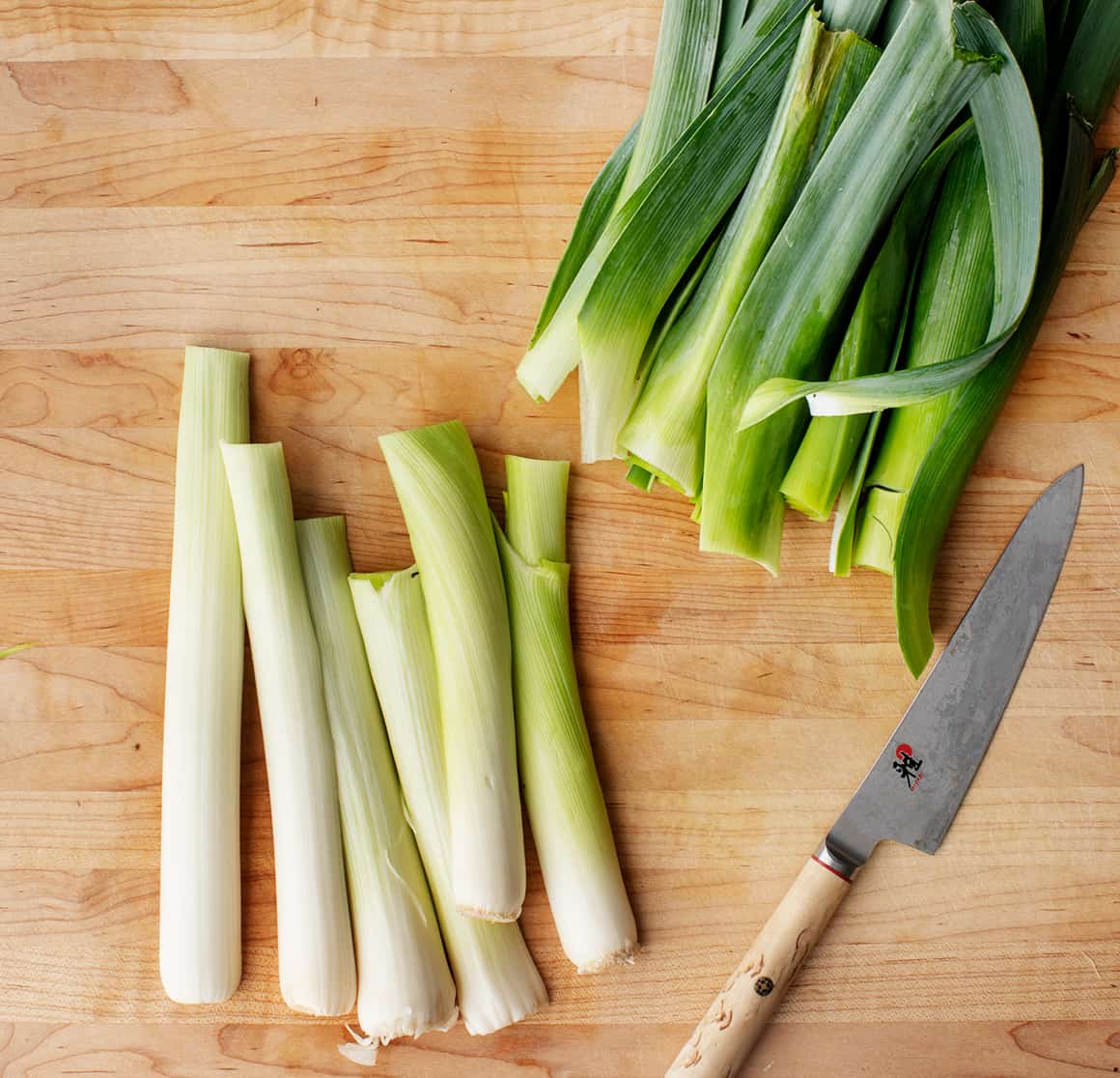 Then, chop off the stringy roots and dark green leaves. You won’t use the tough tops in most leek recipes, but still, don’t toss them! They add delicious oniony flavor to homemade stock. Store them in an airtight bag in the freezer until you’re ready to make some. 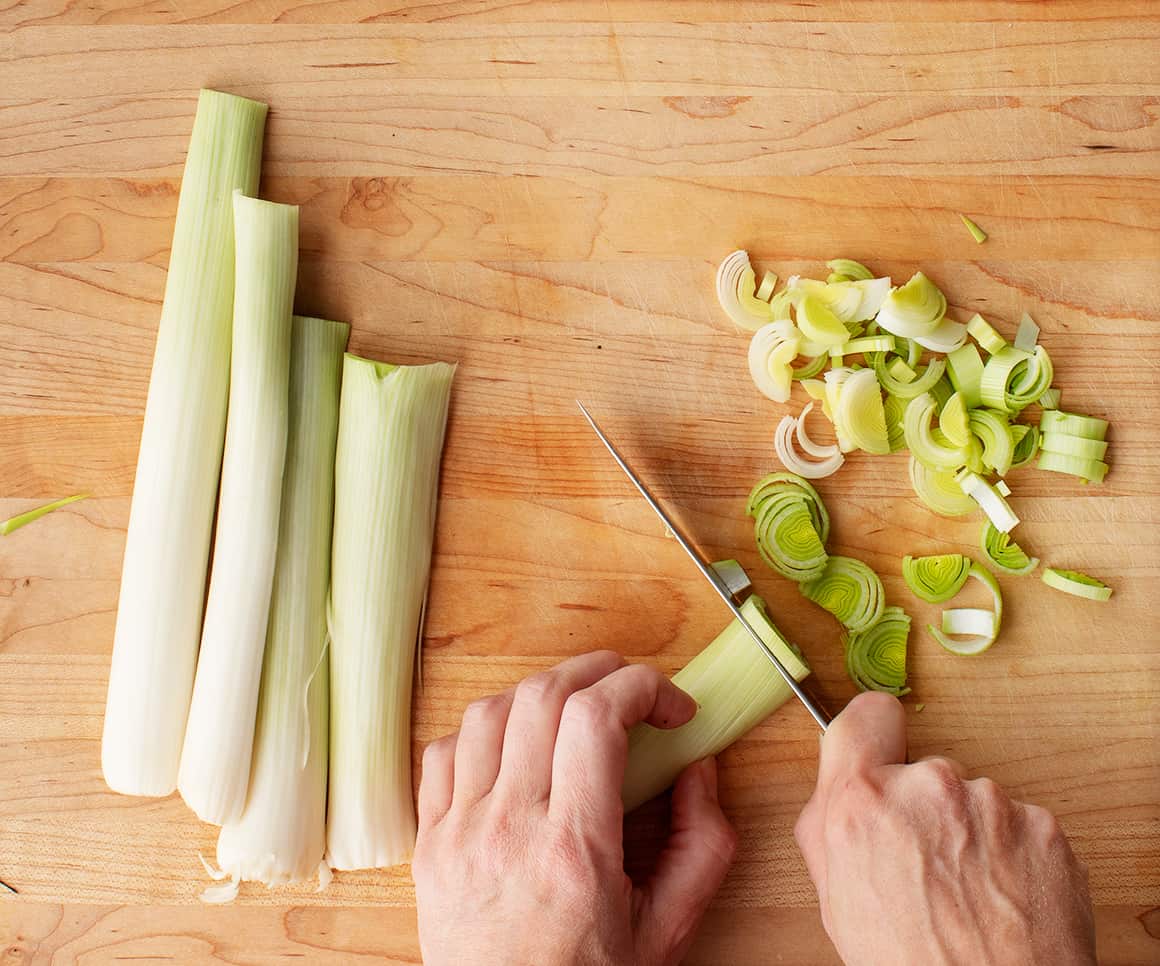 Next, continue chopping the white and light green parts. Lay them cut-side-down on your cutting board, and cut them into thin half-moons. 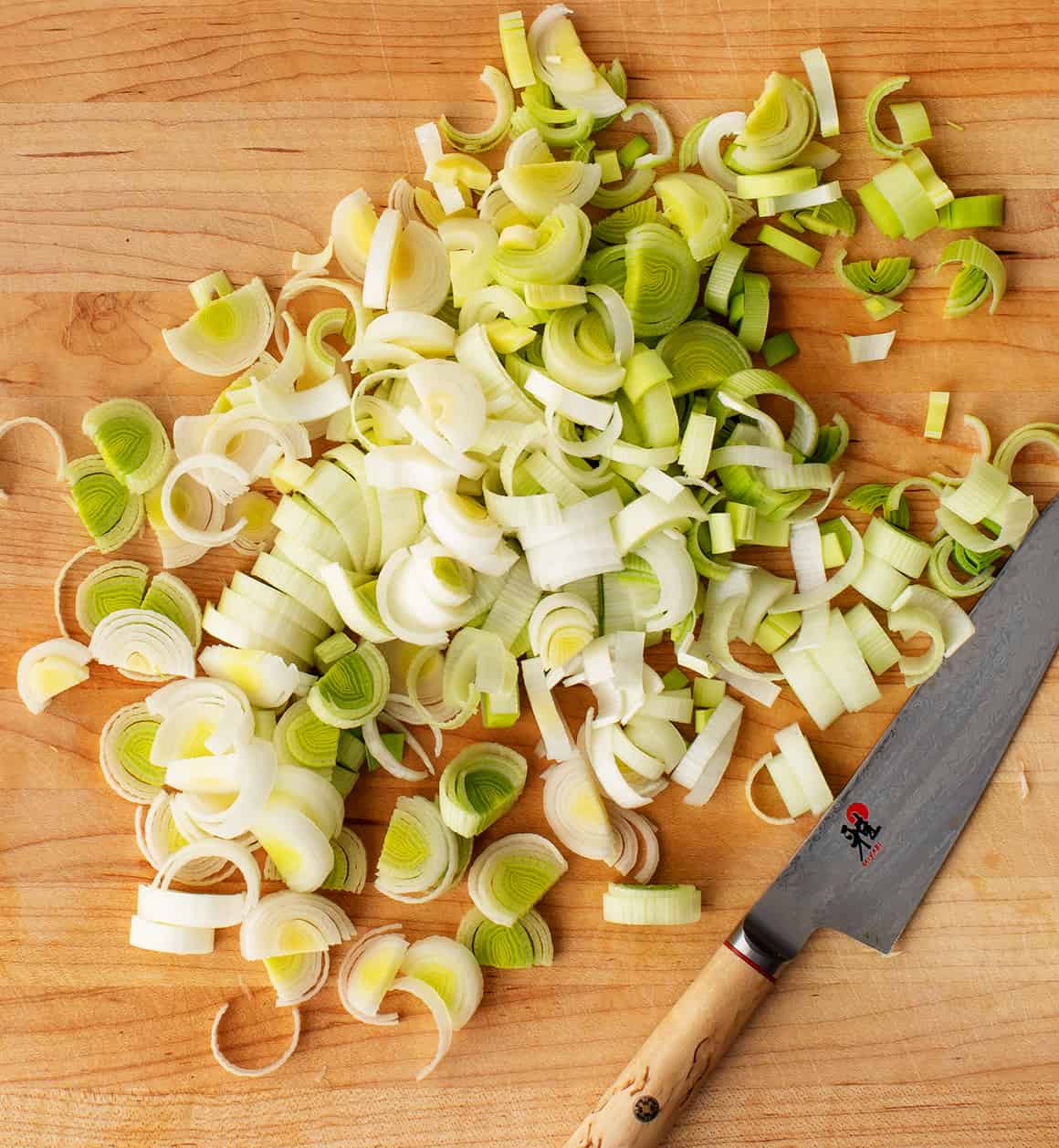 Now, you might find that your leeks are pretty dirty inside. That’s totally normal! Leeks are often filled with dirt and sand, so cleaning them is an important part of the cutting process.

Once you’ve cut all the leeks into thin slices, add them to a colander. Rinse them under cool running water, tossing them to remove any dirt or debris. When the chopped leeks are clean, use a paper towel or kitchen towel to blot them dry before you start to cook. 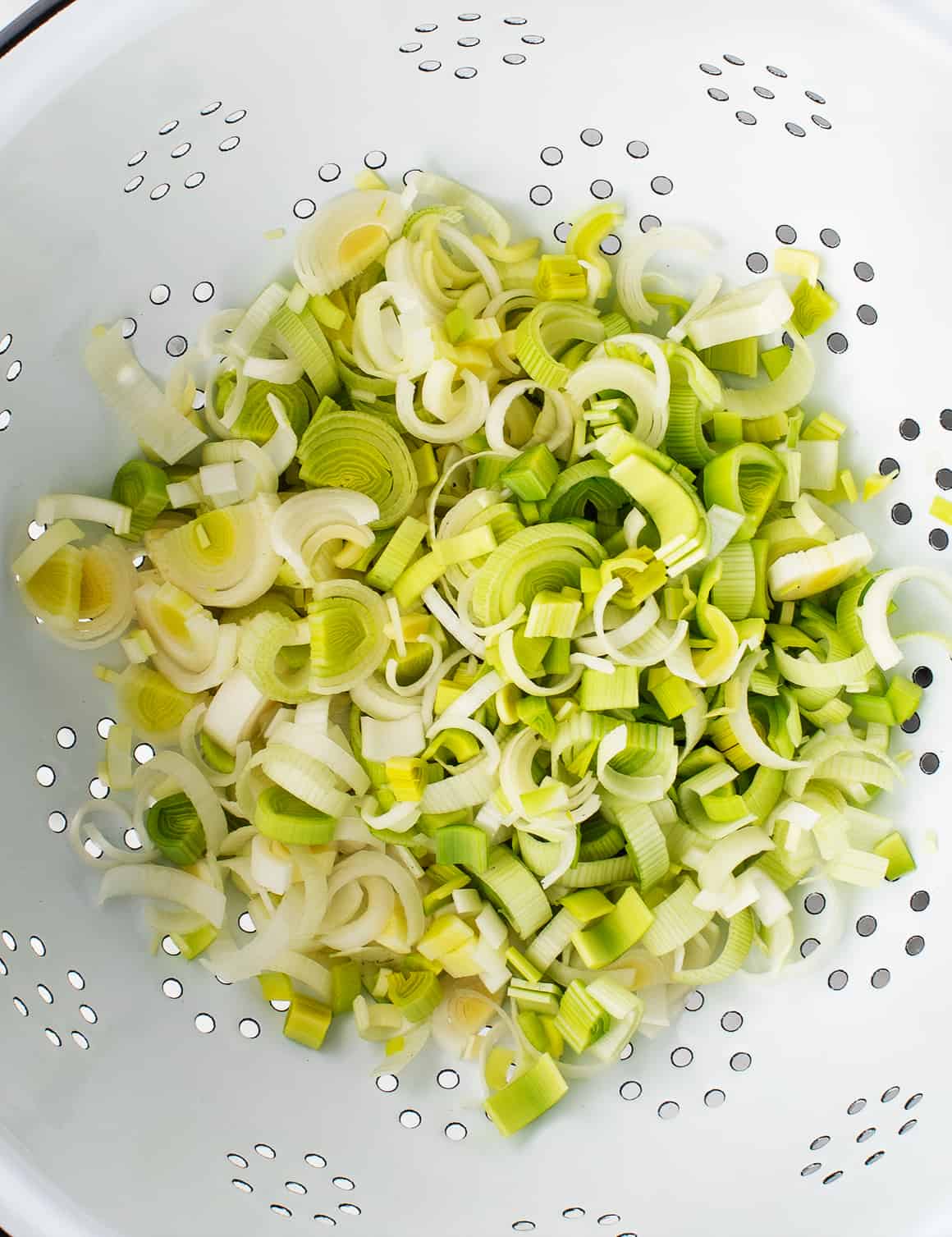 How to Cook Leeks

Now you know how to cut leeks, but what about how to cook them? My favorite methods for how to cook leeks are roasting, grilling, and sautéing. As I mentioned above, you’ll cut them a little differently for each cooking method:

In each of these methods, you’ll only use the white and light green parts of the leeks, not the dark leaves. Still, don’t toss those tops! They add delectable flavor to homemade vegetable stock. Find my recipe on page 106 of Love & Lemons Every Day.

With these basic cooking methods in your back pocket, you’ll be able to enjoy leeks as a side dish or add them to any leek recipes you like! Need some ideas? Here are a few of my favorite ways to use them:

What are your favorite leek recipes? Let me know in the comments!

If you loved learning how to cook leeks, check out one of these vegetable guides next:

How to Cut and Cook Leeks

rate this recipe:
5 from 26 votes
Prep Time: 5 mins
Cook Time: 20 mins
Serves 4
Pin Recipe Print Recipe
Leeks add sweet, mild onion flavor to soups, stews, and more. These are my methods for cutting and cooking them. See the blog post above for some of my favorite leek recipes.

How to Cut Leeks

How to Cook Leeks