This vegan stuffing recipe is my favorite Thanksgiving side dish! Onions, celery, and sautéed mushrooms fill it with delicious savory flavor. 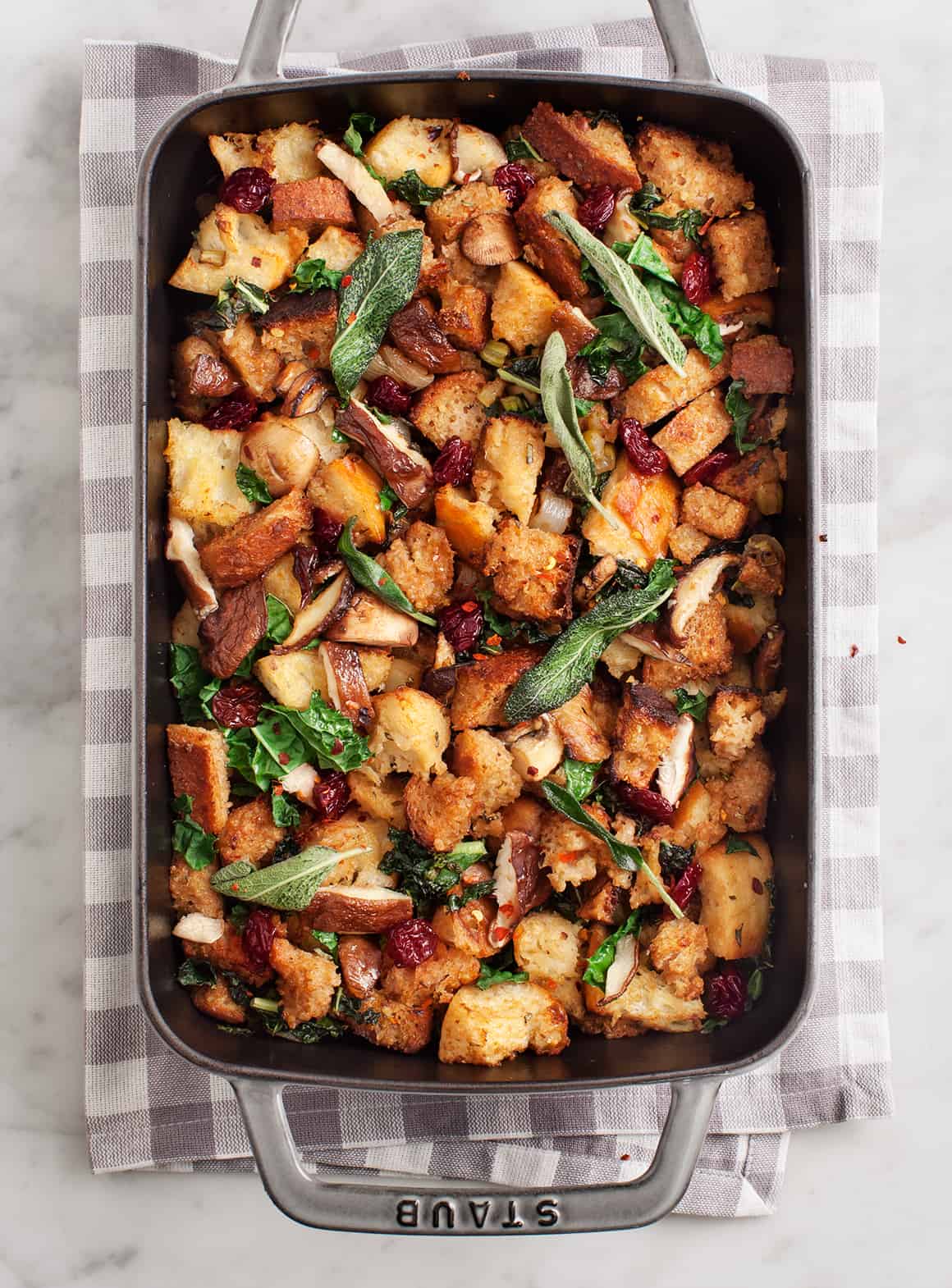 This vegan stuffing recipe is a plant-based version of my mom’s classic stuffing recipe. Her stuffing has been my favorite part of Thanksgiving ever since I was a kid. She never makes it from a box, but uses fresh bread, lots of butter, onions, and celery instead. It’s richly flavorful, soft in the middle, and crisp on top, and it’s always the first dish I reach for at Thanksgiving dinner.

In this vegan stuffing recipe, I keep the celery, onions, and crusty bread, but I use a generous amount of olive oil instead of butter, which adds robust flavor. Then, I increase the veggies. Along with the onion and celery, I add a hefty amount of shiitake mushrooms, kale, and tons of fresh herbs. Sautéed with a splash of balsamic vinegar, the mushrooms give this stuffing a delicious savory flavor – it took everything I had to resist devouring it straight out of the pan!

Traditional stuffing is typically considered a Thanksgiving side dish, but with all these hearty veggies, this vegan stuffing recipe could easily pass as a meatless main course. It’ll definitely be at the center of my plate at Thanksgiving this year! 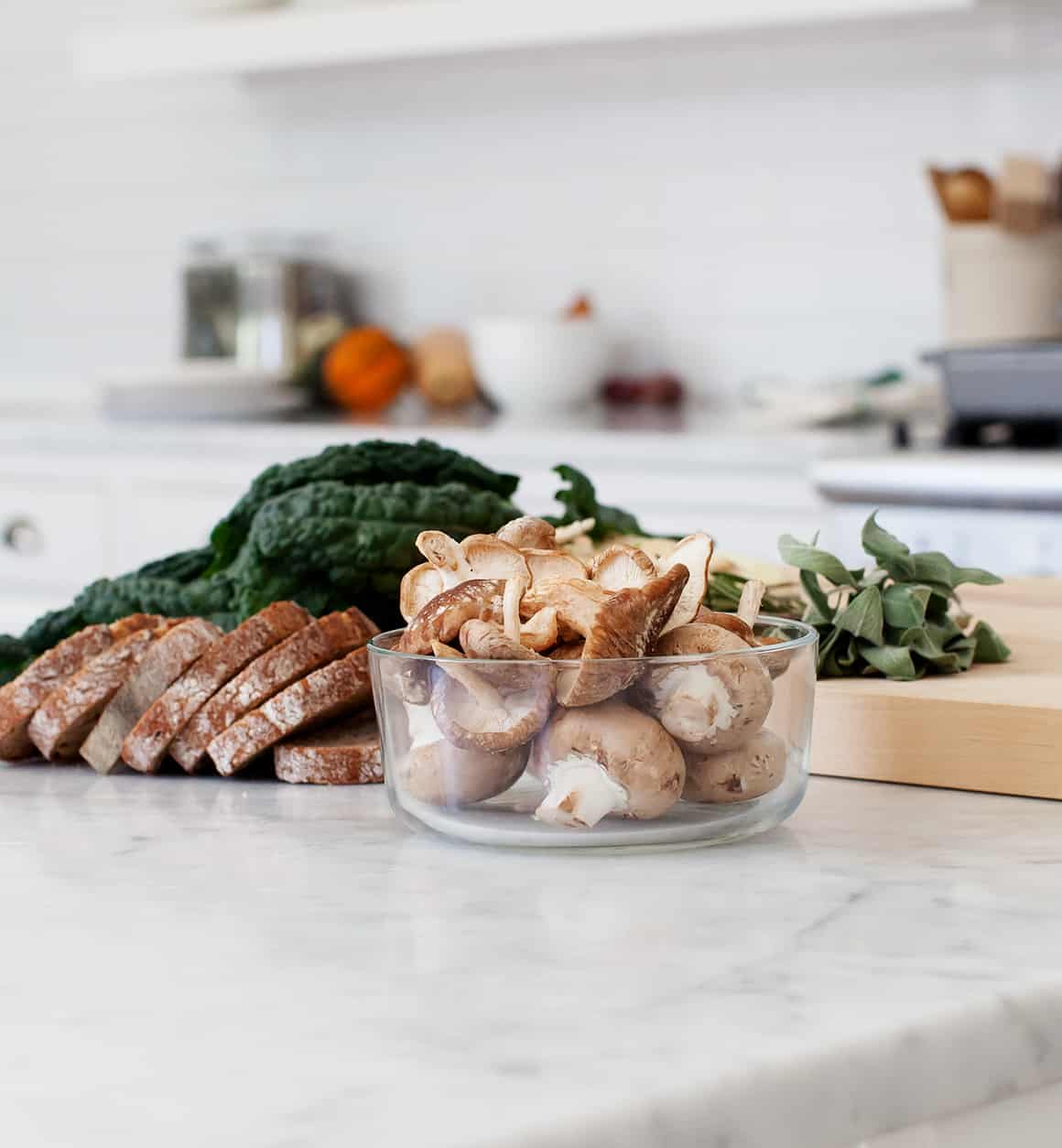 How to Make Vegan Stuffing

This vegan stuffing recipe comes together with just a few simple steps: 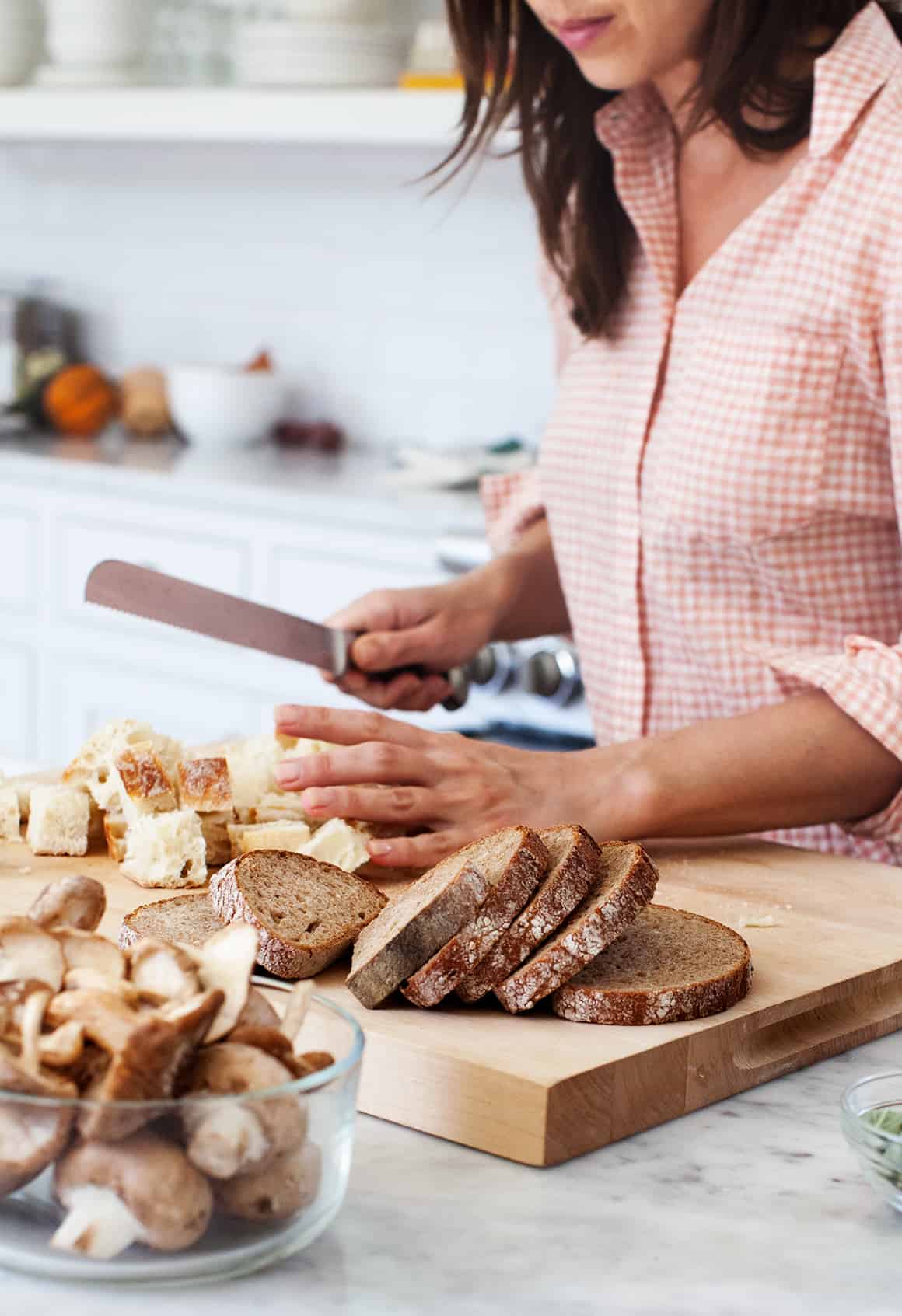 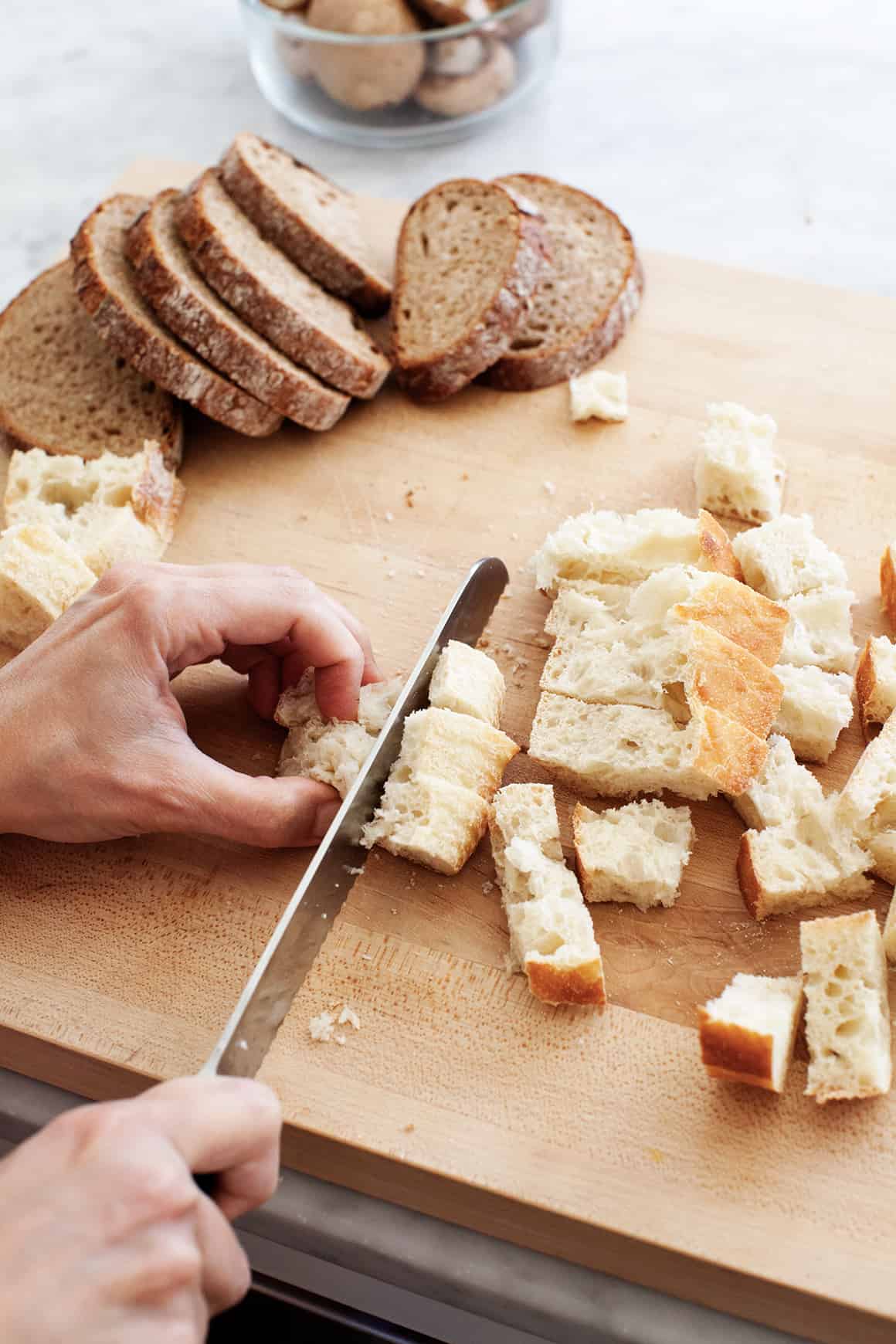 If you’re looking for more recipes to add to your Thanksgiving dinner, you can’t go wrong by trying one (or more!) of these:

And don’t forget the pumpkin pie for dessert! 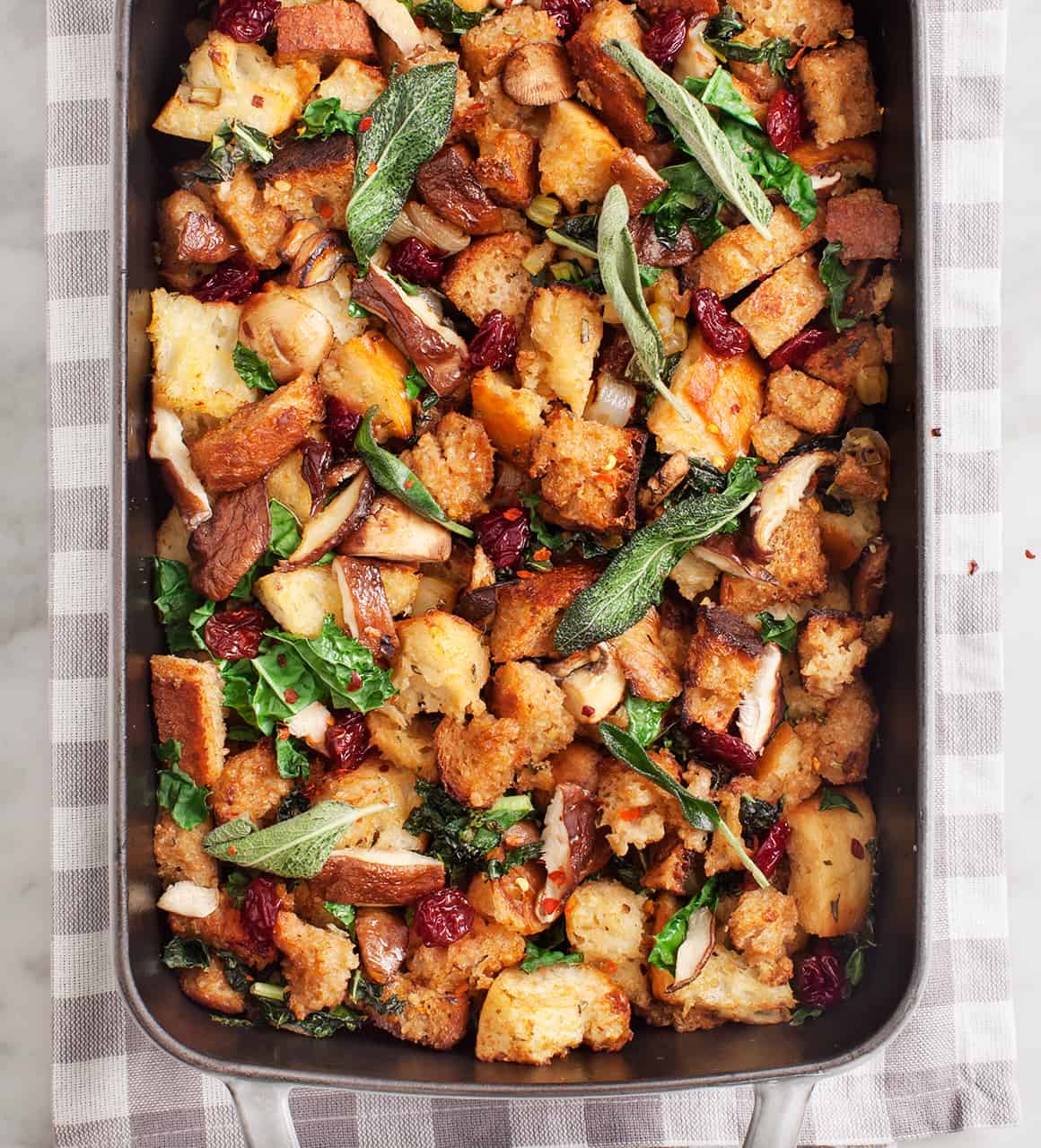 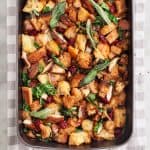 rate this recipe:
5 from 7 votes
Prep Time: 15 mins
Cook Time: 40 mins
Total Time: 55 mins
Serves 8
Pin Recipe Print Recipe
This vegan stuffing recipe is best when it's made with dry, day-old bread. I recommend buying or baking your bread one to three days in advance so that it really soaks up the savory flavor of the onion, celery, mushrooms, and herbs.

To reheat, add a bit more stock and bake until warmed through and slightly crisp on top. *Crusty bakery bread works best in this recipe. Soft sandwich bread will become too soggy.