This easy stuffed peppers recipe is destined for your regular rotation! It's super simple, but the zesty rice filling makes it bold, fresh, and flavorful. 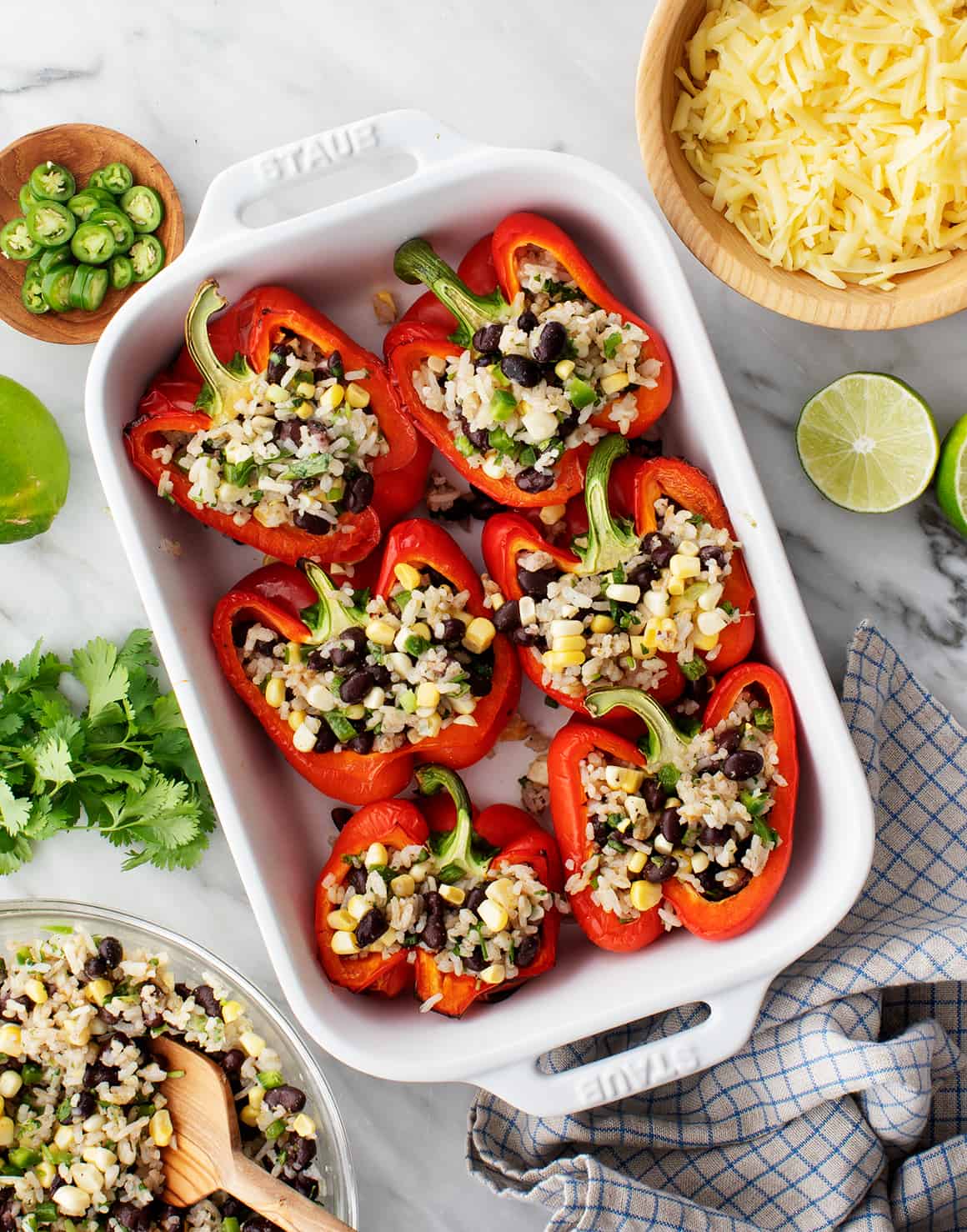 Stuffed peppers are among the handful of dishes that will always remind me of being a kid. Growing up, they were a fixture in my mom’s regular recipe rotation, right alongside creamy broccoli soup, eggplant Parmesan, and mac and cheese. Back then, I’d eat the filling, made from ground beef, Italian seasoning, tomato sauce, and rice, and push aside the pepper. In hindsight, it’s not hard to see why people were surprised when I became a vegetarian. 🙂

Since then, I’ve learned that the pepper itself is an integral part of any stuffed peppers recipe. Don’t get me wrong, the filling here tastes great on its own. Inspired by my cilantro lime rice, it’s a zesty mix of rice, beans, corn, cilantro, and jalapeño. Lime juice and zest brighten it up, and spices like cumin, coriander, and cayenne make it aromatic and complex. By itself, it’s yummy, but the pepper adds sweetness and crunch that turns it into something more.

Like my mom’s stuffed peppers recipe, this one is simple enough to make often. As the weather cools and we start to turn on our ovens again, I hope it will become part of your regular rotation. Fresh, filling, and fun, it’s perfect for this time of year, when peppers are at their peak. 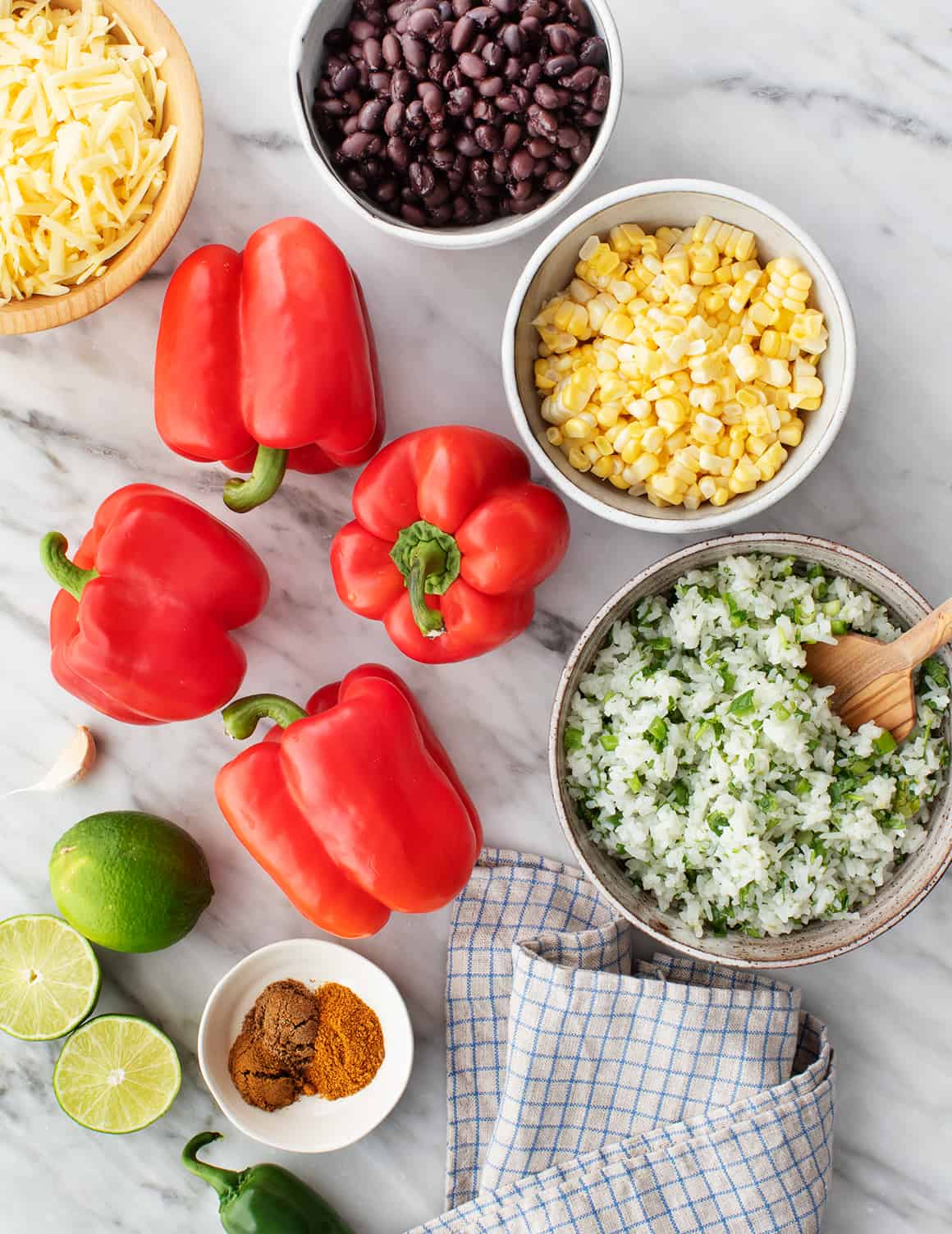 Here’s what you’ll need to make these easy stuffed peppers: 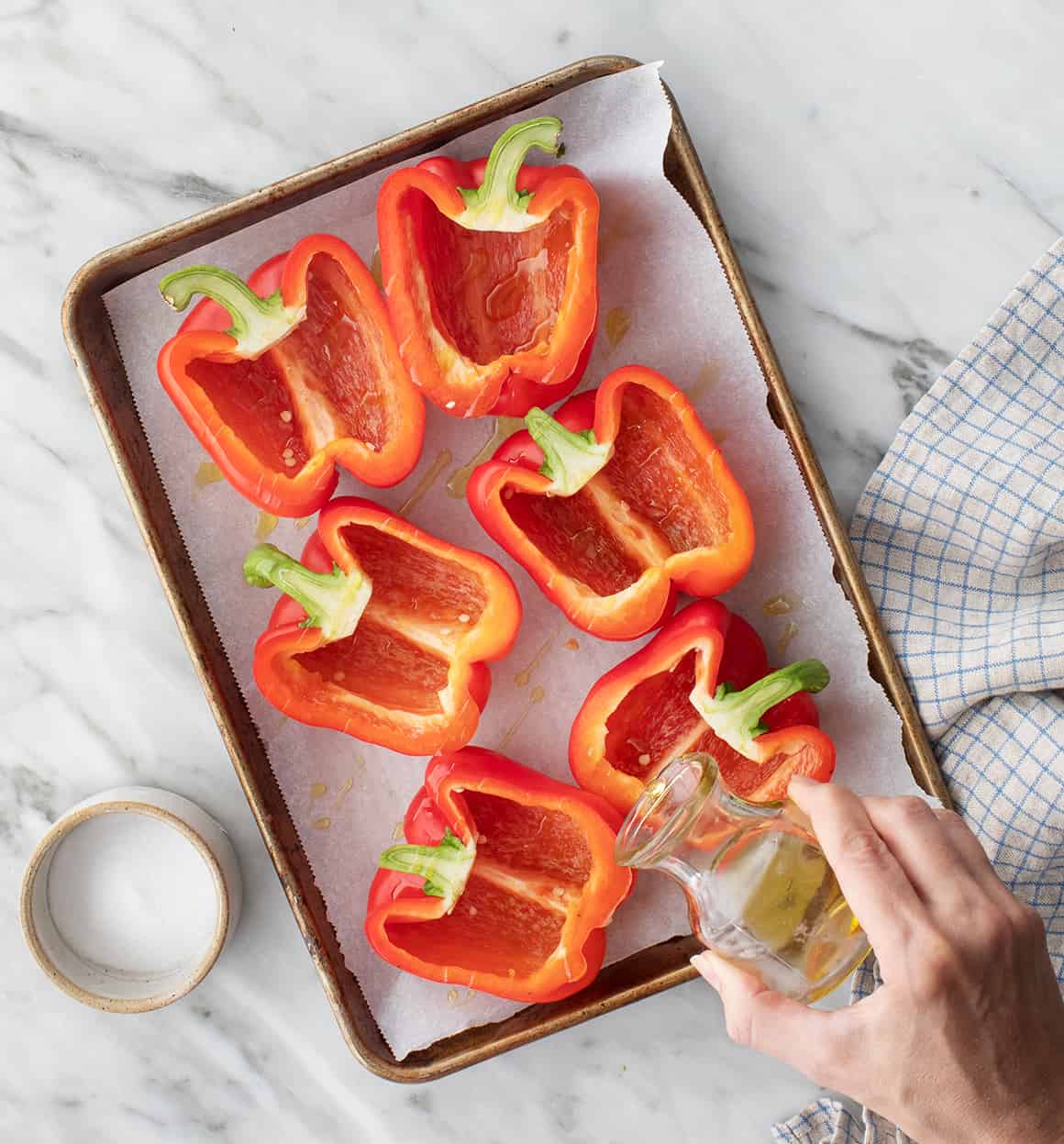 How to Make Stuffed Peppers

This vegetarian stuffed peppers recipe is simple to make! Here’s how it goes:

First, pre-bake the peppers. Slice them in half lengthwise and remove the seeds and membranes. Place them cut-side-up in a baking dish or on a baking sheet, drizzle them with olive oil, and sprinkle them with salt. Bake for 10 minutes at 450°, until they’re starting to soften. Tip out any liquid that pools inside of the peppers, and set them aside. 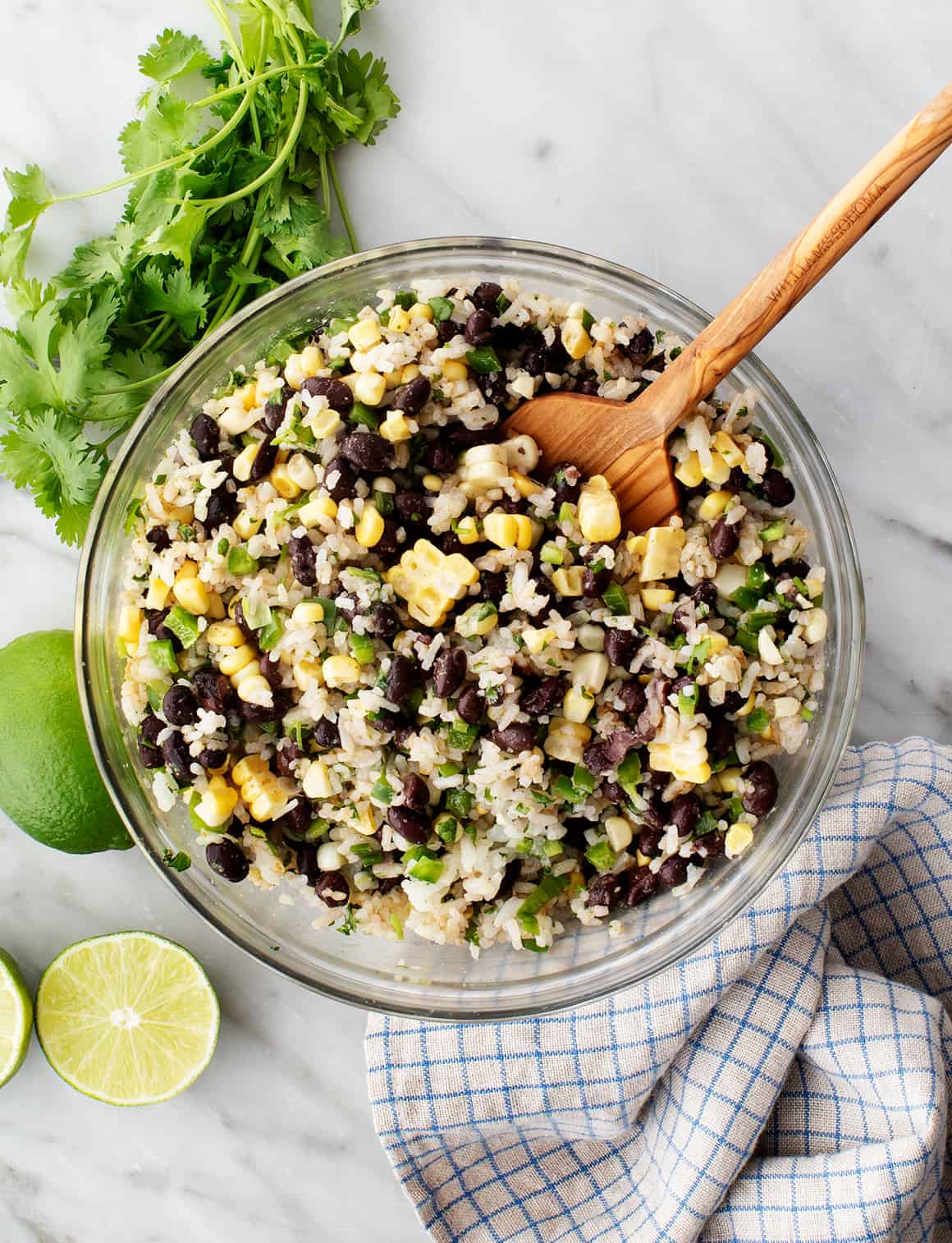 Meanwhile, make the filling. Combine the lime juice and zest, spices, scallions, cilantro, jalapeño, salt, and olive oil at the bottom of a large bowl. Fold in the rice, black beans, and corn, and season to taste with salt and pepper. 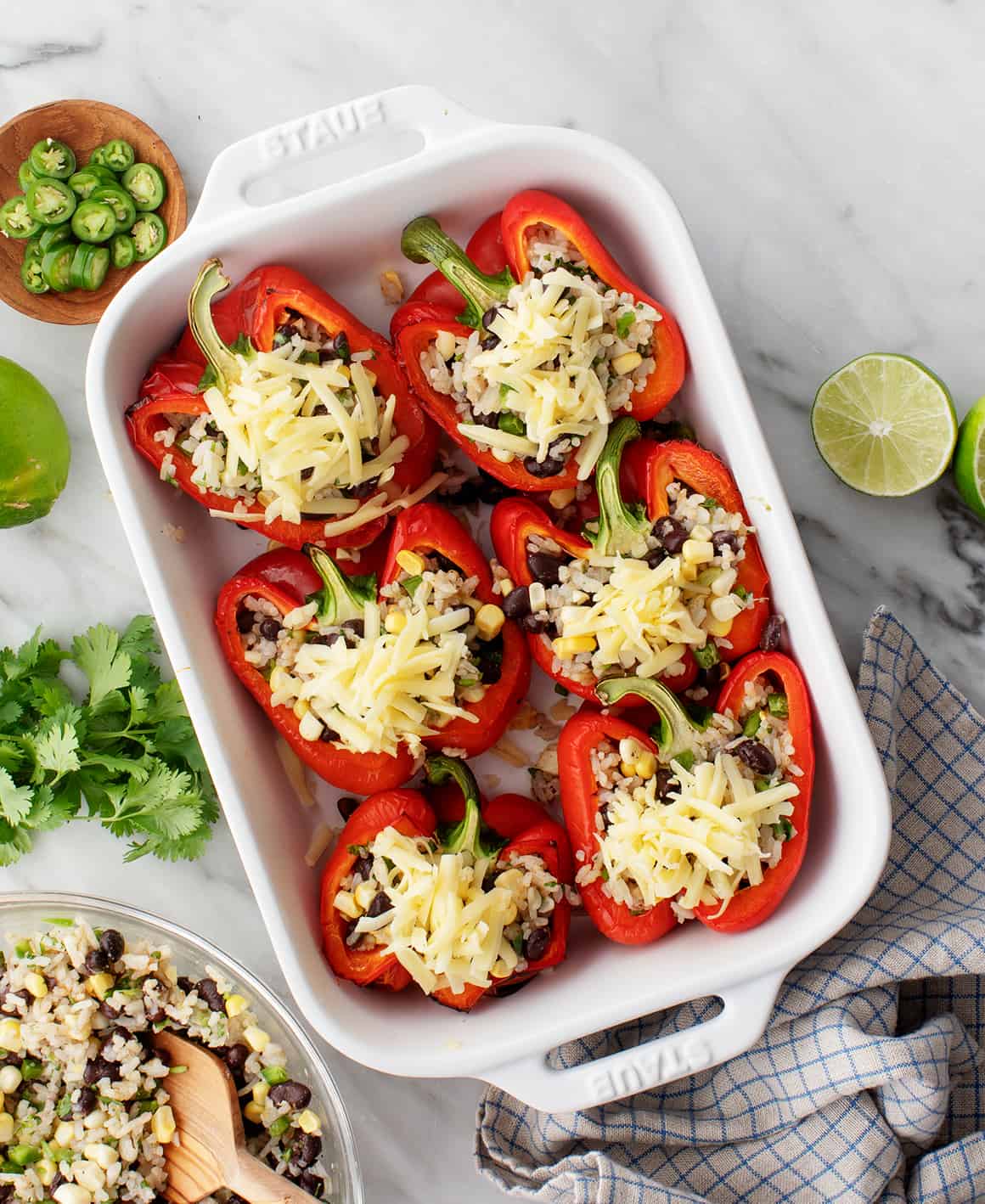 Then, stuff the peppers, and bake again! Pile in the filling, making sure to tuck it into the peppers’ nooks and crannies. Sprinkle them with the shredded cheese, and bake for another 10-15 minutes at 450°, or broil for 2-5 minutes, until the cheese is browned and bubbling.

Allow the peppers to cool slightly, and dig in!

When you’re ready to eat, top the stuffed bell peppers with avocado slices, extra jalapeños (or pickled jalapeños!), and a big squeeze of lime juice. Enjoy them as a side dish with your favorite protein, or make them the main event! If you’re serving them as an entree, pair them with a simple green salad tossed in cilantro lime dressing or any of these delicious salad recipes:

They’d also be fantastic with grilled veggie skewers, grilled eggplant, or grilled zucchini on the side.

Alternatively, make this recipe vegan! Instead of baking the peppers twice, you’ll just cook them once, before you fill them. After they bake, load them up with the filling, and serve them with guacamole or chipotle sauce. Add a spoonful of mango salsa, tomatillo salsa, or pico de gallo to take them over the top!

If you have leftover filling (which you might, depending on the size of your peppers), serve it as a side dish for tacos, or use it as the base of a homemade burrito bowl. Enjoy! 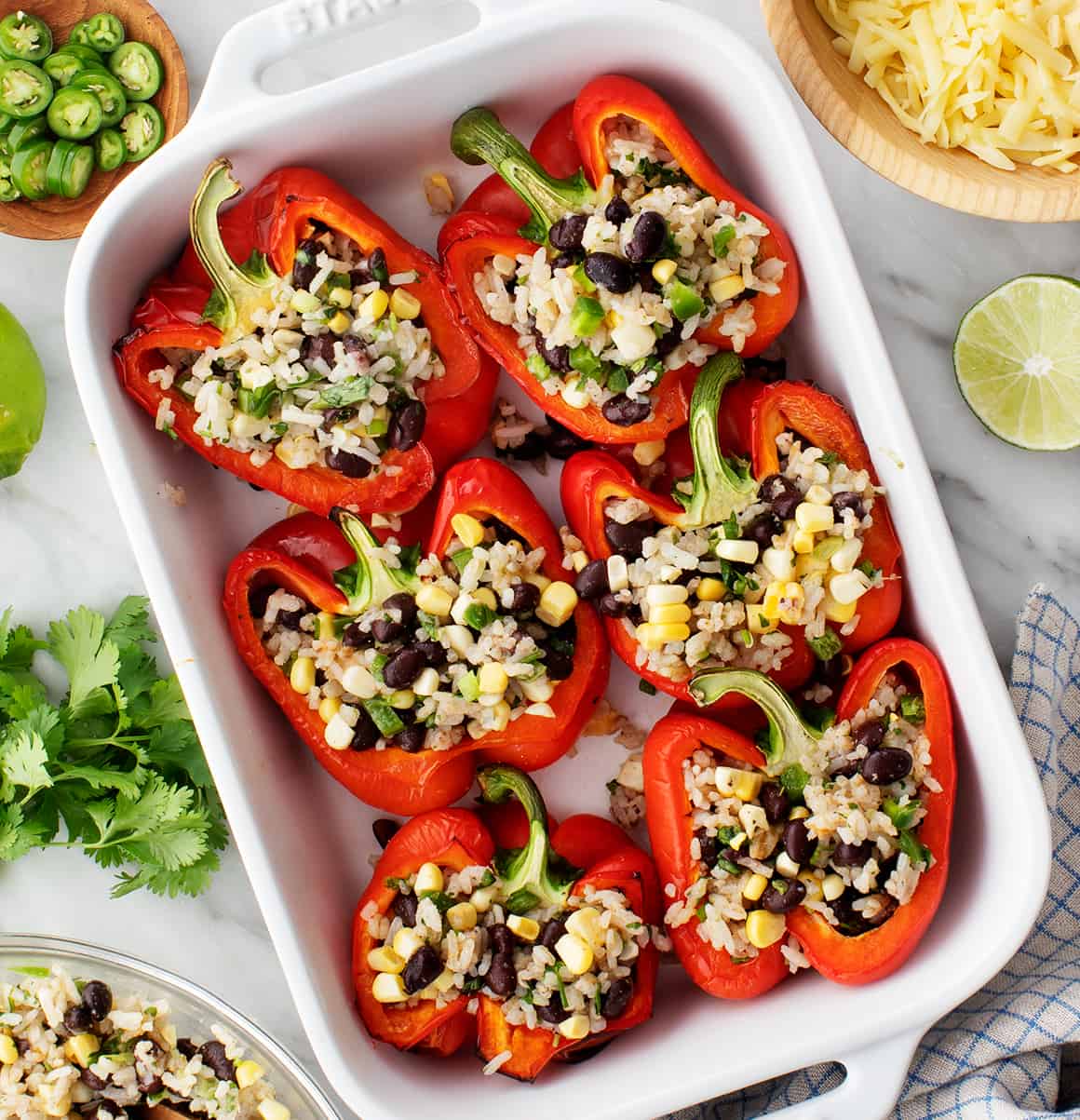 If you love this stuffed peppers recipe, try stuffing one of these veggies next: 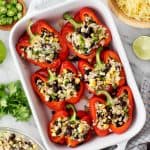 rate this recipe:
4.88 from 16 votes
Prep Time: 20 mins
Cook Time: 20 mins
Serves 4 to 6
Pin Recipe Print Recipe
This easy stuffed peppers recipe is fresh, healthy, and delicious! Top the peppers with cheese, or skip it, and serve them with guacamole or chipotle sauce for a vegan variation.

Vegan version: Skip the cheese. Don’t bake the peppers the second time, and serve them with guacamole or chipotle sauce.
Did you make the recipe? I want to see!
Tag @loveandlemons on Instagram.
✕
Free Bonus:
5-Part Guide to Delicious Vegetarian Eating!