Making roasted red peppers at home couldn't be easier! I love having them on hand to punch up the flavor in sauces, sandwiches, scrambles, and more. 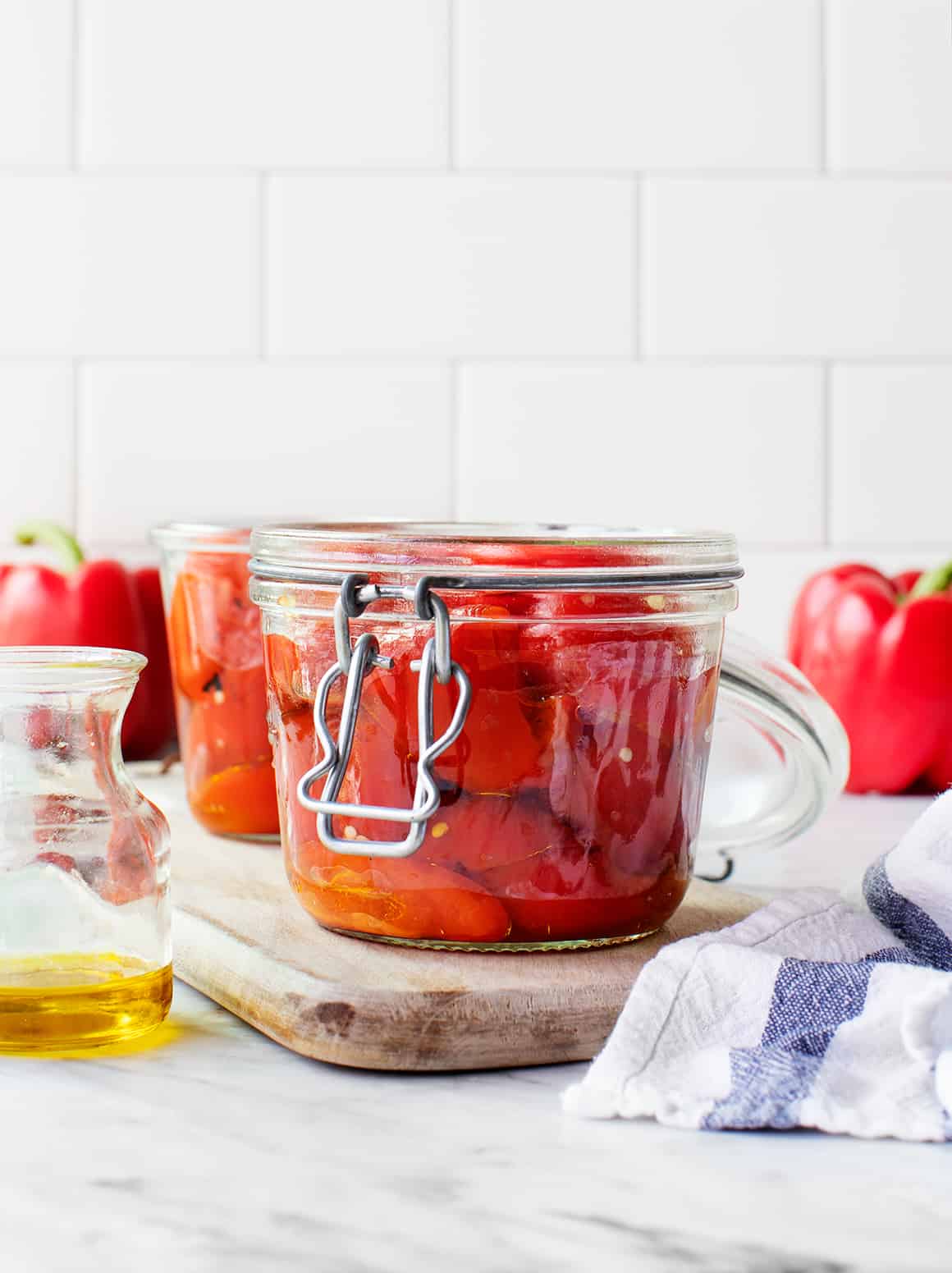 Last week, I finished up this fajita recipe, and I still had an abundance of bell peppers in the fridge. I debated what to do with them – Toss them into salad? Sauté them for my breakfast tacos? – but in the end, I settled on making roasted red peppers to have on hand for summer sauces, pizzas, pastas, and more.

If you’ve never made roasted red peppers, it’s super easy, and when they’re finished, the peppers have a lightly sweet, charred flavor that’s a delicious addition to all sorts of recipes. They keep for several weeks in the fridge, so make a big batch to blend in to your next dressing, top onto a sandwich, or serve as a simple appetizer with summer herbs, sea salt, freshly ground black pepper, and a drizzle of extra-virgin olive oil. 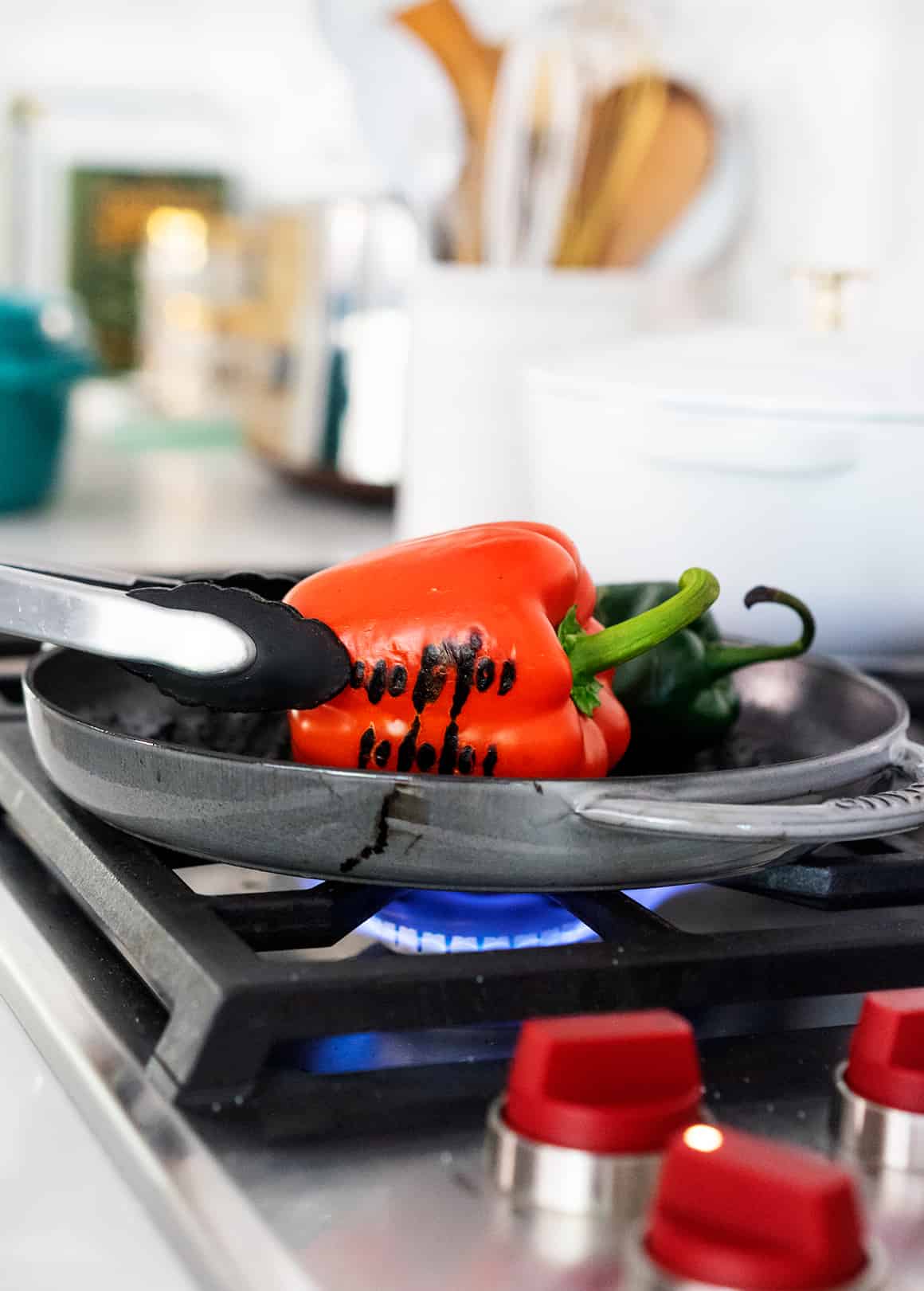 How to Roast Red Peppers

There are a few ways to make roasted red peppers at home. My preferred method for roasting is over a gas burner. I’ll either use a grill pan or char them directly over the gas flame. Of course, you can also roast the peppers in the oven. Here’s what you need to do: 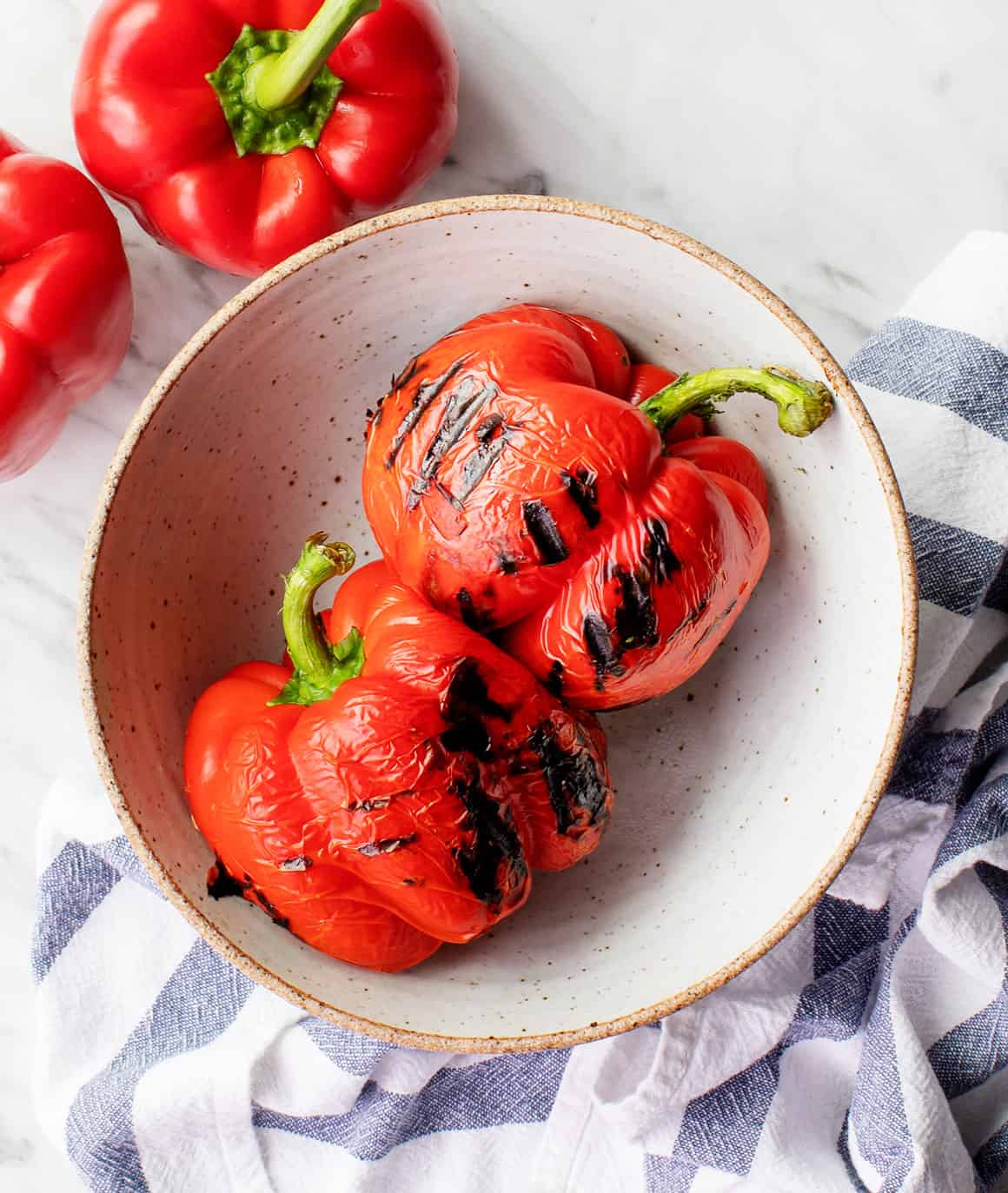 1. Char the peppers whole over a gas burner, on a grill pan, or under a broiler until the skin is blackened all over.

2. Then, take them off the heat and place them in bowl. Cover the bowl with a kitchen towel or plastic wrap, and allow the peppers to steam and soften for 10 minutes. 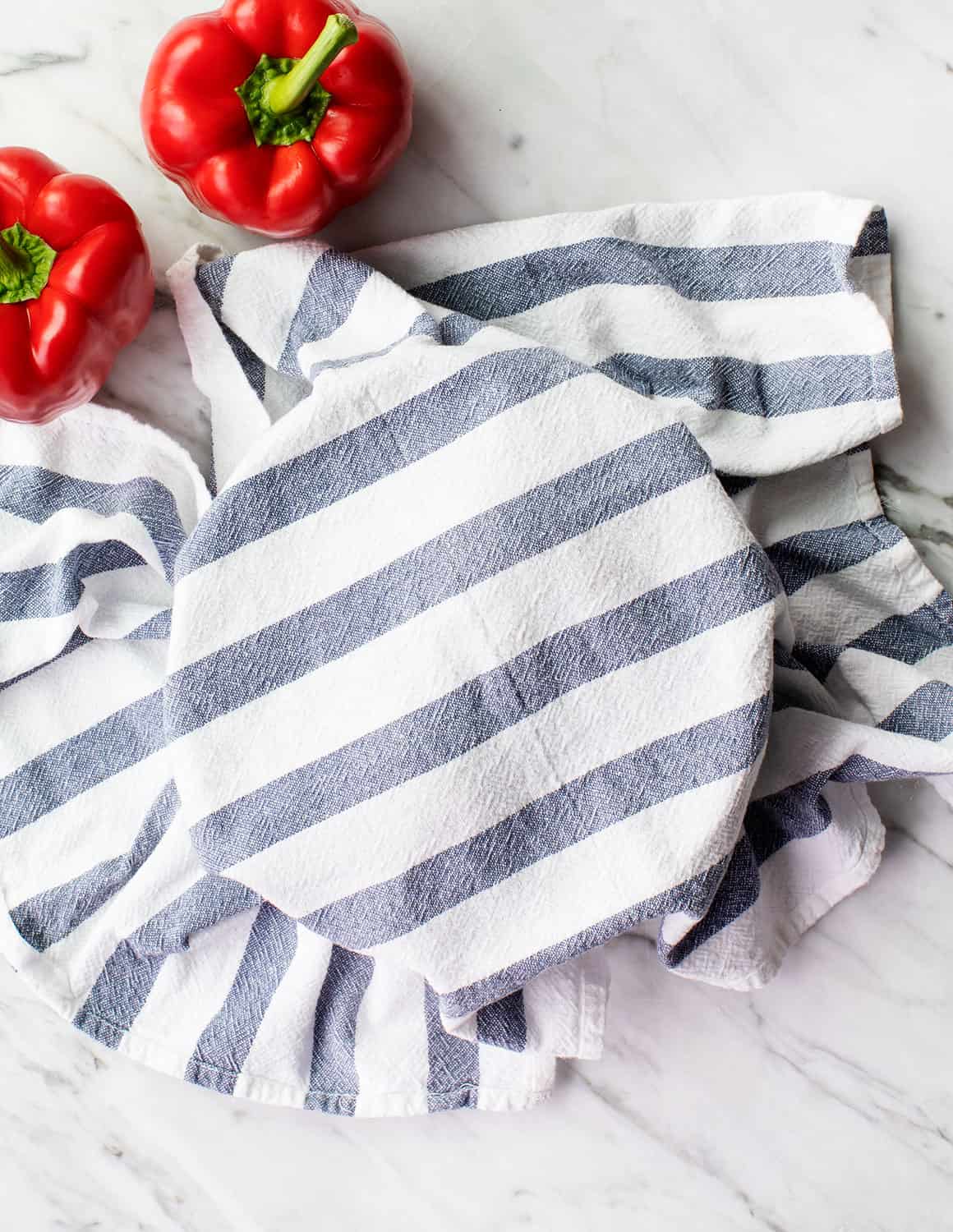 3. When the peppers are cool enough to handle, peel and remove the loose skin. I like to leave just a bit of the blackened skin for a nice charred flavor.

4. Finally, slice off the stem and remove the membranes and seeds. At this point, you can leave the peppers whole or slice them into strips, depending on how you plan to use them. 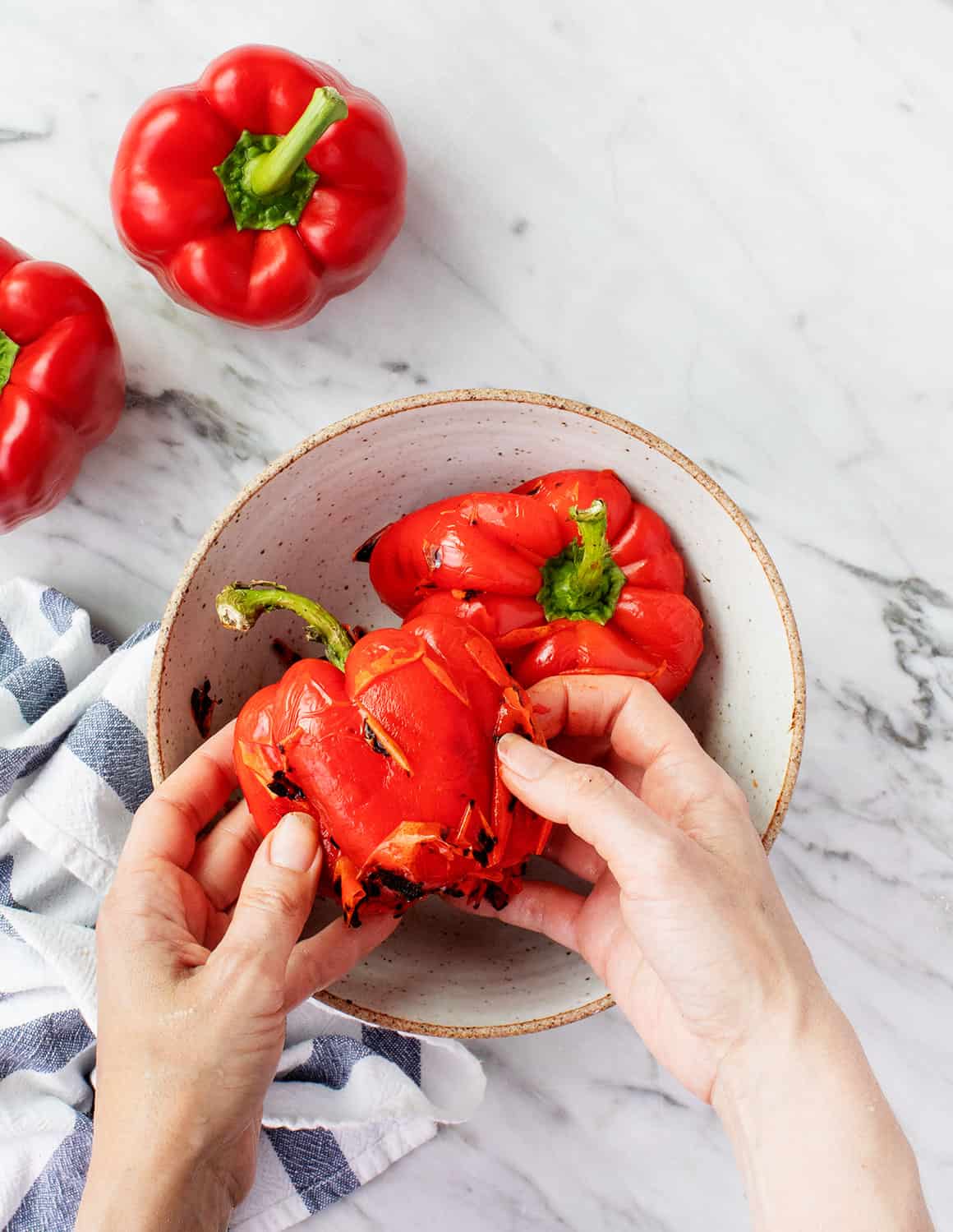 How to Store Roasted Red Peppers

Roasted red peppers are ready to use as soon as you’ve peeled off the skins and removed their seeds. If you’re roasting one as part of a larger recipe, you can proceed with it right away.

If you’re preparing a larger batch to keep on hand, allow them to cool completely before transferring them to the fridge. To keep them fresh, store the peppers in a jar with a tight-fitting lid and pour olive oil over the peppers to cover. Be sure to keep them submerged in the oil for maximum freshness! Stored this way, they should last for 2-3 weeks in the fridge.

Alternatively, freeze your roasted red peppers for longer storage. Spread them in a single layer on a parchment-lined baking sheet to freeze individually before transferring them to an airtight, freezer-safe container. 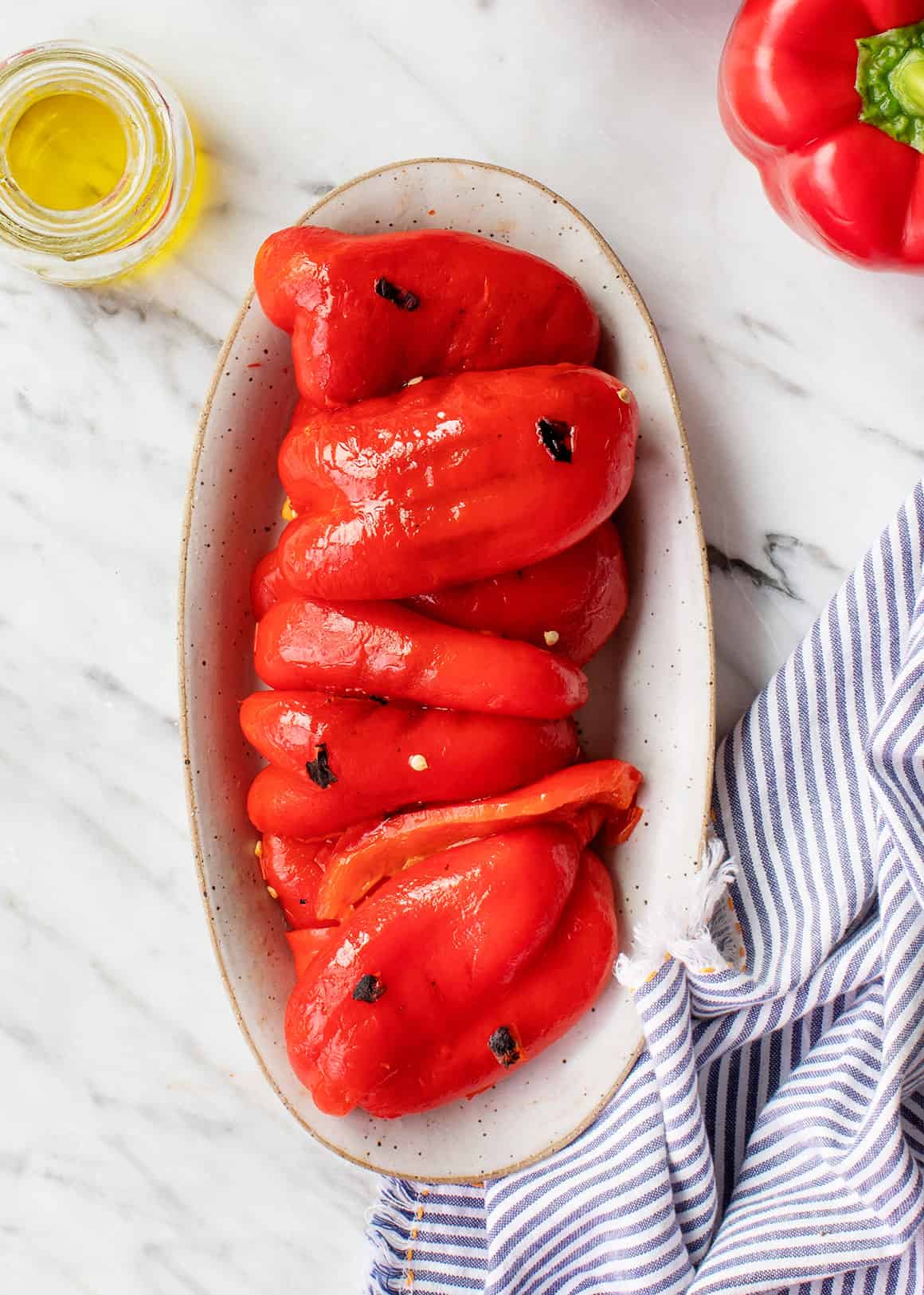 What to Do With Roasted Red Peppers

Once you’ve roasted your peppers, you have endless options for using them. Here are just a few ideas:

What do you like to do with roasted red peppers? Let me know in the comments! 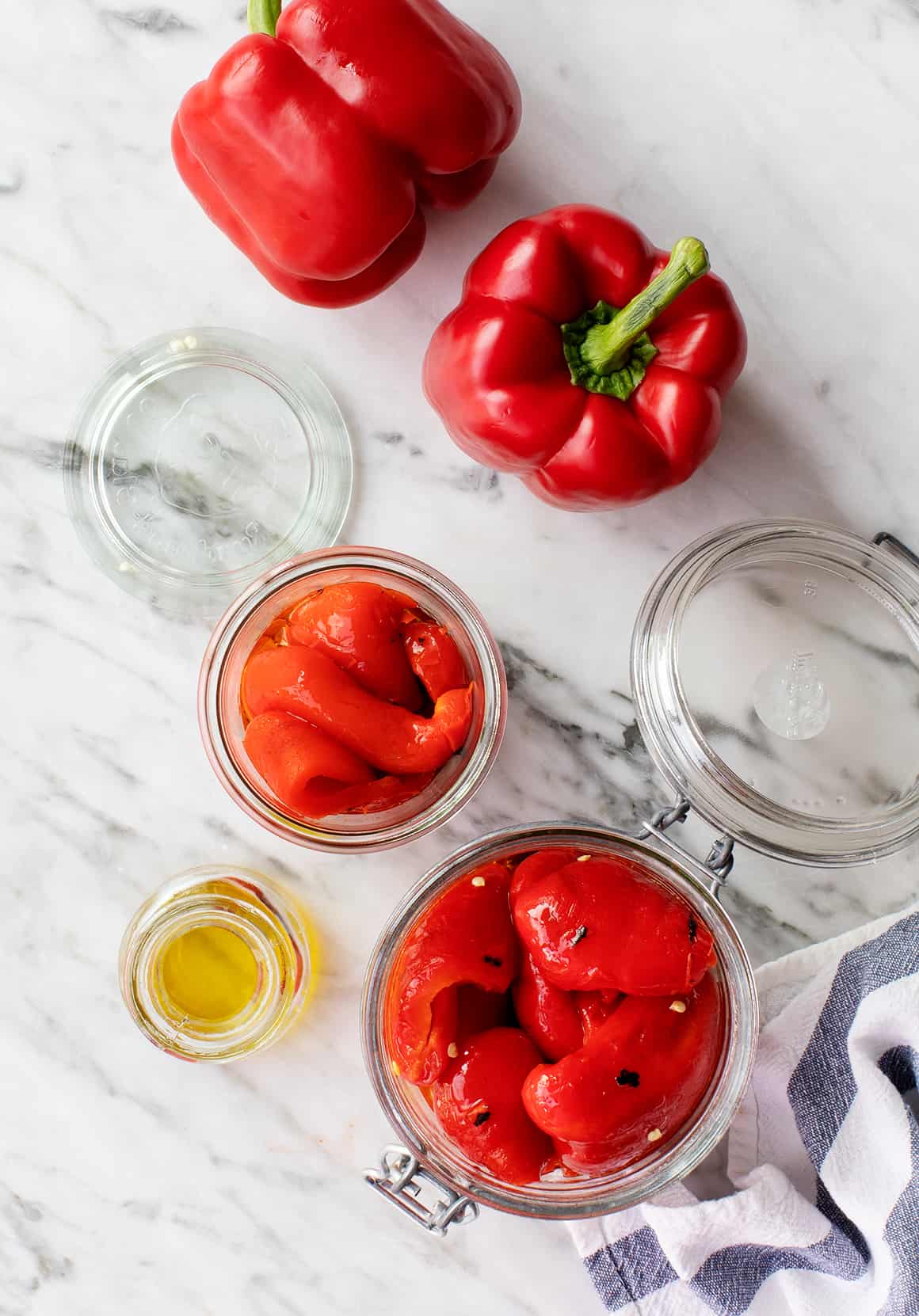 If you love these roasted red peppers… 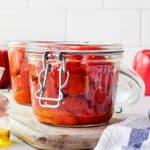