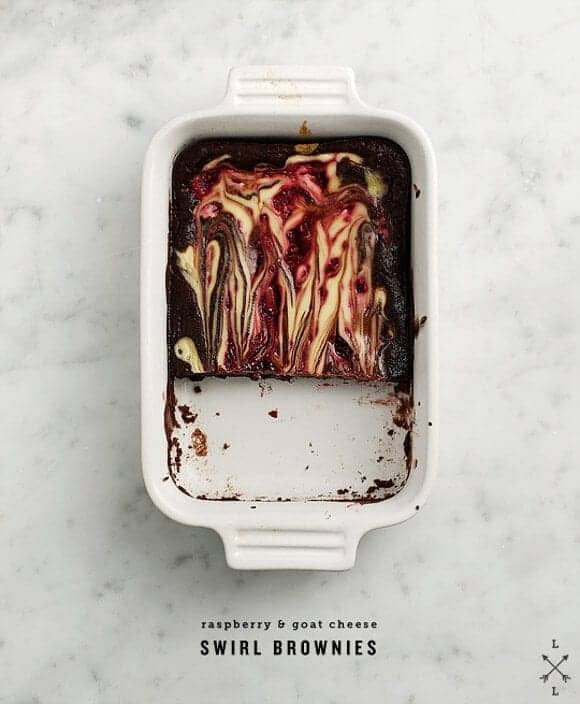 This might be somewhat of a surprising thing to see here, considering I’m not a fan of goat cheese. But Jack is (that’s an understatement)… and literally this is all of his favorite things packed into one decadent dessert. Months ago, I saw this recipe on The Kitchn, and I immediately knew I’d surprise him with it for his birthday.

Of course I’m not going to sit by and watch him eat a pan of brownies all by himself. So I made two versions, a (non-dairy) cream cheese version for me, and this goat cheese version for him. (This was easy to split up without much extra work).

I made a few other healthier alterations – I used maple syrup instead of sugar, oat flour instead of all-purpose, and I used vegan versions of butter and cream cheese. I used a couple of eggs, but you could easily sub those out and this would be vegan. And this happens to already be gluten free!

adapted from The Kitchn

Print
Prep time
20 mins
Cook time
25 mins
Total time
45 mins
Author: Jeanine Donofrio
Serves: 16
Ingredients
For the brownies:
For the cheese swirl*:
Instructions
Notes
*I mixed this without goat cheese, divided it in half, and then added the goat cheese to only one half.
3.4.3177
Did you make the recipe? I want to see!
Tag @loveandlemons on Instagram.
✕
Free Bonus:
5 Secrets to Easy & Delicious Baking