This pumpkin pudding recipe is far easier than pie, but it's just as delicious! I love to serve it with toasted pecans for extra richness and crunch. 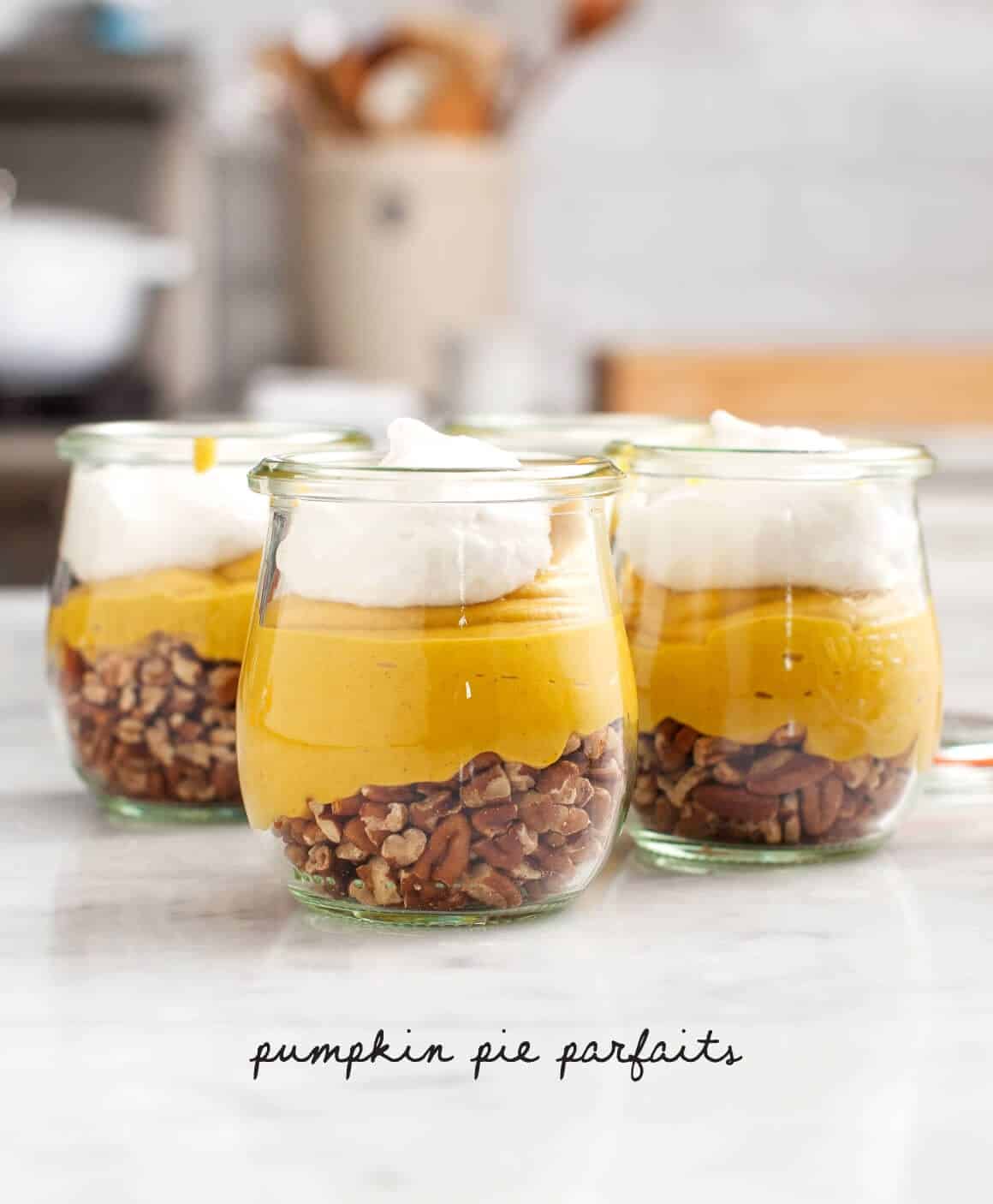 This pumpkin pudding is my grown-up version of the pumpkin pie I adored as a kid. Back then, my favorite thing about Thanksgiving was hands down the pumpkin pie. Or, more accurately, the pumpkin pie filling. My sister and I (being the picky eaters that we were) would scoop out the creamy pumpkin middle and leave the shells of our crusts behind. The adults would shake their heads. Sometimes I’d eat the crispy edge piece, but the soggy bottom crust? No thank you.

Now that I’m an adult, I wouldn’t push my crust aside, but pumpkin pie’s creamy filling is still my favorite part. This pumpkin pudding recipe lets me enjoy the richly spiced pumpkin custard that I crave each fall, but I don’t have to bother with the trouble of making pie crust. How perfect is that?!

This pumpkin pudding recipe isn’t a conventional Thanksgiving dessert, but I hope you’ll try it nonetheless. It’s super rich and creamy, and maple, vanilla, and cinnamon fill it with warm autumn flavor. If you’re anything like me, you’ll have a hard time not devouring it all straight from the blender! 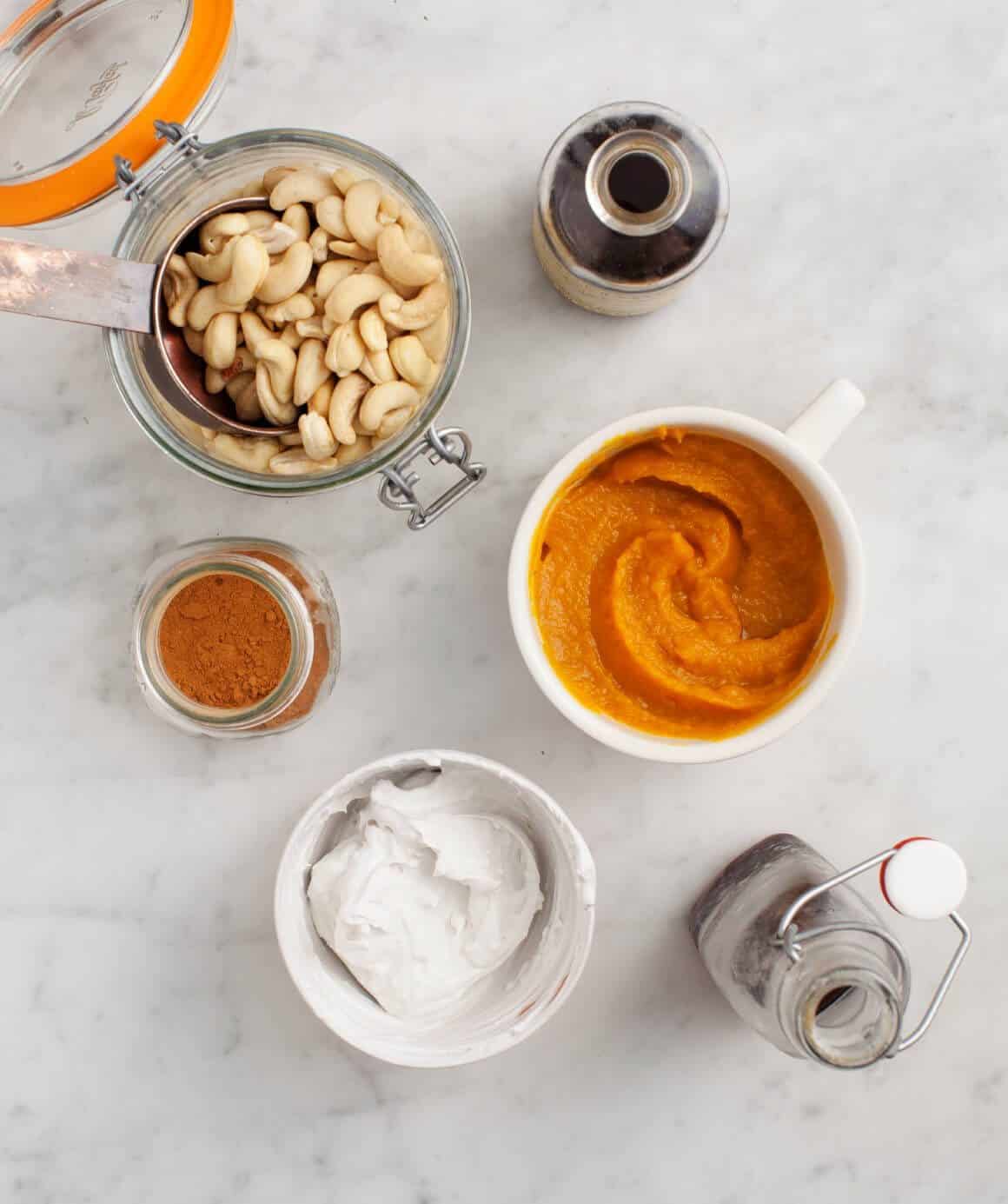 This pumpkin pudding recipe comes with two options – they both tasted so good that I couldn’t choose a winner! One pudding mixture gets its creamy texture from cashews and coconut milk, so you’ll need a high-speed blender to make it. The other uses coconut cream and almond butter, and it will work with any blender or food processor. In both versions, these key ingredients make the pumpkin pudding sweet, flavorful, and, well, pumpkin-y: 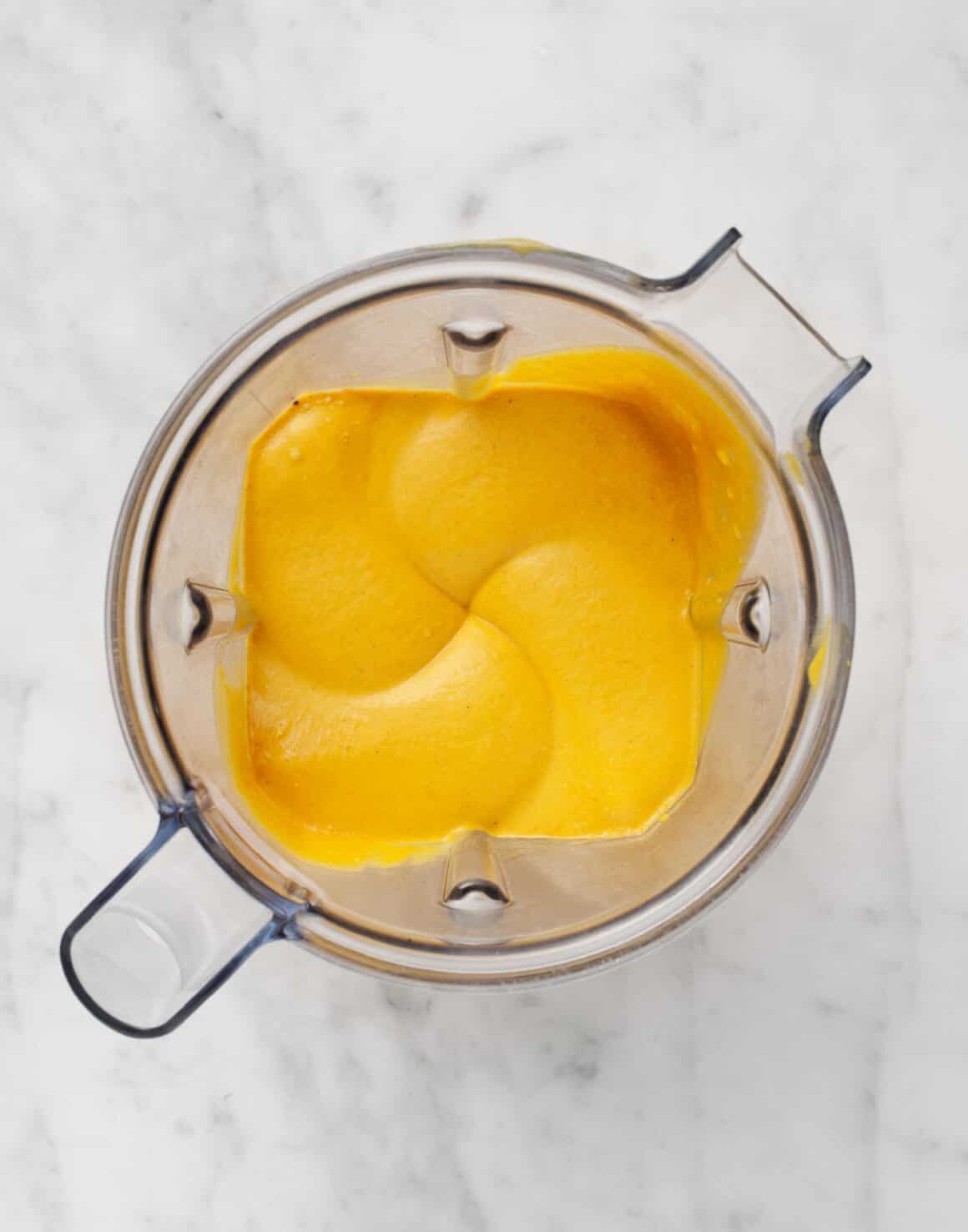 Blend up the ingredients for whichever option you choose – the cashew one or the almond butter one. Then, pour the pumpkin mixture into a large bowl and allow it to set in the fridge overnight, or for at least 4 hours. That’s it! 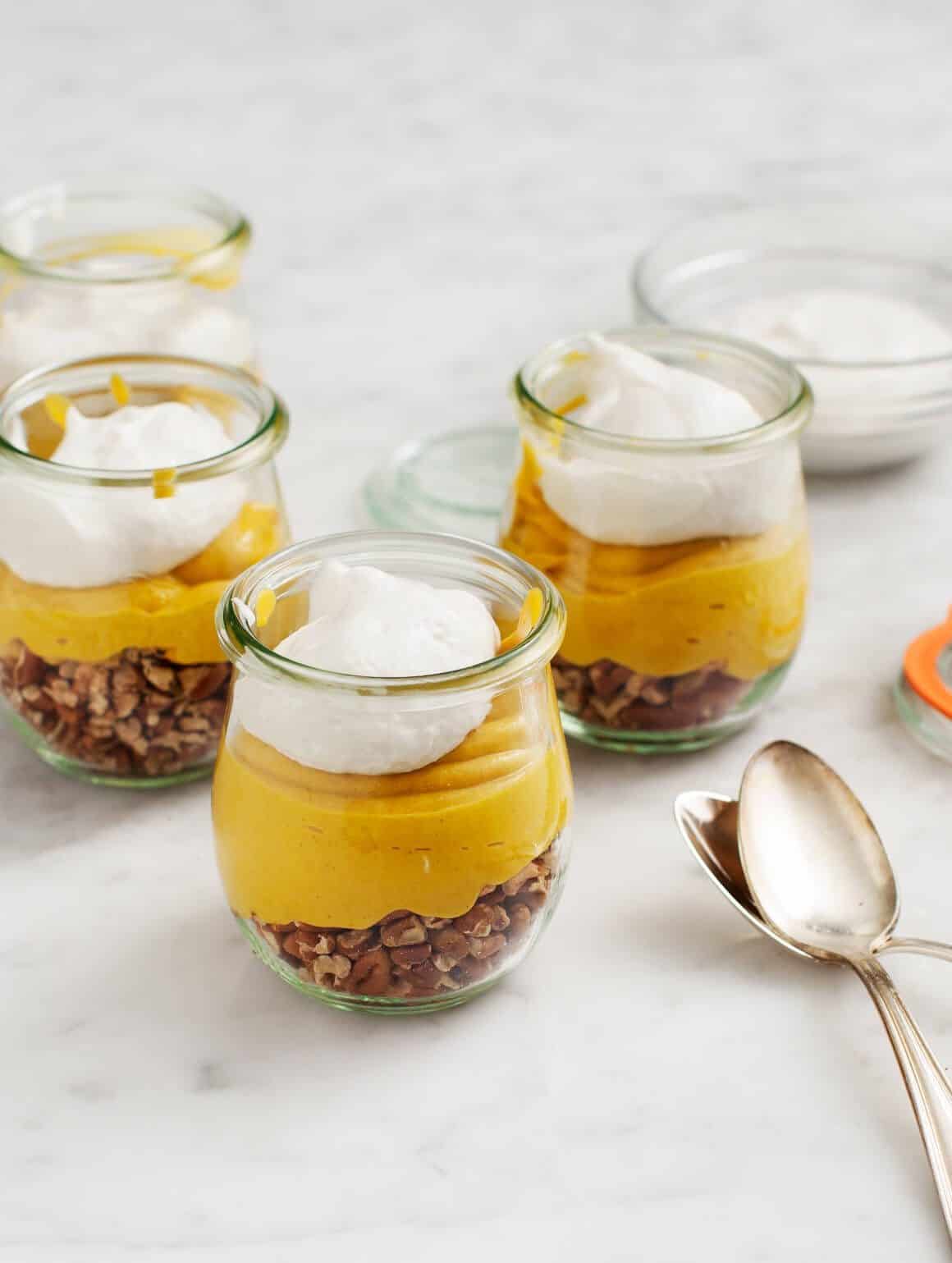 You could easily enjoy this pumpkin pudding on its own, straight from the fridge, but I usually serve it in these cute little parfaits. I layer toasted pecans on the bottom for extra richness and crunch, dollop in the pudding, and top it off with a scoop of coconut whipped cream. Change them up by swapping homemade granola for the pecans or dusting a layer of cinnamon on top.

If you don’t have jars like these, serve the pumpkin pudding in parfait glasses or any small serving dishes you like. 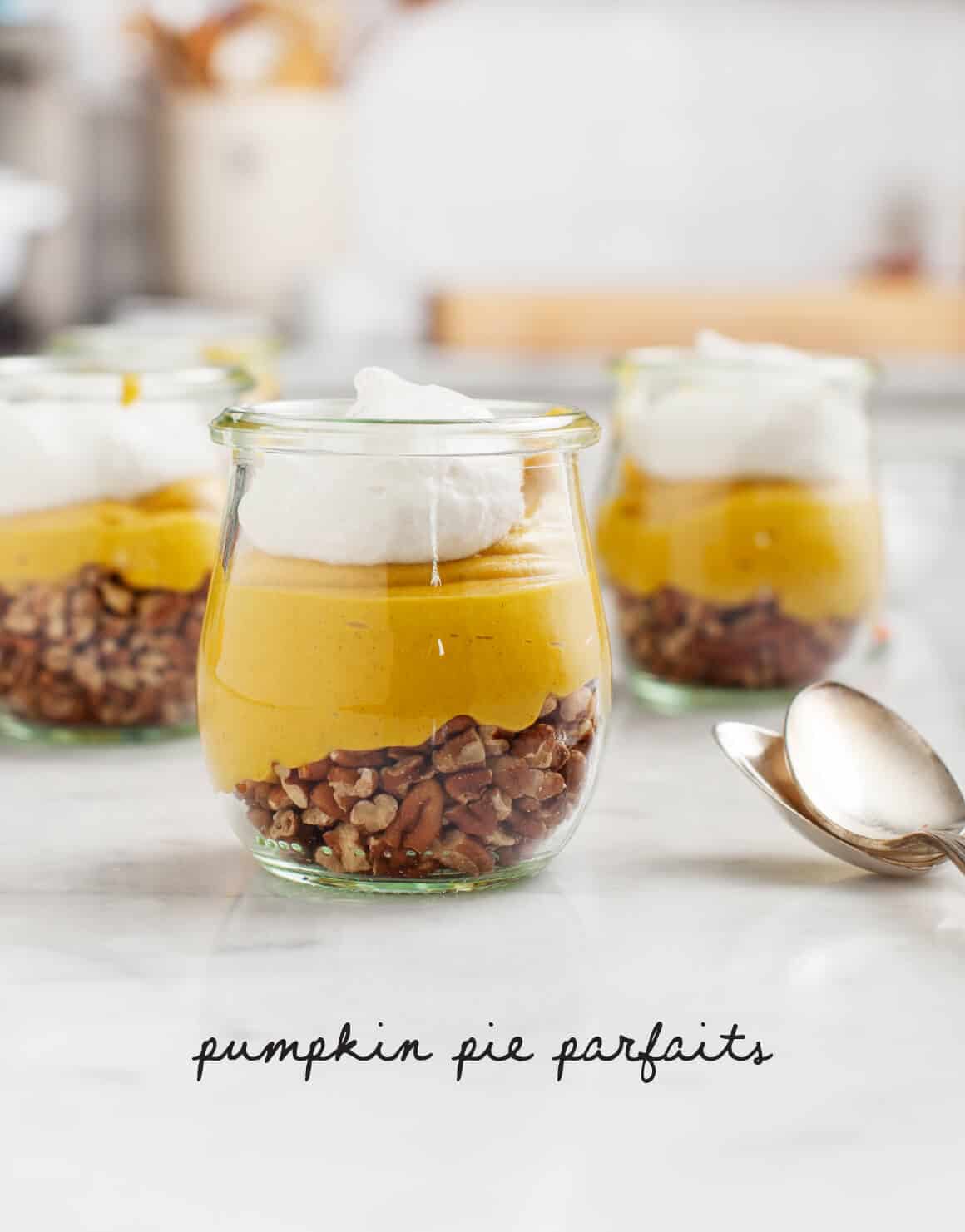 If you love this homemade pumpkin pudding recipe, try one of these fall treats next:

Print
Prep time
6 hours
Total time
6 hours
This creamy pumpkin pudding recipe is easier than pie, but it's every bit as delicious. I like to serve it over a layer of toasted pecans for extra richness and crunch.
Author: Jeanine Donofrio
Recipe type: Dessert
Serves: 4
Ingredients
Pumpkin Pudding, Option #1
(this version works best with a high powered blender)
Pumpkin Pudding, Option #2
(this recipe will work with any blender or food processor)
For the parfaits:
Instructions
Notes
*Refrigerate 1 (14-ounce) can of coconut milk overnight. Scoop thick solids off top.
3.4.3177
Did you make the recipe? I want to see!
Tag @loveandlemons on Instagram.
✕
Free Bonus:
5 Secrets to Easy & Delicious Baking