Once you start making this homemade pita bread recipe, you won't be able to stop! Soft, puffy, and flavorful, it beats any kind from the grocery store. 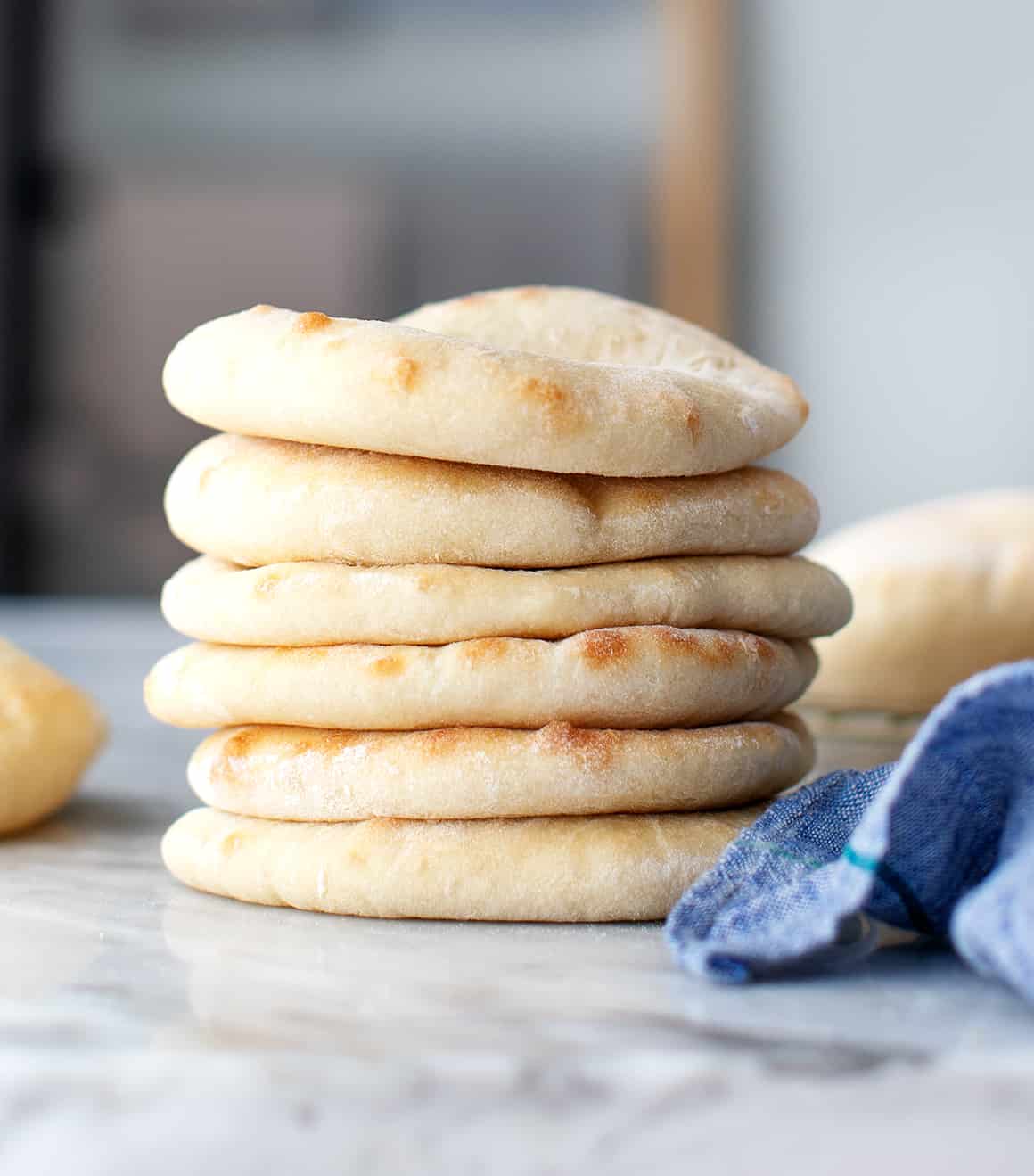 This homemade pita bread recipe comes from my friend Molly Yeh’s Short Stack Yogurt cookbook. It’s been on my list to try since the book was first released two years ago, but for one reason or another, I never made it until this spring. When I finally did, what Jack and I thought would be a fun, one-time cooking project turned into a full-on pita bread obsession. We started putting extra yogurt on the grocery list just so we could make it!

If you’re thinking, “Wait. Yogurt? In pita bread?”, you’re not crazy. It’s not a typical pita bread recipe ingredient, but Molly’s book is all about yogurt – how it’s a versatile, flavorful ingredient that happens to be good for you too. She uses it in a huge range of recipes – from soup to cookies to ranch dressing and mac and cheese.

In my opinion, it’s the secret ingredient that makes this pita bread so exceptional. It’s not only thicker, softer, and puffier than any other homemade or store bought pita I’ve tried, but also it has a tangy, sourdough-like flavor. It’s just as delicious plain as it is with a filling or a dip, and as Molly writes, it’d make a pretty great sleeping bag too. If your experience is anything like ours, once you start making it, you won’t be able to stop. 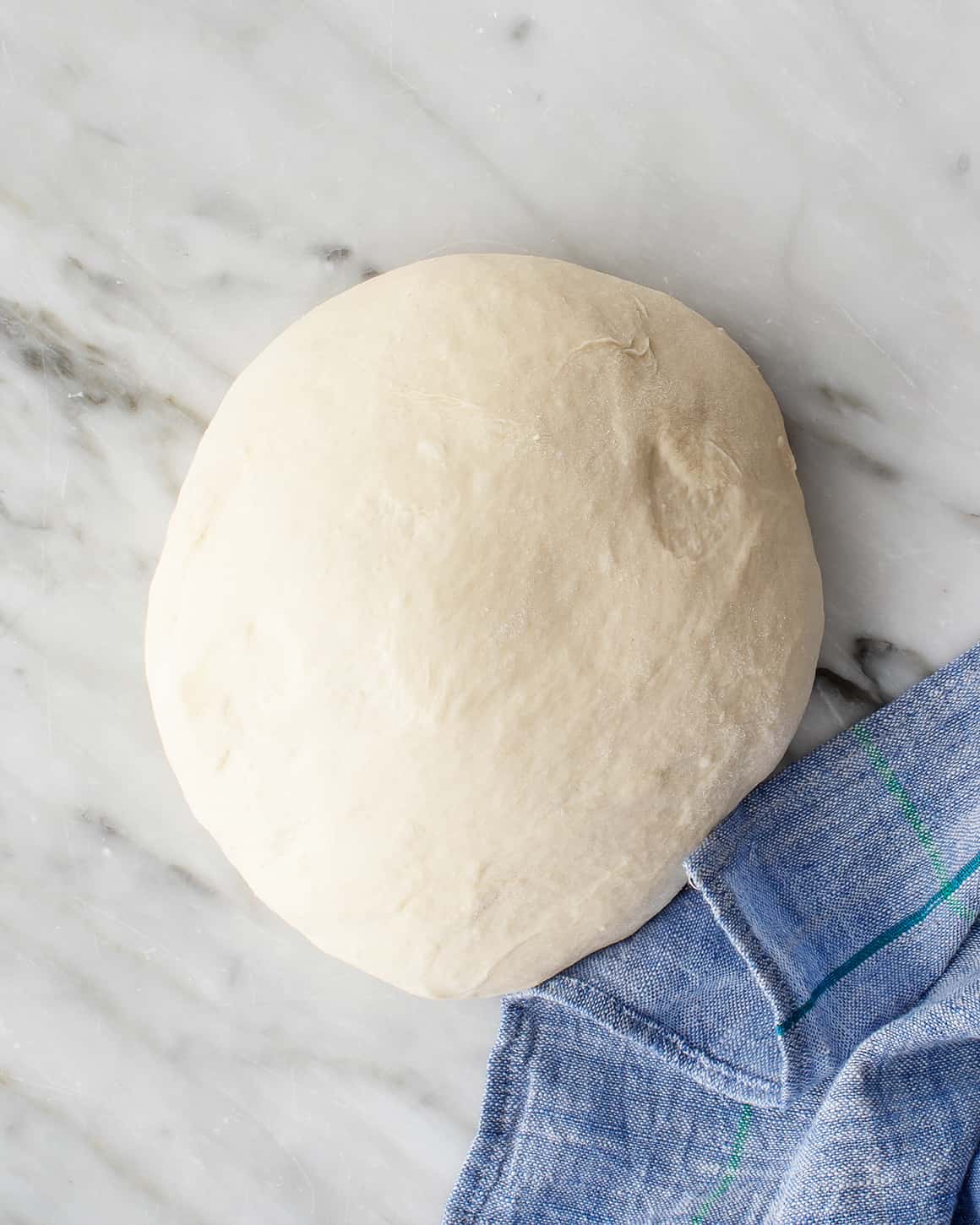 How to Make Pita Bread

This pita bread recipe is easy to make! Here’s how it goes:

First, make the dough. Activate the yeast by mixing it with warm water and a teaspoon of sugar. When the yeast mixture foams, add it to the bowl of a stand mixer fitted with a paddle attachment, and mix it with the flour, salt, remaining sugar, oil, and yogurt. Knead the dough, either with the stand mixer or by hand, until it’s soft and slightly sticky, 7 to 10 minutes. 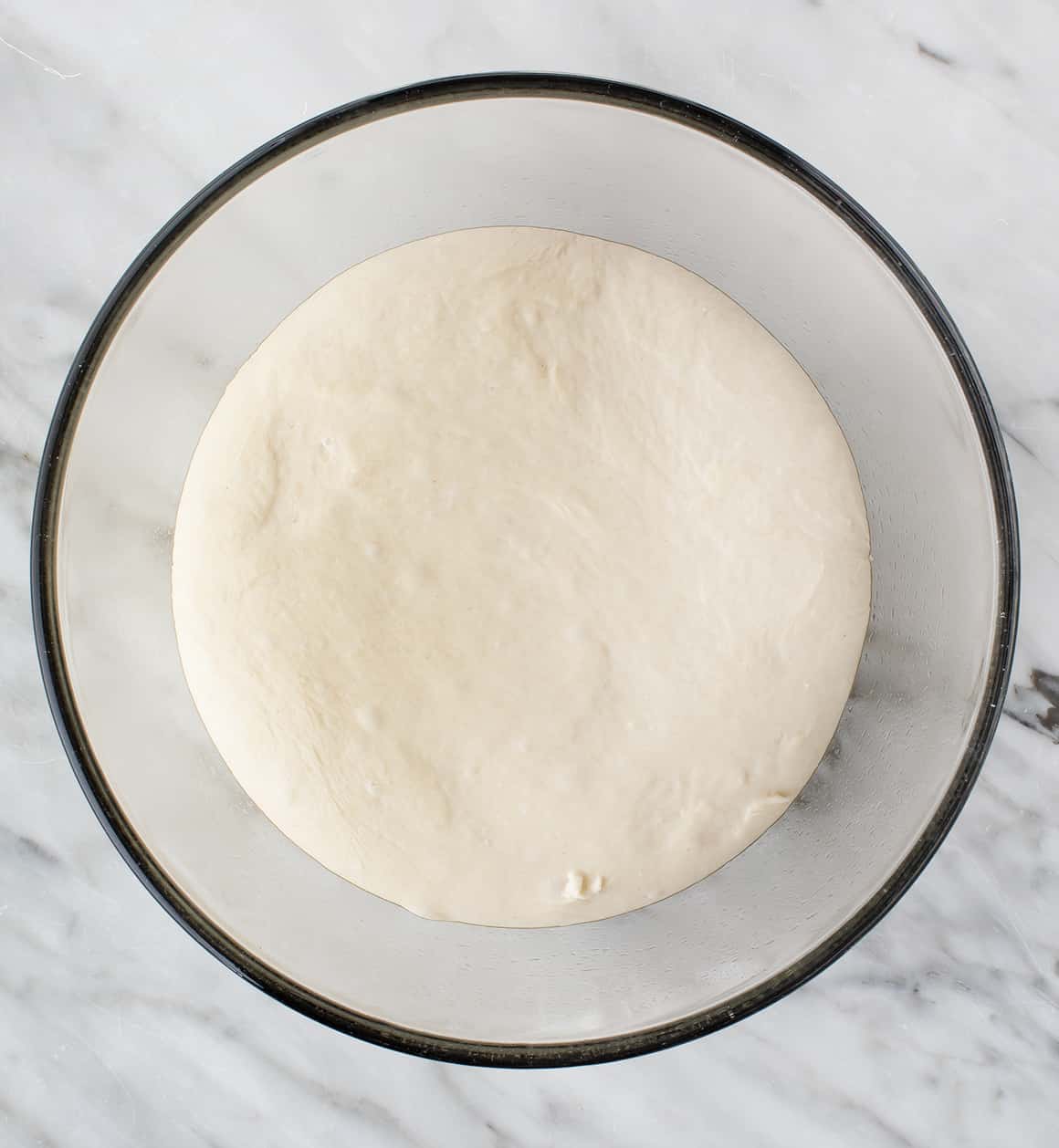 Once you’ve kneaded the dough, let it rise. Transfer it to an oiled bowl and cover it with a kitchen towel or plastic wrap. Set it aside for about 2 hours, or until the dough has doubled in size. 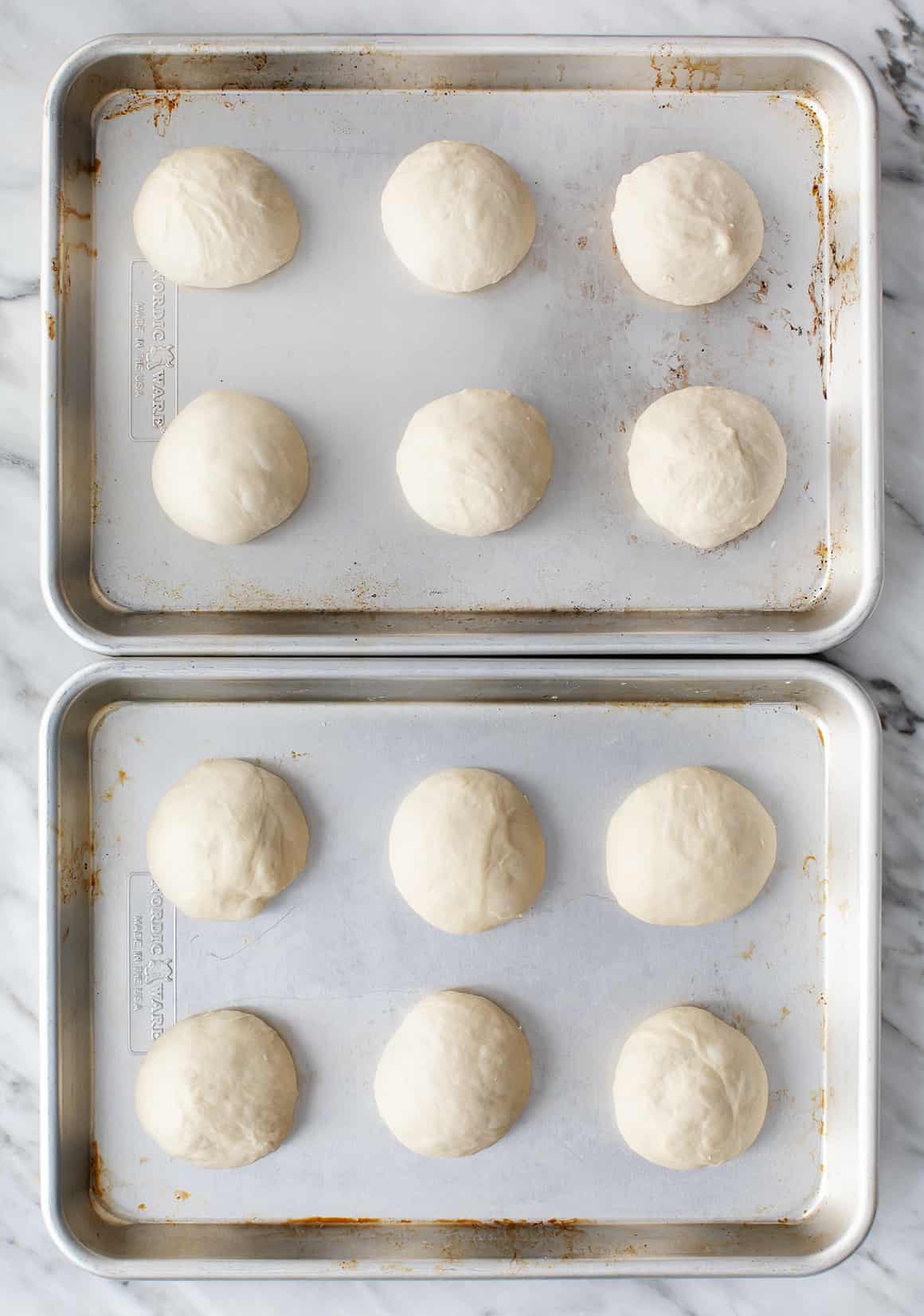 Then, divide the dough into balls. This recipe makes 12 small flatbreads, so you’ll split it up into 12 equal parts. Cover the balls, and let them rise for 20 more minutes. 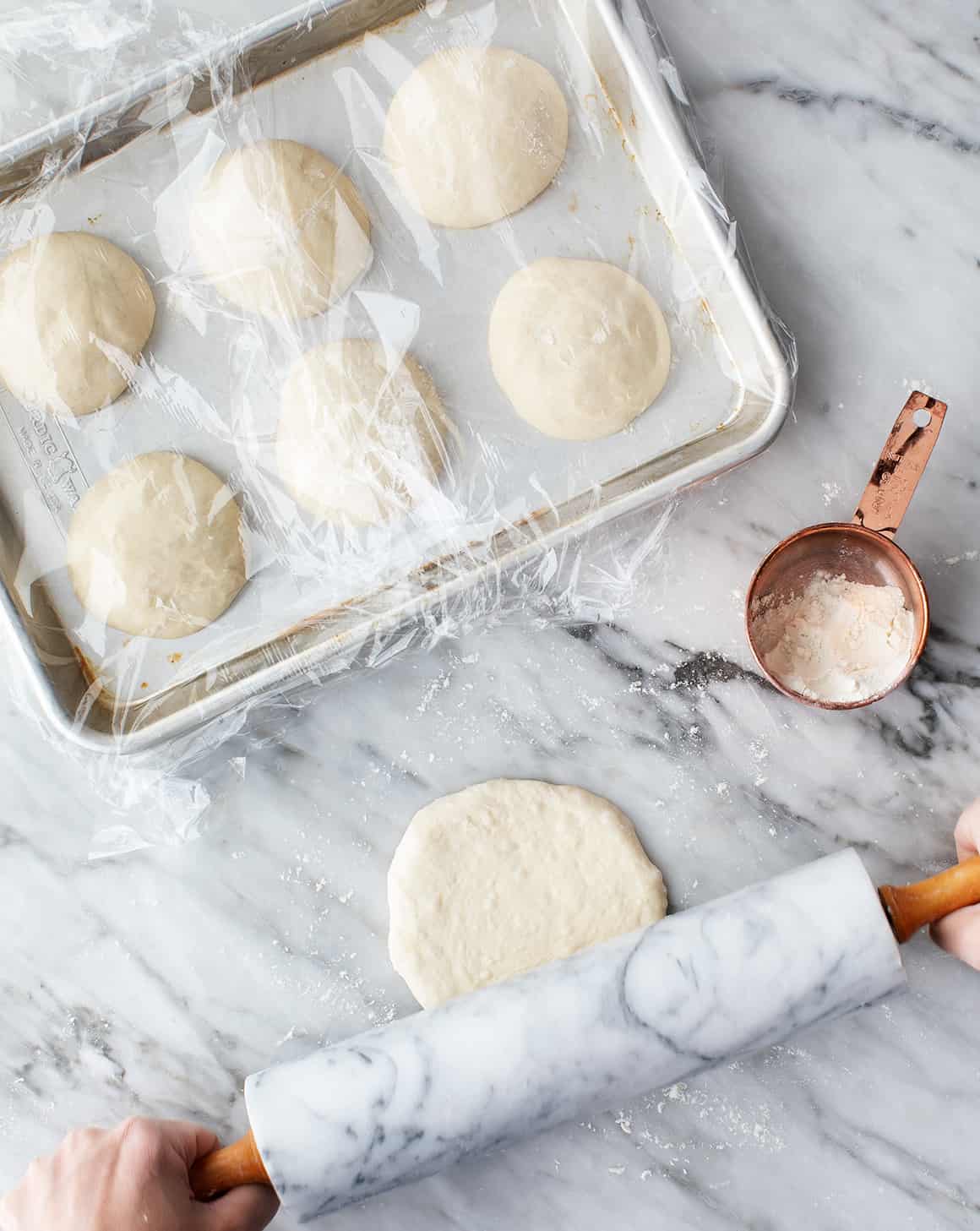 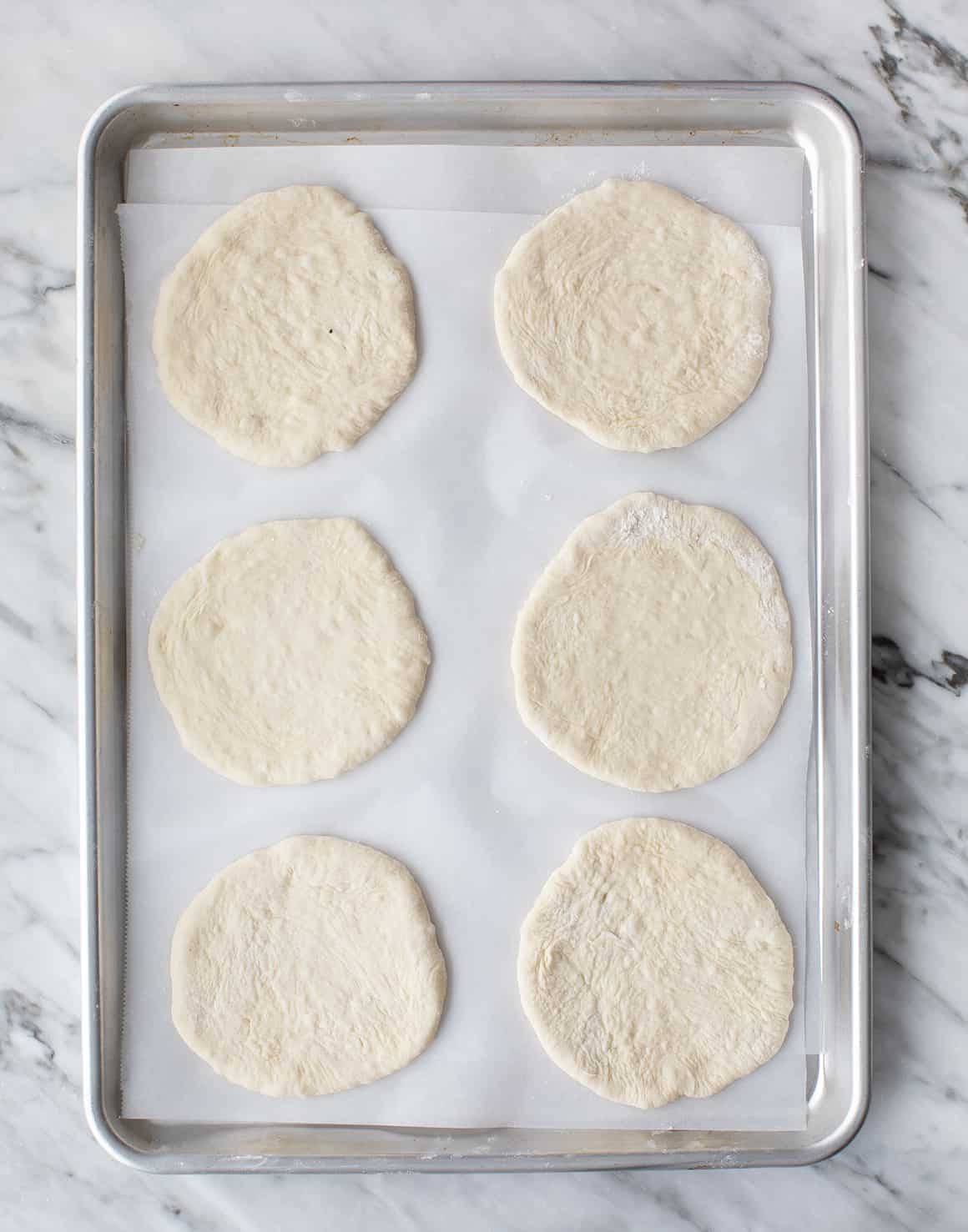 Once you’ve rolled out all the dough, bake! Arrange the dough circles on two parchment-lined baking sheets. Bake one sheet at a time at 500 degrees until the pita bread is puffy and golden brown on top. That’s it! Transfer the freshly baked pita to a wire rack to cool, and enjoy.

Note: When we make this pita bread recipe, there are always a few pita that don’t puff up to form pockets. That’s ok! They’re still great for dipping or enjoying as flatbreads. 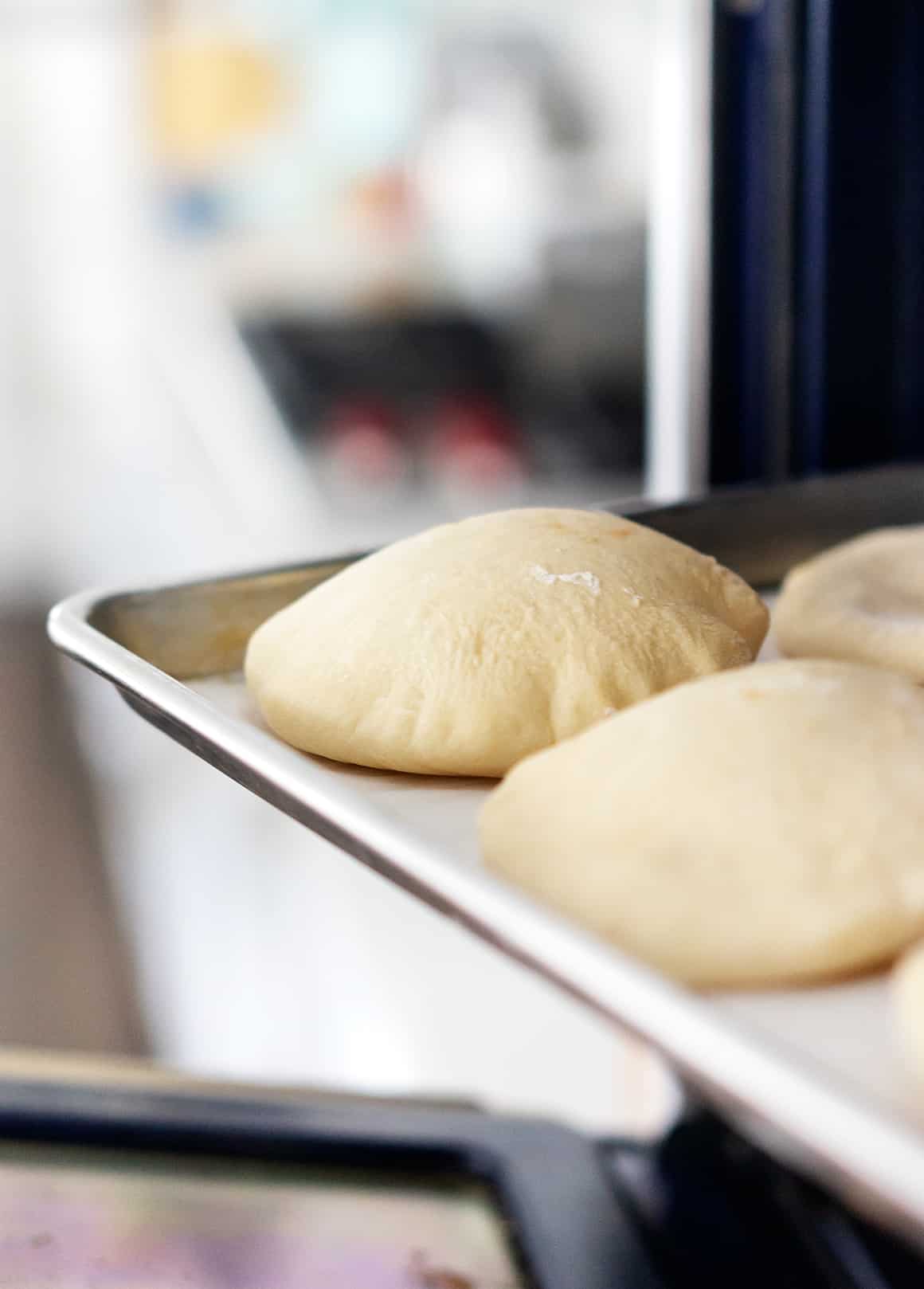 This pita bread is so soft, fluffy, and flavorful that we honestly love to eat it plain! However, it’s also fantastic with all sorts of fillings, spreads, and dips. Here are a few ideas to get you started:

How do you like to eat your homemade pita bread? Let me know in the comments! 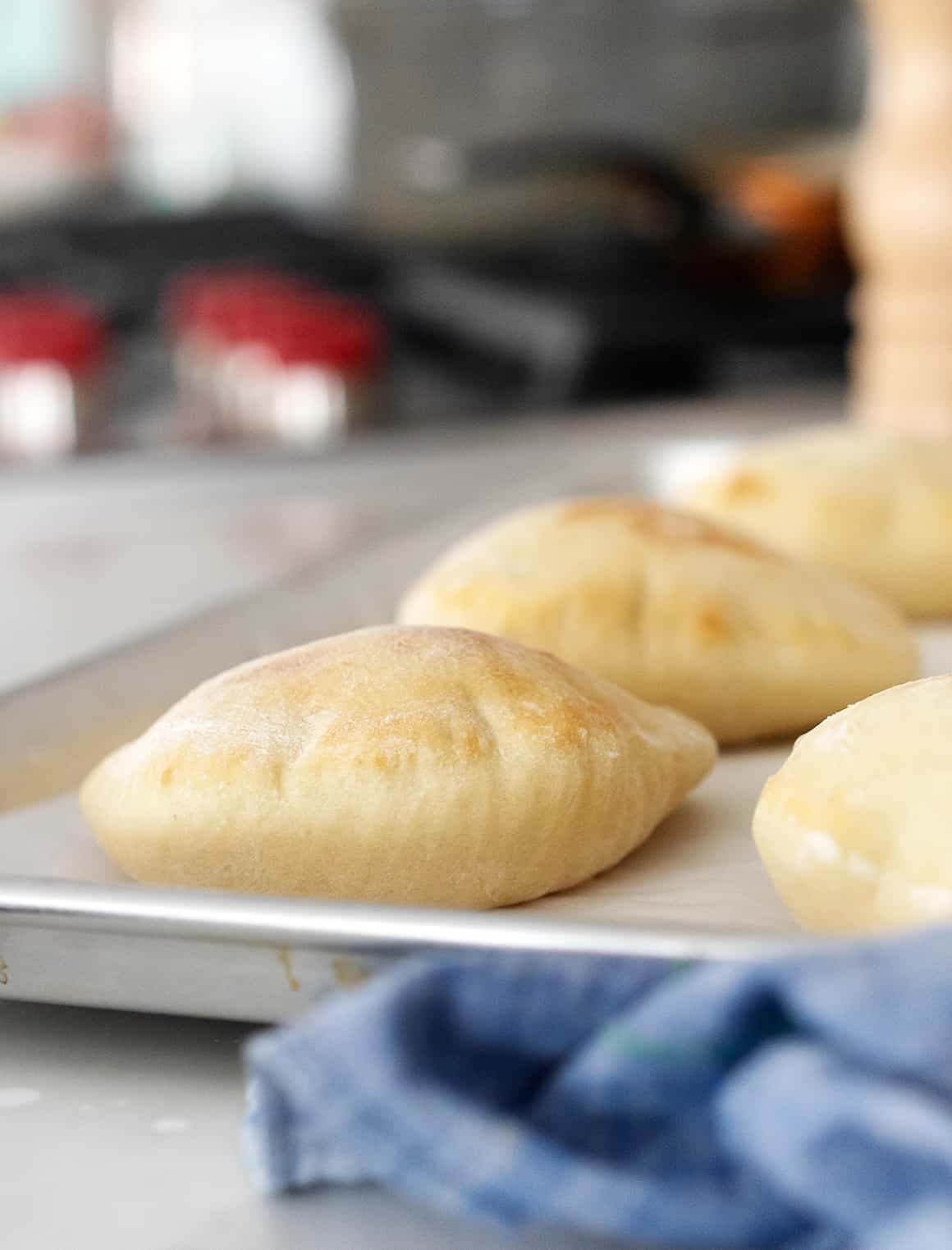 If you love this homemade pita bread recipe, try making one of these recipes next: 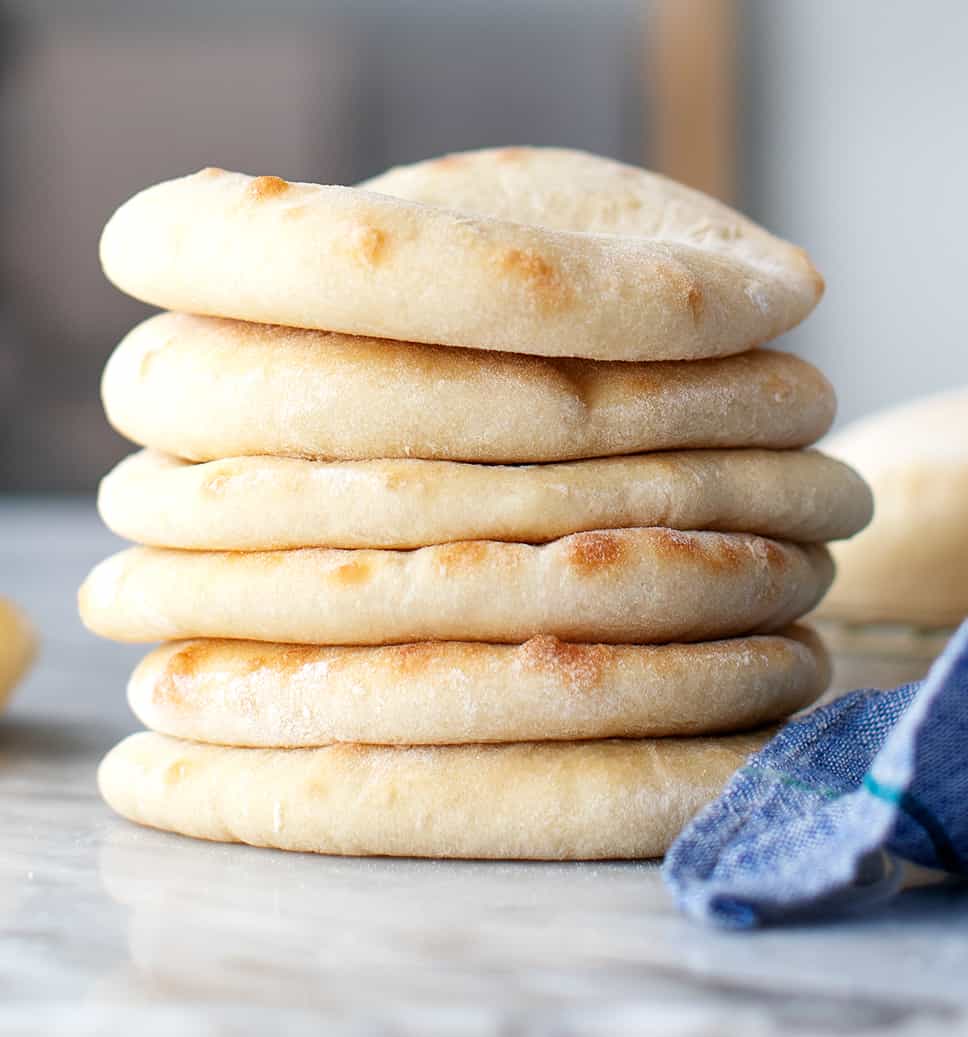 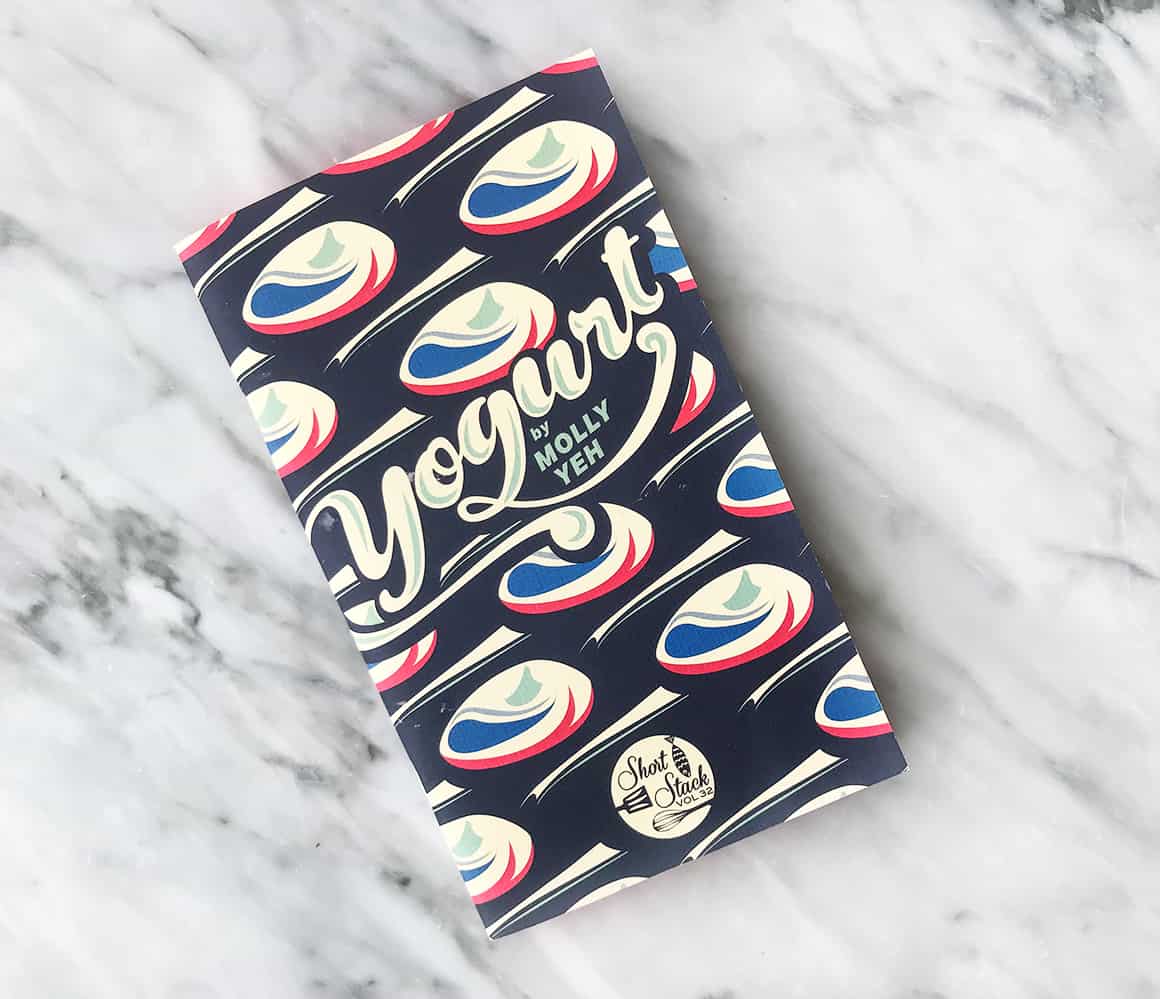 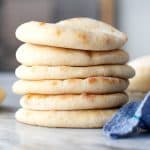 rate this recipe:
5 from 10 votes
Prep Time: 20 mins
Cook Time: 5 mins
Rising Time: 2 hrs 20 mins
Serves 12
Pin Recipe Print Recipe
This homemade pita bread is so much better than store bought! Soft, puffy, and flavorful, it's just as delicious plain as it is with a topping or dip. The recipe is from the Short Stack edition Yogurt by Molly Yeh.

Note: These freeze really well. Molly recommends pulling them out of the oven just before they’re brown if you plan to store and reheat them. To thaw, pop them in the toaster - they’ll brown up a bit as they toast.