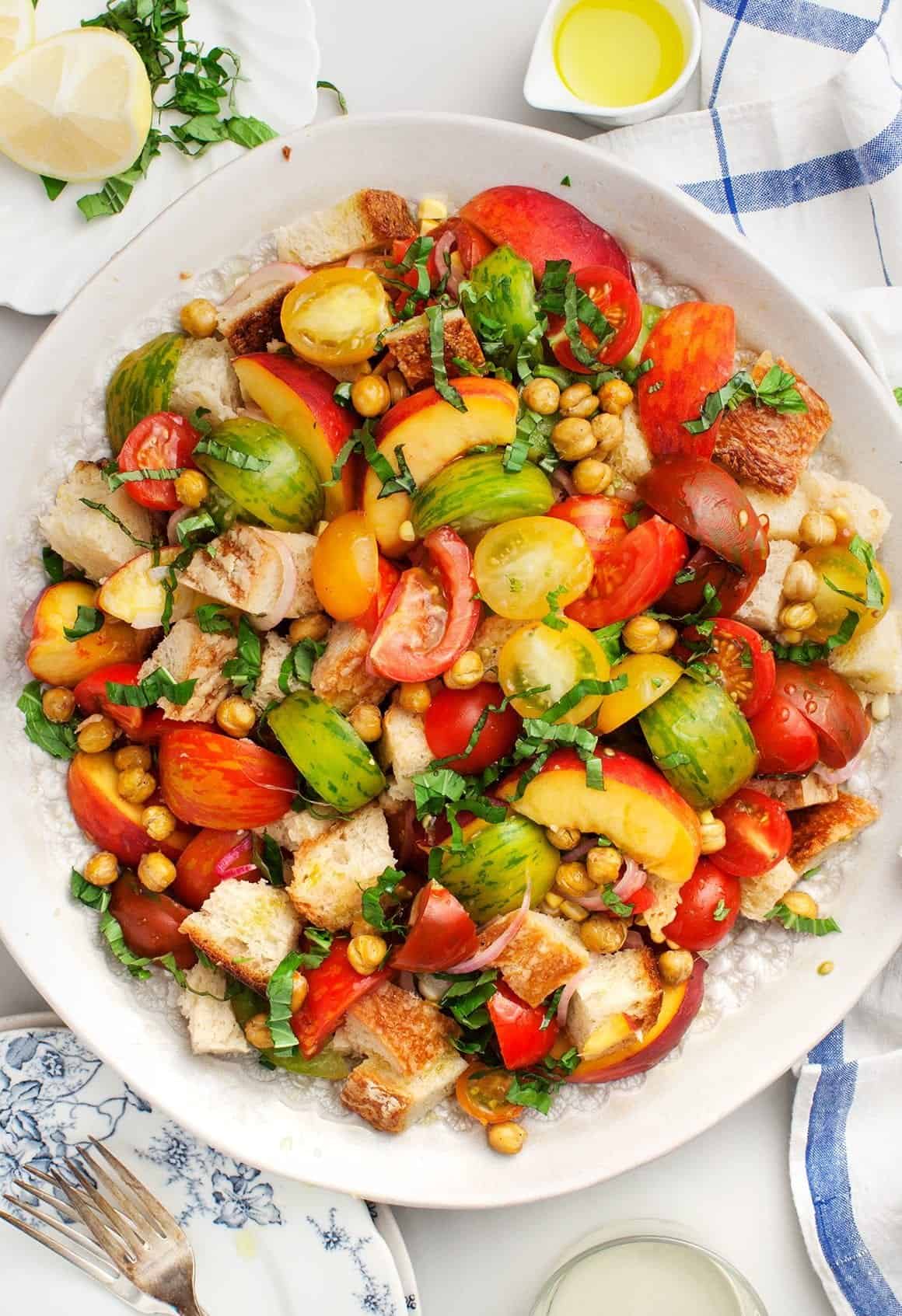 If I had to choose one ingredient that best represents summer, it would have to be the tomato! Everyone loves perfect bright, juicy summer tomatoes, and in my opinion, there’s no better way to celebrate them than with panzanella!

This recipe has been a fan favorite (and one of our favorites) for awhile, so I thought I’d share it again now that all of these ingredients are in peak season. If you look closely, you’ll see that there are more than just tomatoes in this panzanella. I call this one my “everything summer” panzanella because I took the liberty of tossing in a few sweet peaches and some fresh corn, in addition to a plethora of colorful heirloom and cherry tomatoes. It’s basically the salad you want to make for dinner the day you come home from the farmers market with all kinds of good stuff. 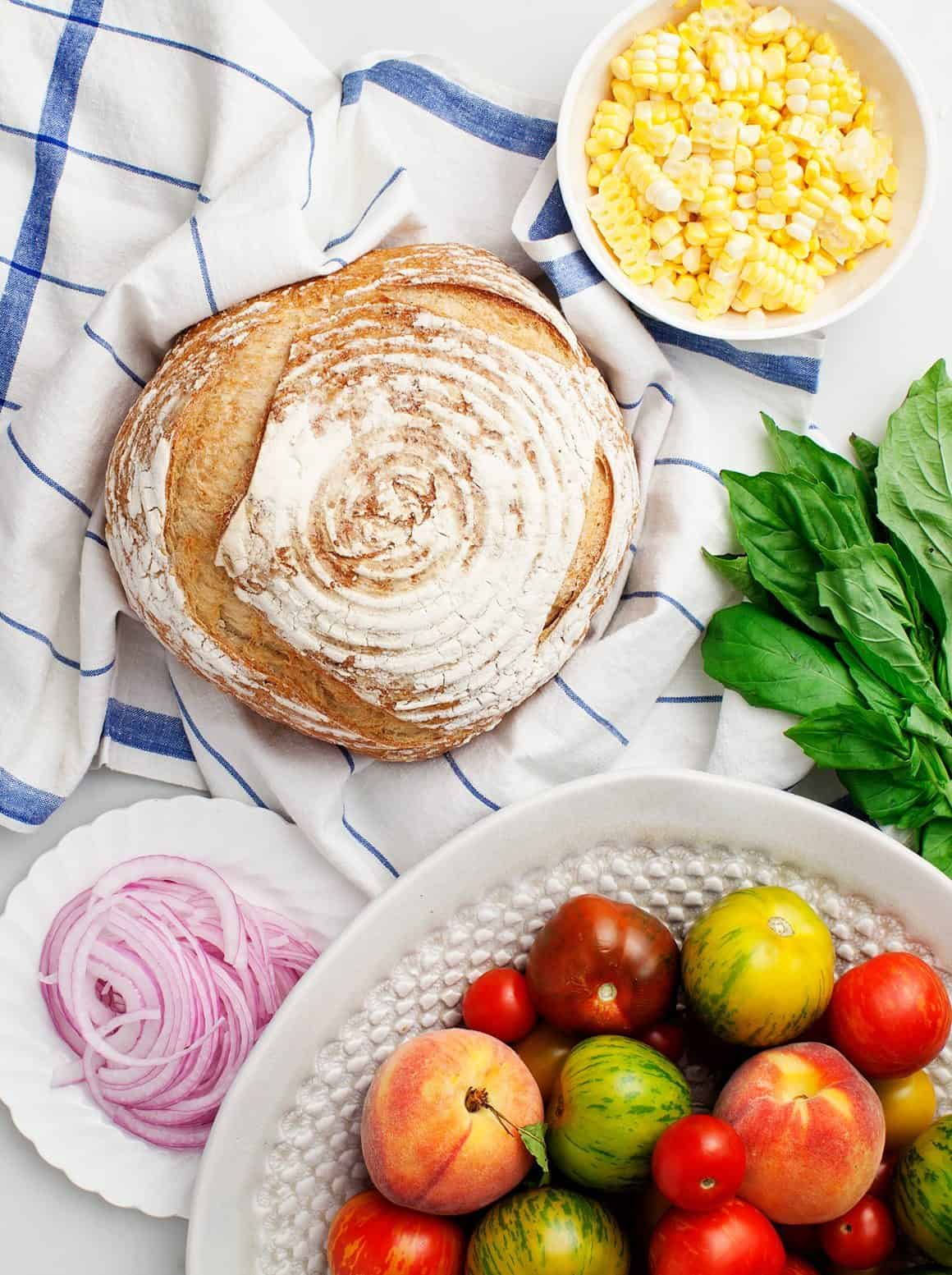 Panzanella is an Italian bread salad. Traditional panzanella features cubes of stale bread, plenty of ripe tomatoes, onion, vinegar, and olive oil. I keep the vinegar, oil, onion, and tomatoes in this variation, but as you can see, my “everything summer” twist is wholly unconventional. With the sweet, juicy peaches, crisp corn, and chewy chickpeas, it’s a delectable showcase for late summer produce. 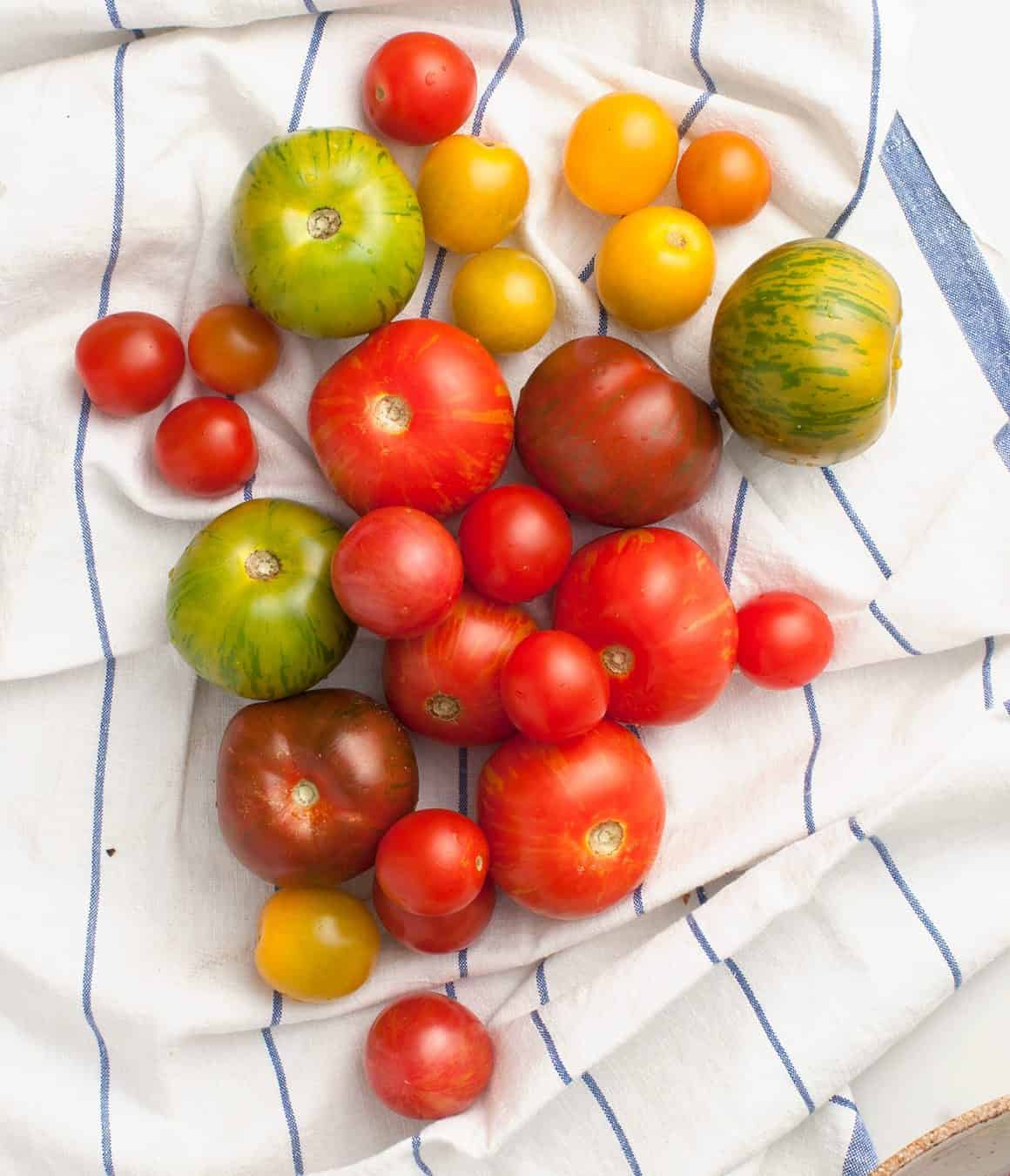 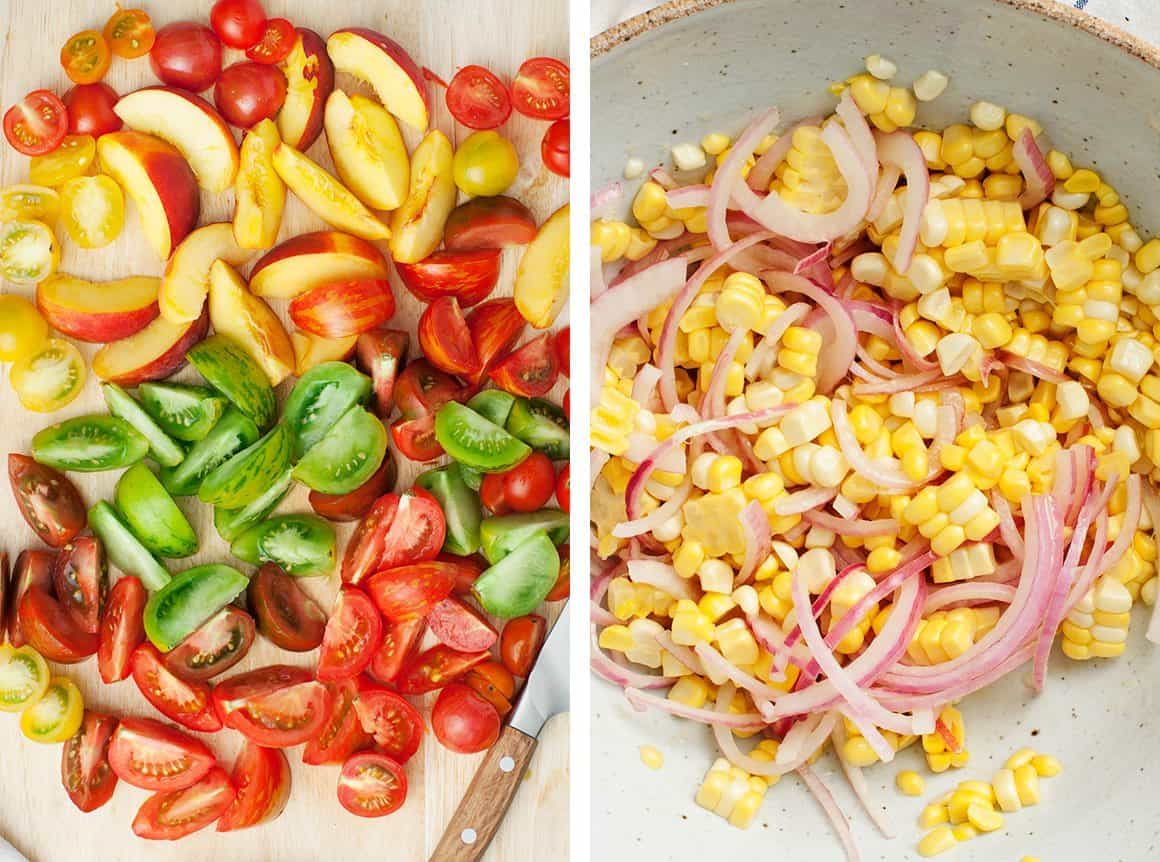 How to Make This Panzanella Salad

First, gather all of the best tomatoes, peaches, corn, and basil that you can find.

Second, find some good bread! I nabbed a gorgeous round of sourdough at my farmers market. You’re ready to cook!

Did I mention that this is a one bowl recipe? The dressing gets stirred at the bottom of a large bowl, before everything else gets added. It couldn’t be easier!

Next, add “everything summer” to the bowl – the tomatoes, peaches, corn, basil & some shaved red onion. Stir to let the peach and tomato juices mingle together.

Fold in some crusty day-old bread. Let it sit for a few minutes so that the bread can soak up some of the juices. Top with roasted chickpeas (optional for a little protein!) and plenty of sliced basil leaves. 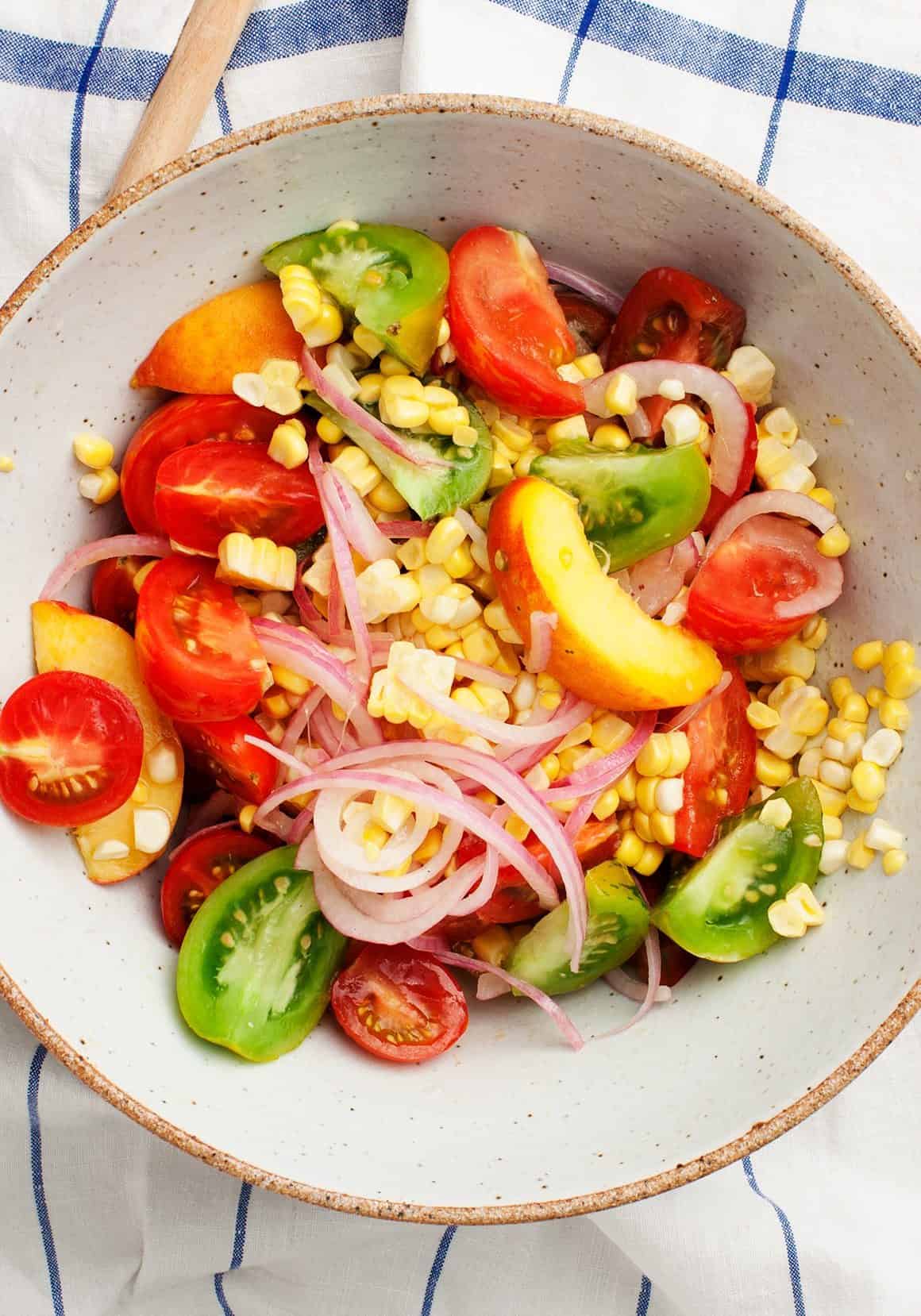 This salad is flexible, so make it to your liking! Here are a few ideas to get you started: 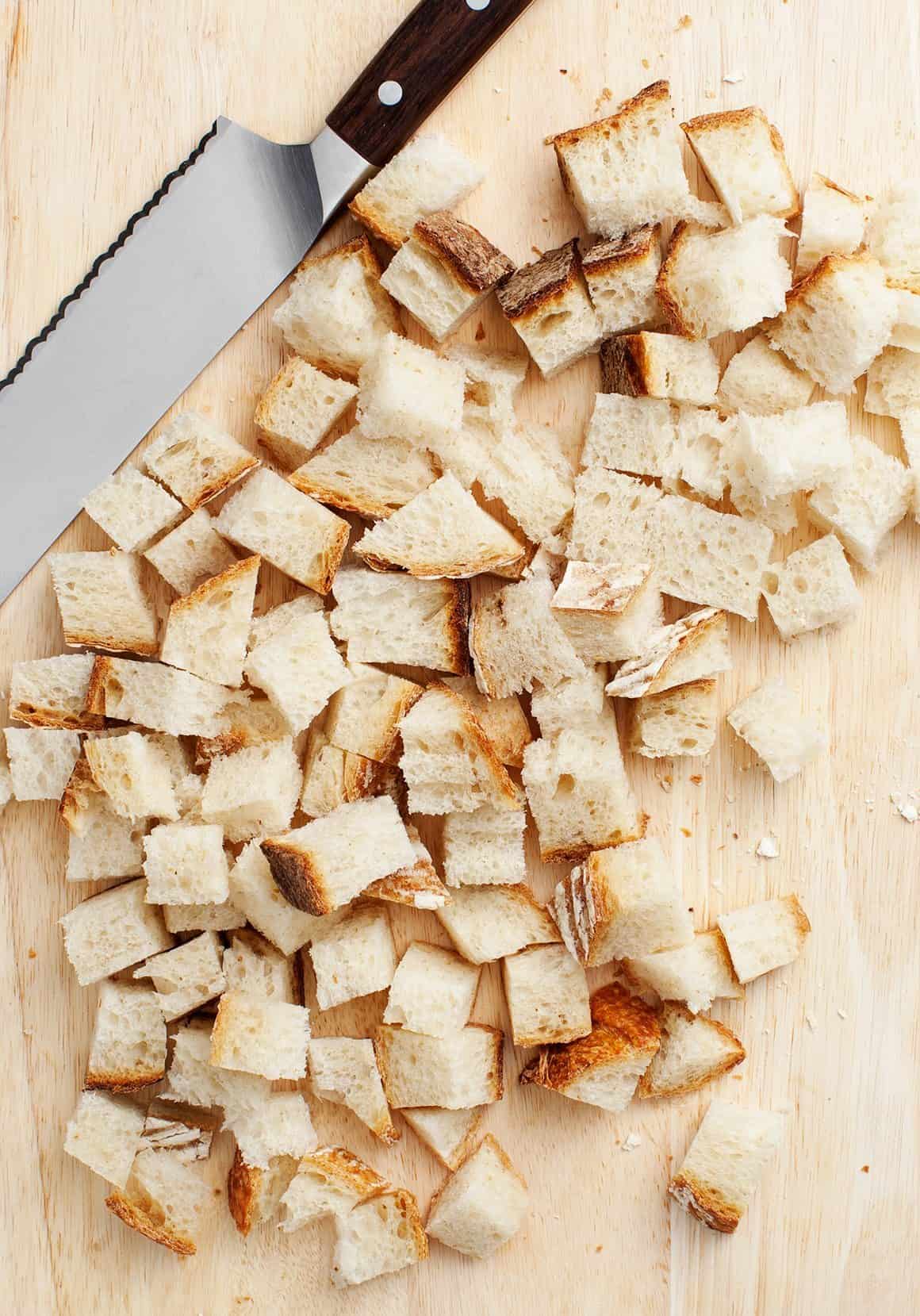 What to Serve with Panzanella Salad

Enjoy the panzanella on its own or serve it as a side dish. It would be excellent with classic summer picnic fare like portobello burgers, black bean burgers, veggie burgers, or BBQ sandwiches. It would also be a good starter for a light summer lasagna or roasted vegetable pasta.

No matter what, pair it with some crisp white wine and savor the last bits of summer! 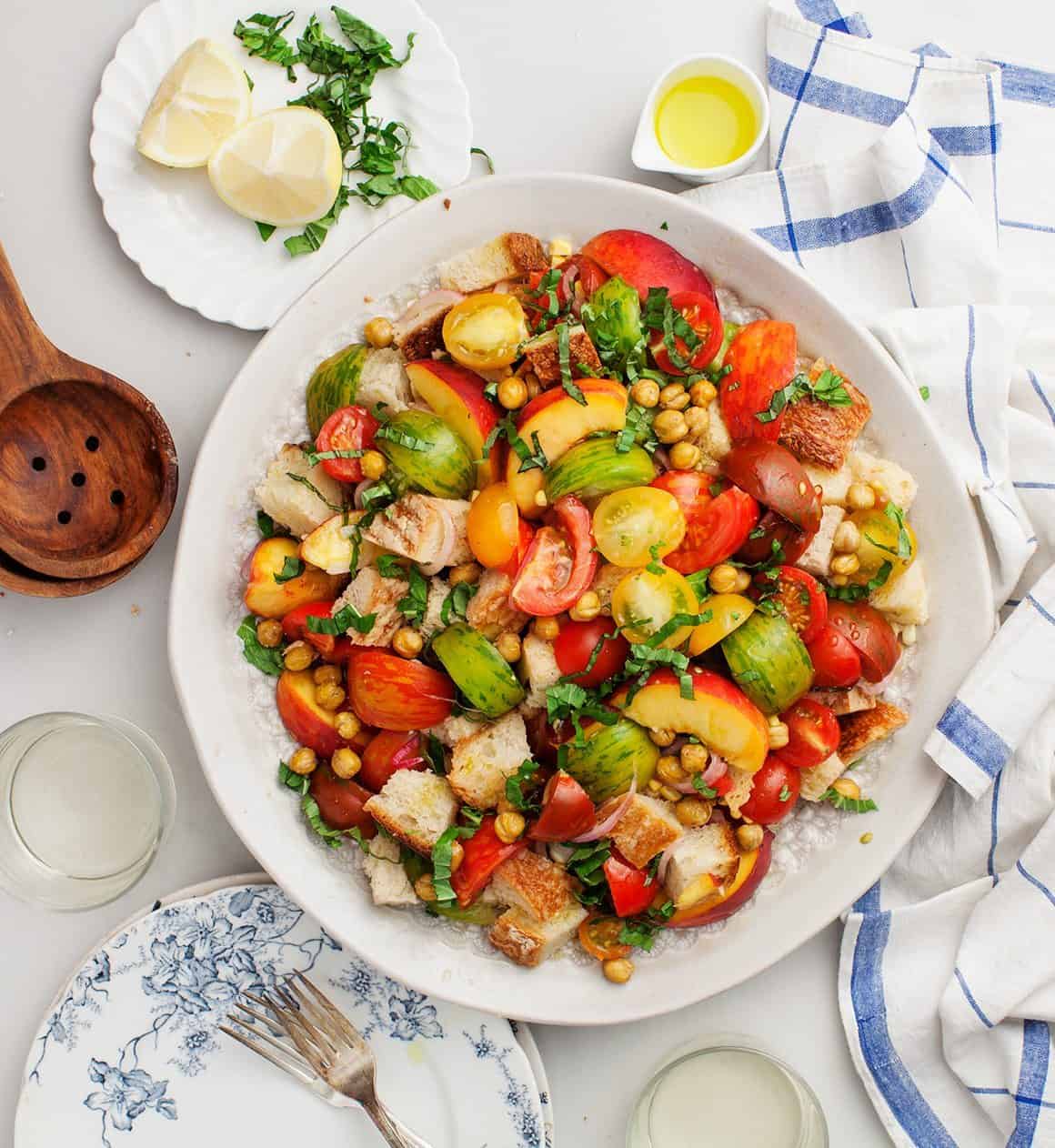 If you love this panzanella salad recipe…

Try my watermelon salad, pasta salad, broccoli salad, potato salad, or any of these summer salads next! 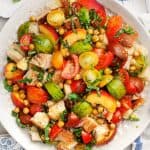 rate this recipe:
5 from 26 votes
Prep Time: 30 mins
Total Time: 30 mins
Serves 4 to 6
Pin Recipe Print Recipe
This summer panzanella is a delicious riff on the classic recipe. I add sweet peaches, crisp corn, and roasted chickpeas to make it a true celebration of summer bounty.