This okonomiyaki recipe proves that weeknight dinners don't have to be boring! It cooks in a flash, and it's healthy, delicious, and super fun to make. 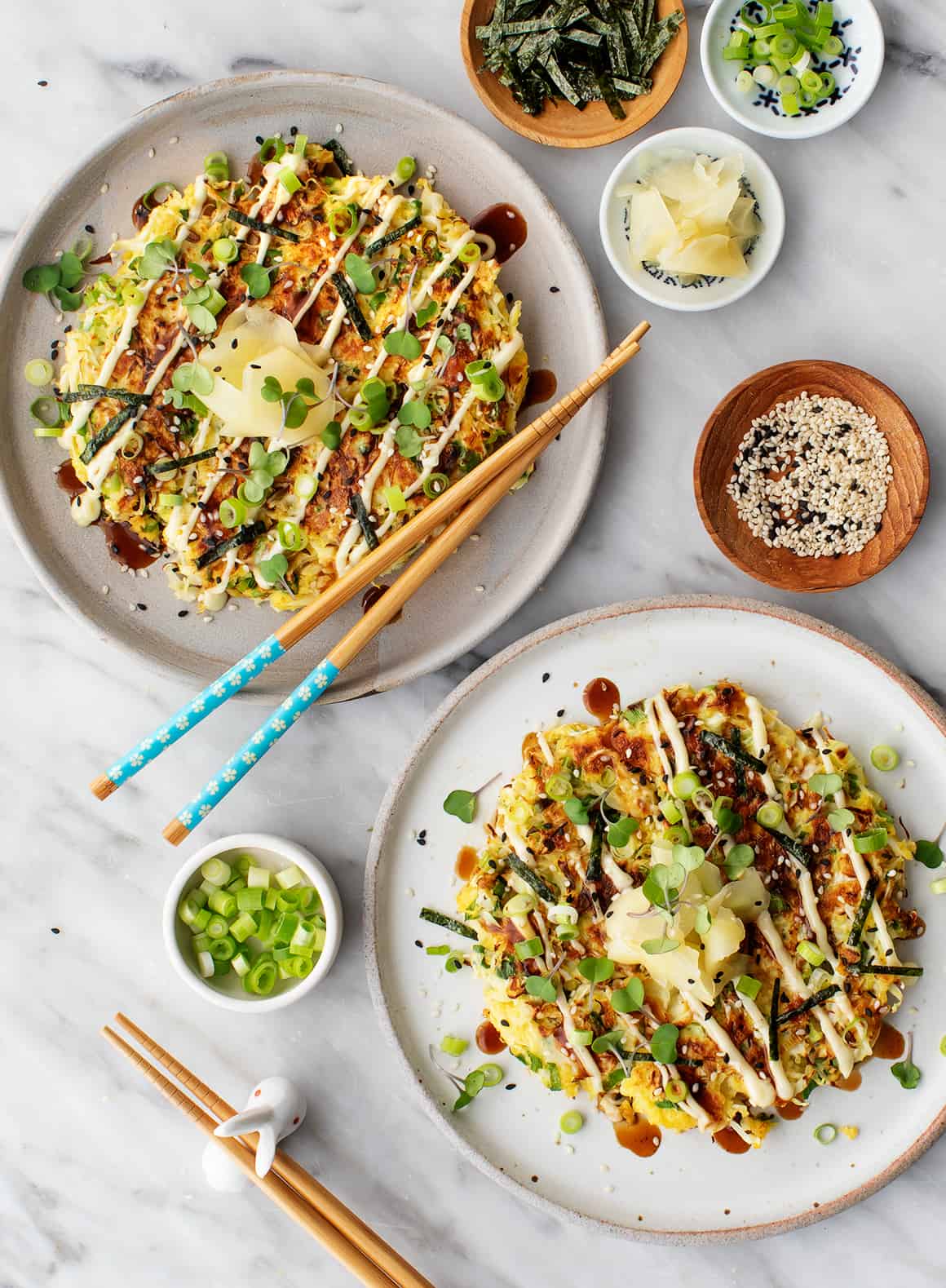 When you think of pantry recipes, okonomiyaki might not be the first thing that comes to mind. It certainly wasn’t for Jack and me. Over the last few weeks, we cooked our way through a whole slew of bean recipes, rice recipes, and pasta recipes before it dawned on us that we had everything we needed to make this popular Japanese street food right in our kitchen!

Jack and I first tried okonomiyaki on a trip to Japan nearly ten years ago, and we’ve loved it ever since. If you’re not familiar with it, it’s sort of a frittata-like Japanese savory pancake made with cabbage, scallions, and assorted meat or seafood (Jack often calls it a cabbage hashbrown). This homemade version isn’t entirely authentic, but it’s healthy, delicious, and so darn easy to make. If you’re looking for a fun cooking project that doesn’t require hours in the kitchen, you have to try this okonomiyaki recipe! 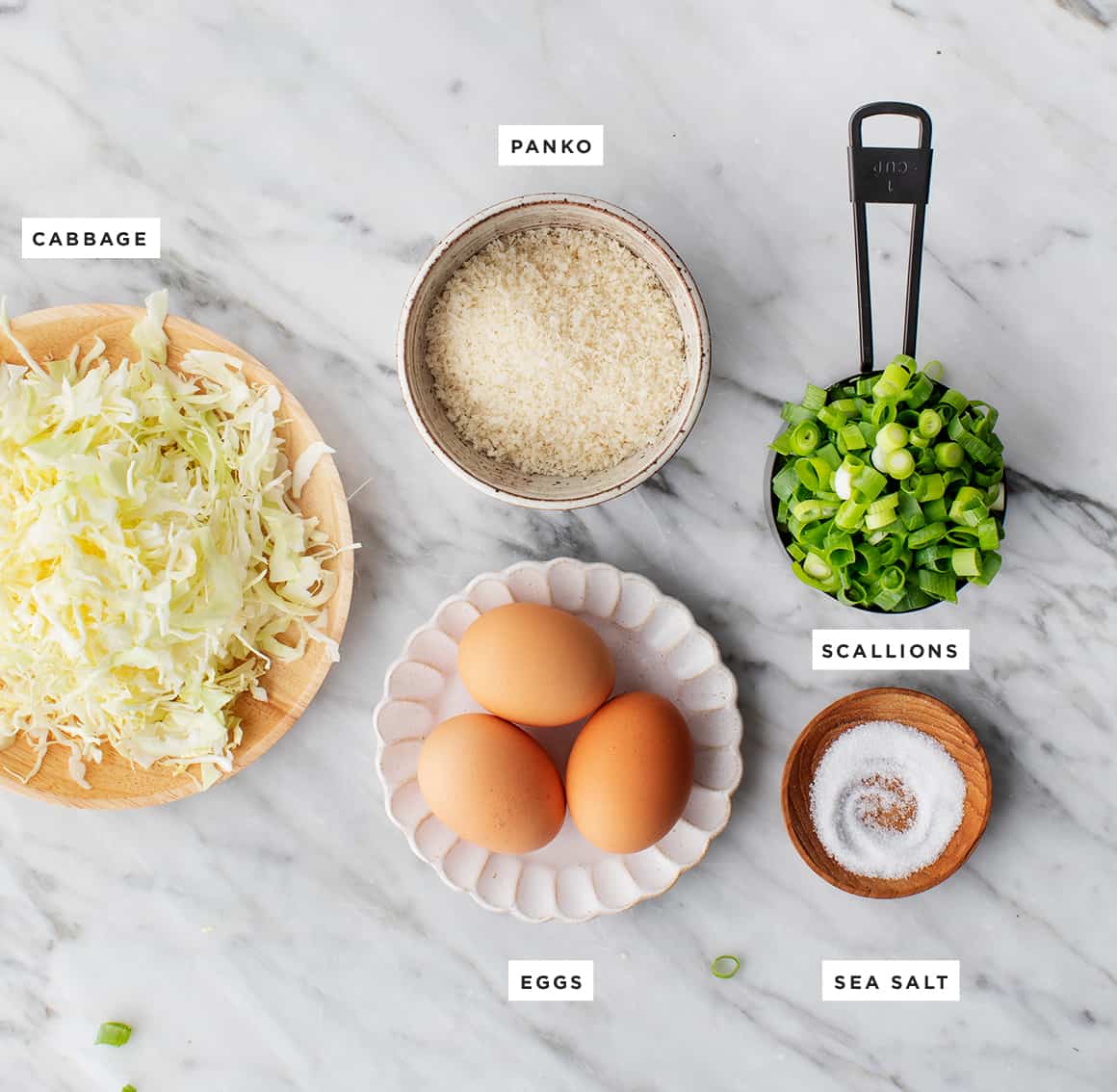 The first time I tried okonomiyaki, Jack and I were in Hiroshima. In Hiroshima-style okonomiyaki, layers of fried vegetables, meat, seafood, noodles, and eggs top a thin flour pancake. It’s delicious, but it’s tricky to replicate on a regular stove at home.

Instead, my recipe is a riff on Osaka or Kansai-style okonomiyaki. In this style, the ingredients are all mixed together. Typically, they include cabbage, green onion, and some combination of meat and seafood like pork belly, octopus, squid, or shrimp. Of course, my recipe is vegetarian, so you won’t find any meat or seafood here. 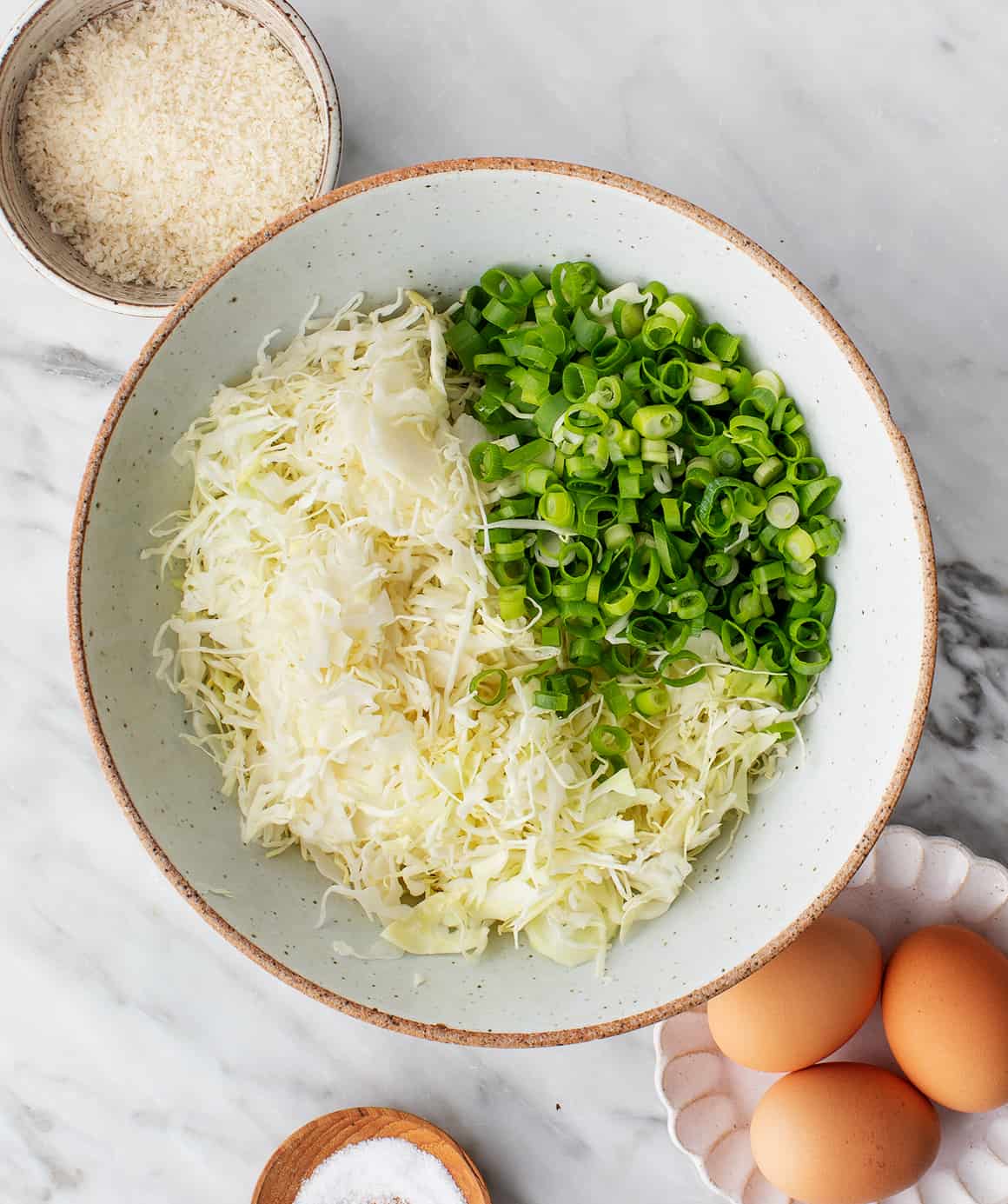 Instead, I mix together lots of shaved cabbage, scallions, and panko breadcrumbs. Then, I tie it all together with a few beaten eggs. It’s super easy and super tasty too. 🙂 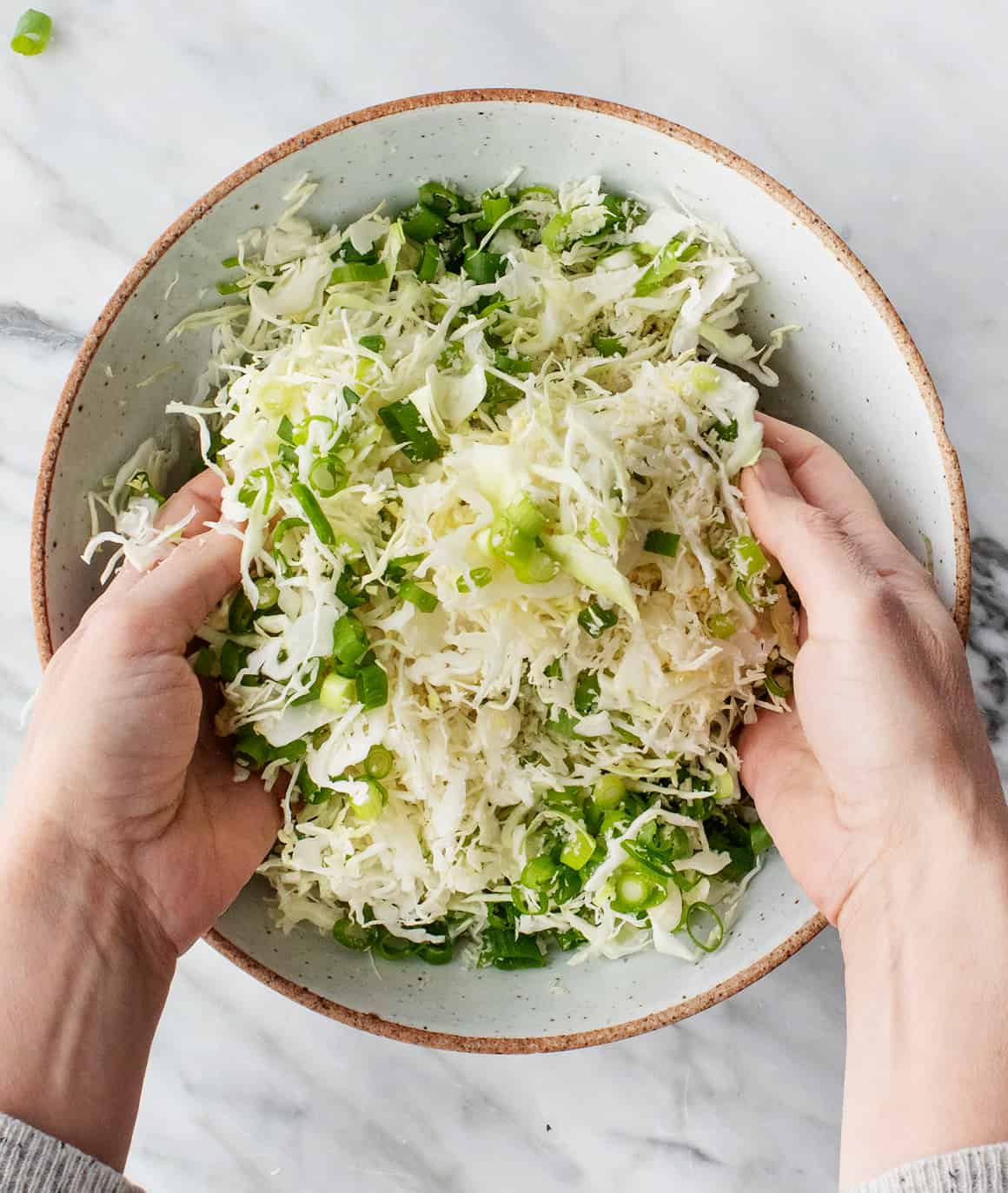 Once you’ve cooked your okonomiyaki, it’s time for the fun part: the toppings! In Japan, it’s traditionally topped with okonomiyaki sauce, drizzles of Kewpie mayo, dried seaweed flakes, and bonito flakes. At home, I like to use these ingredients:

Use all of these toppings, or just choose a few. Then, dig in, and enjoy! 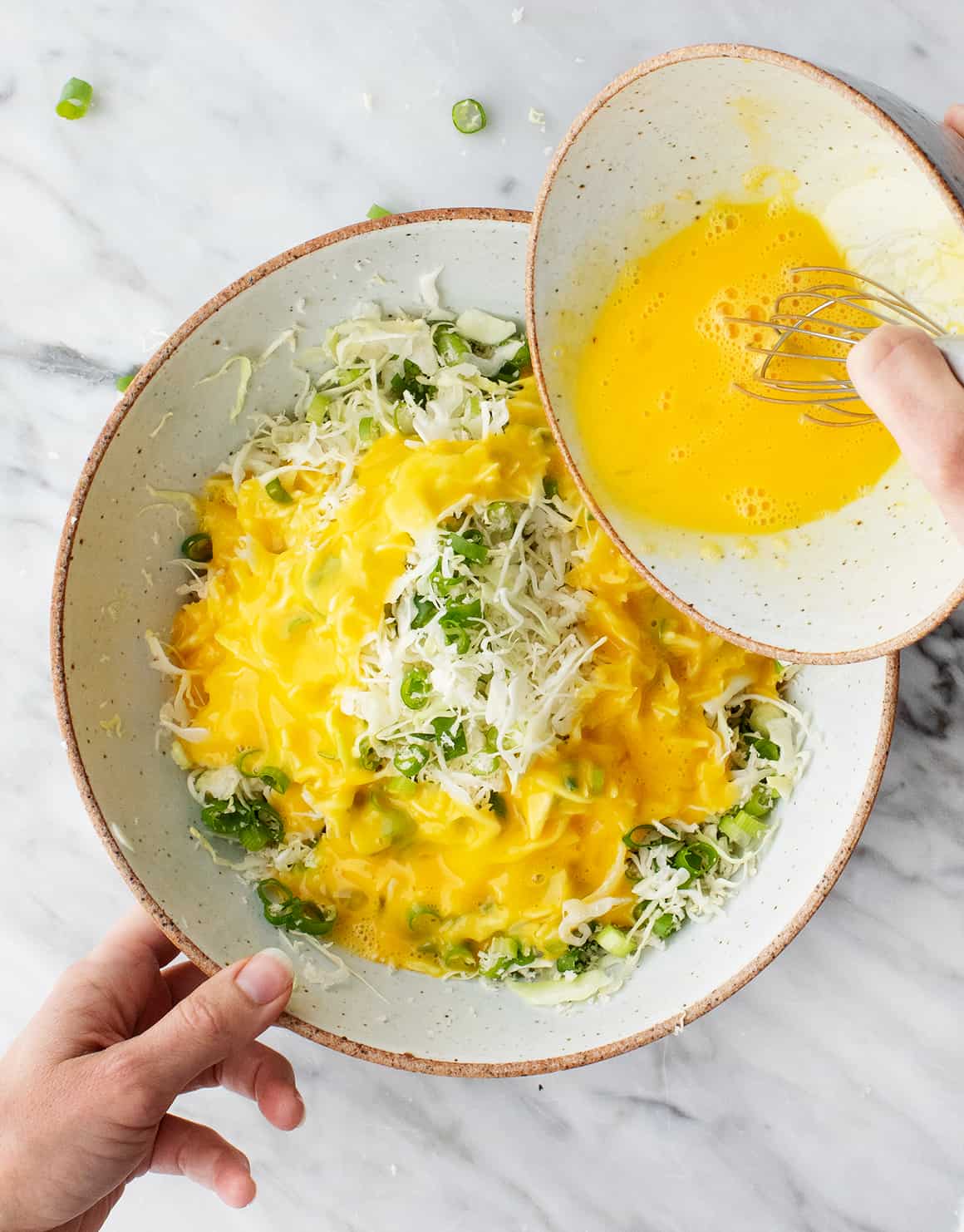 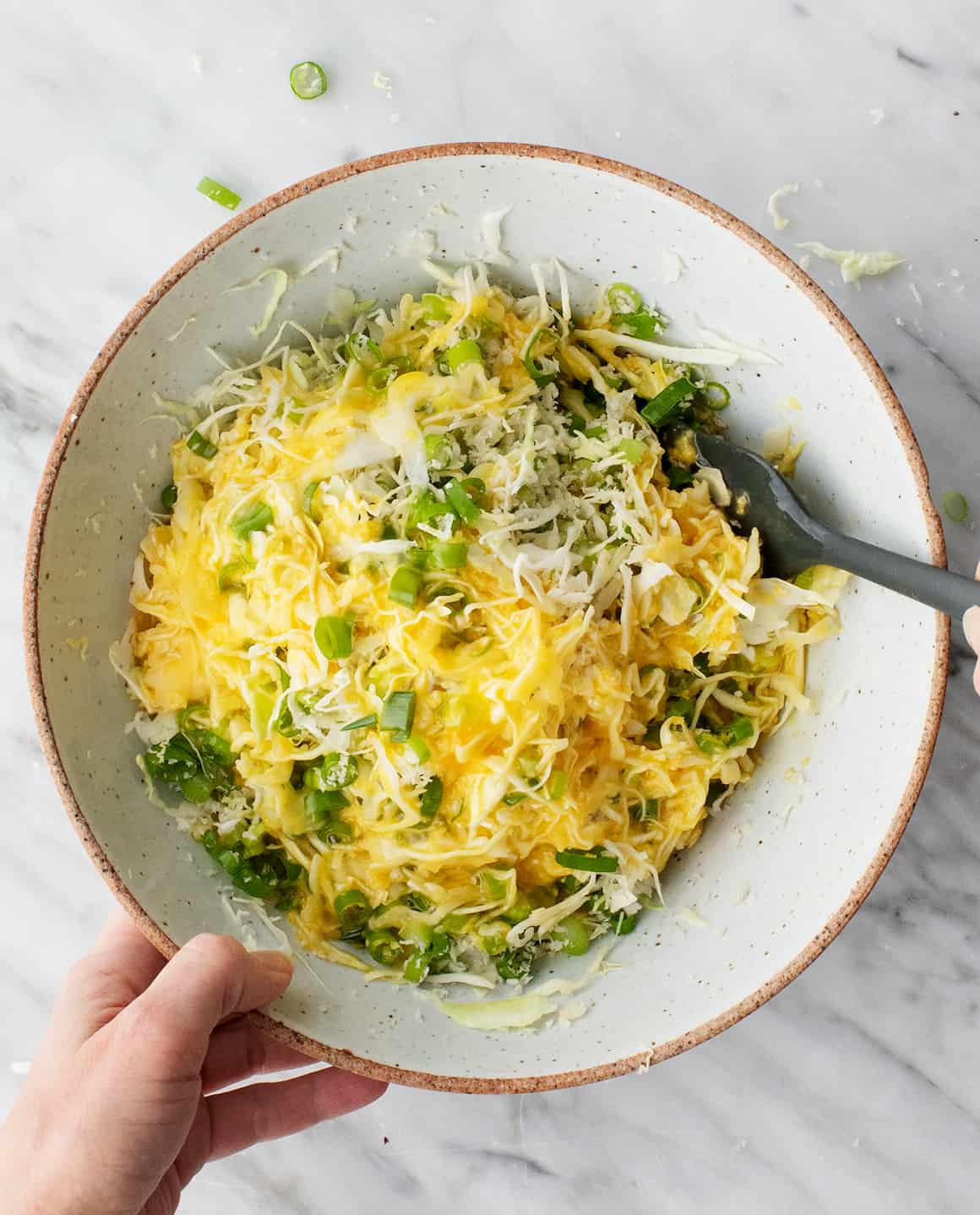 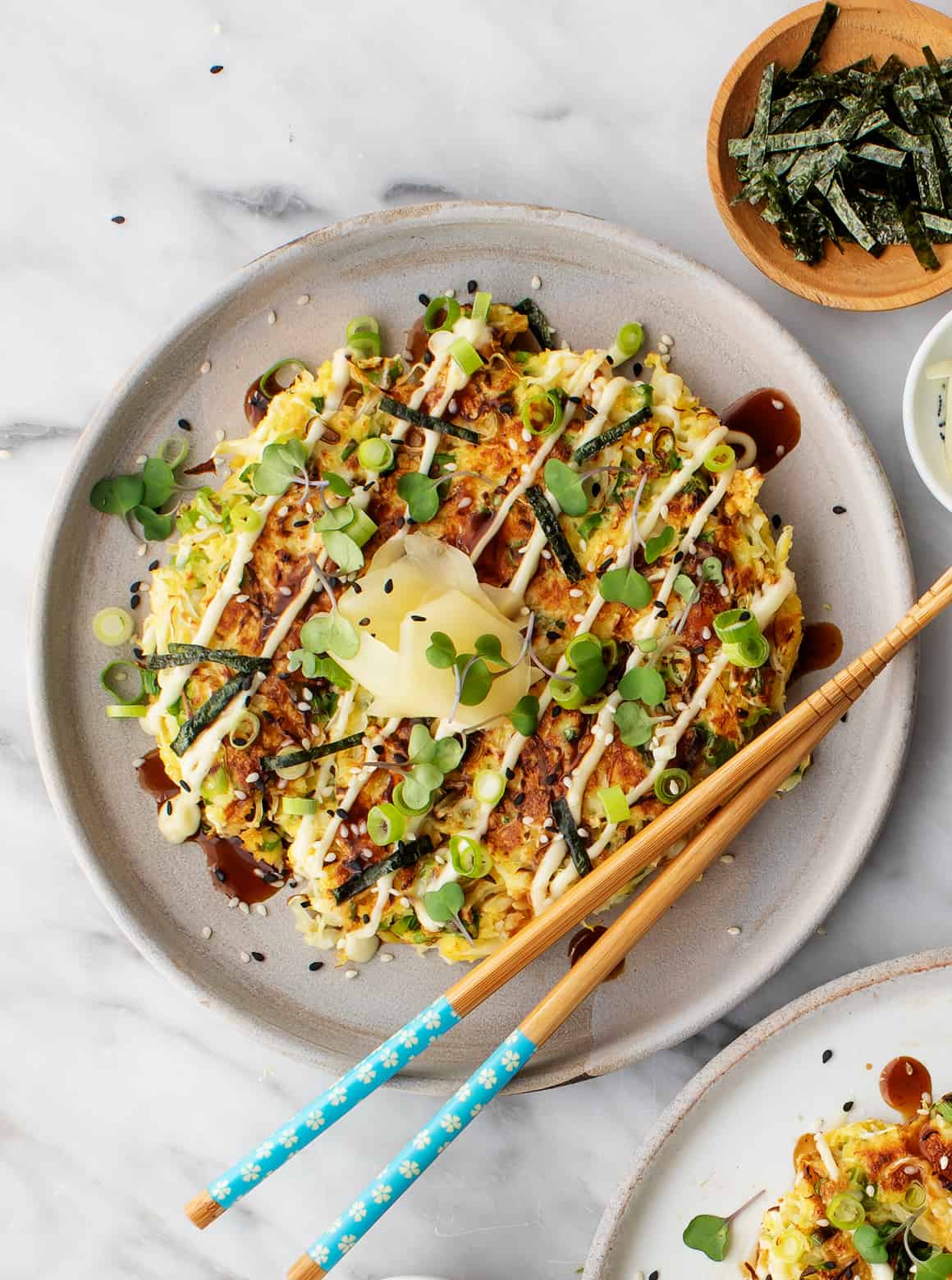 If you love this okonomiyaki recipe, try one of these Japanese-inspired recipes next: 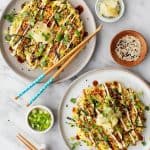 *I like to shred my cabbage on a mandoline to get thin, even-sized shreds.
**Use scissors to cut nori into thin strips.
Did you make the recipe? I want to see!
Tag @loveandlemons on Instagram.
✕
Free Bonus:
5-Part Guide to Delicious Vegetarian Eating!