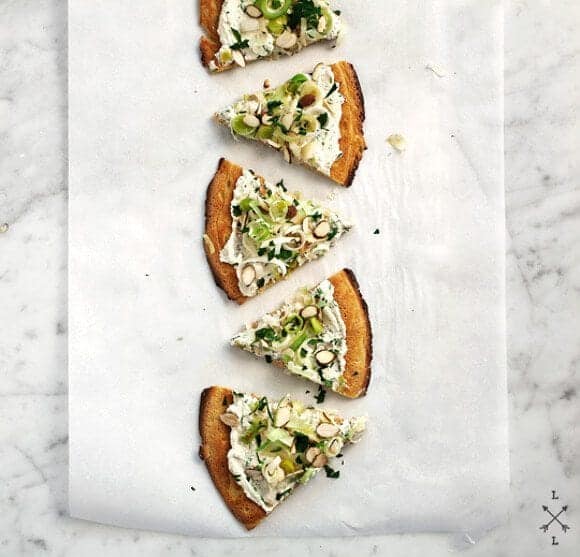 This is so not my week. I’m going to keep this very short because I badly injured my thumb last night, and you don’t want to know how long it just took me to type out the recipe at the end of this post…

Jack and I made this last Saturday night for dinner. I got the inspiration from this photo of a leek tart that I pinned. Leeks aside, my recipe is entirely different. I decided to try socca (a chickpea flour pancake/dough) as a healthier alternative to puff pastry… not that it’s equivalent to a flaky puff pastry, it’s just something I’ve been wanting to try.

I wanted to create a sort of herb-cream cheese spread, but without cheese, so I made a dill and chive spread using almonds as the base. It was so good that we couldn’t stop eating it by the spoonful as we were making the rest of components of the meal. This spread could be used in so many different ways, as a dip for pita chips and raw veggies, or thinned out and tossed with greens as a creamy salad dressing.

Socca is one of those things that I think you have to try at least twice to get just right. I was pleasantly surprised at how easy and delicious this was, being my first go at it. The only thing I’ll do differently next time is to put less batter in my pan (or use a larger pan) for a slightly thinner, less dense, crust. (It looks thin here but chickpea flour is surprisingly filling).

I topped this “tart” with sautéed leeks and, for crunch, some toasted almonds. We popped open a bottle of red wine and had a lovely casual evening out on the patio. 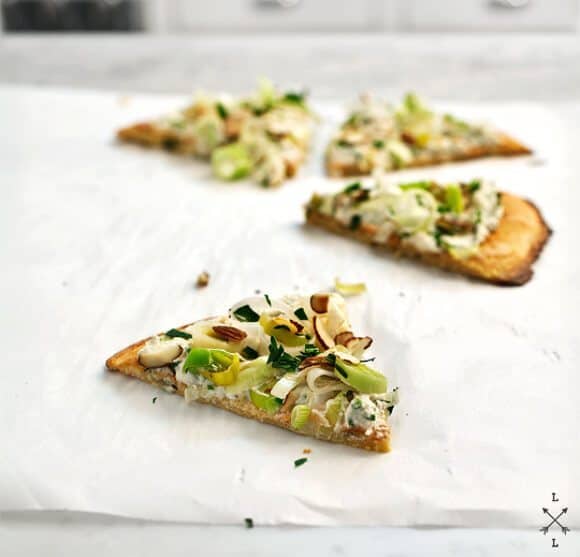 On another note, if anyone has a recommendation for splitting up fighting dogs without getting your hands in the middle, I’d appreciate suggestions… Our “kids” haven’t been getting along lately, to say the least…

Print
Author: Jeanine Donofrio
Serves: 4 as an appetizer, 2 as a main course
Ingredients
For the socca:
For the almond-herb spread:
For topping:
Instructions
Notes
*To blanch the almonds, drop in boiling water for about 30 seconds, remove and transfer to a bowl of water filled with ice. Skins should slide right off. This might be just as tasty with the skins left on, but I was going for a white, not brown, color. Alternatively, you can soak your almonds overnight, but I didn't think of that far enough in advance.
**I made this in a 10-inch skillet (I don’t have a 12-inch cast-iron skillet as the recipe calls for, but I really need to get one). Next time I would either make this same recipe in a larger skillet, or pour in one-half to two-thirds the amount of batter.
3.4.3177
Did you make the recipe? I want to see!
Tag @loveandlemons on Instagram.
✕
Free Bonus:
5-Part Guide to Delicious Vegetarian Eating!