This cinnamon french toast bake is perfect for a holiday brunch! Made with challah, almond milk, and a brown sugar topping, it’s decadant & delicious. 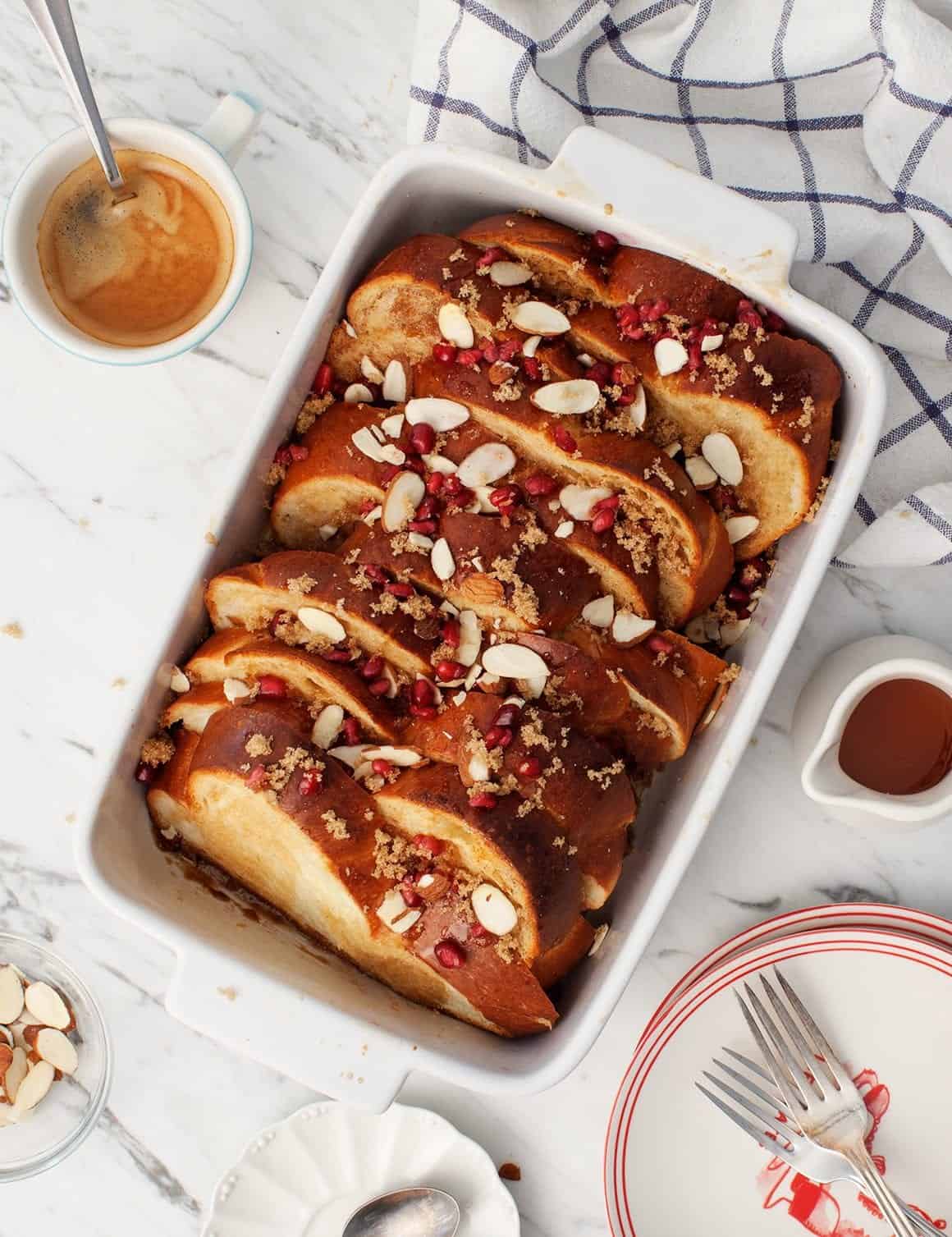 Tell me, what’s your breakfast weakness? Pancakes? Waffles? Mine is French toast. Eggy bread that’s soft in the middle and crisp around the edges with a good dash of cinnamon throughout… what’s not to love? Well, it can often be quite an indulgent sugar bomb, which is why I like to make it at home where I can use ingredients that are a bit lighter. I usually make French toast on the stovetop for just myself and Jack, but today I’m sharing this baked version that would be so delicious for Christmas morning or a holiday brunch where you’re cooking for more than 2 (though Jack had no problem finishing this off…). 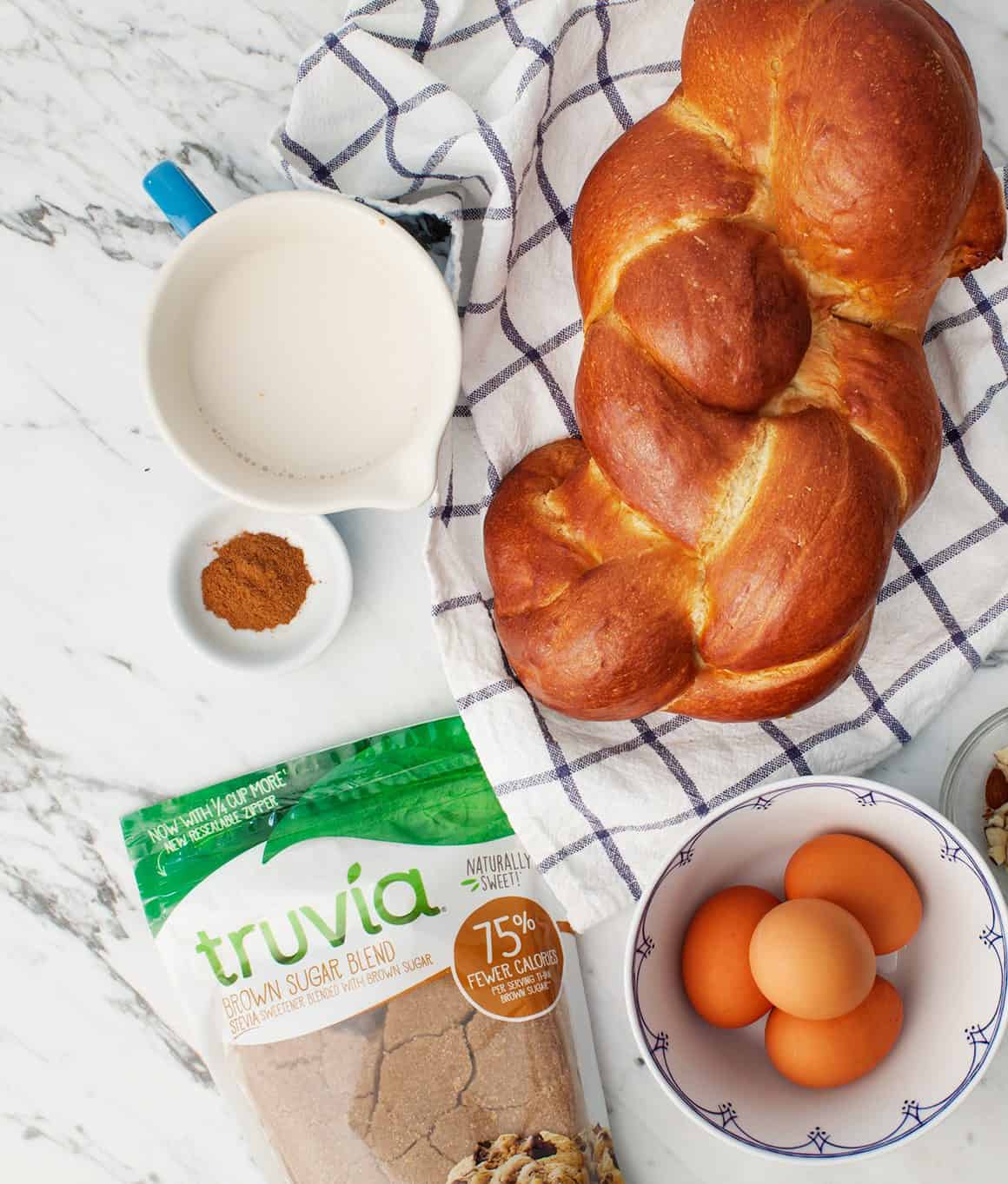 This French toast is lighter than most – I swapped out heavy cream for almond milk, and instead of regular sugar I used Truvia Brown Sugar Blend. I get SO MANY requests for lower sugar recipes with stevia-based sweeteners. That’s why I’m happy to share this recipe in partnership with Truvia.

The best thing about the brown sugar blend is that the texture is the exact same as regular brown sugar. I mixed it with cinnamon and sprinkled it all over this dish before I baked it. It caramelized on top in the oven giving the top of the bread a delightful crisp edge. 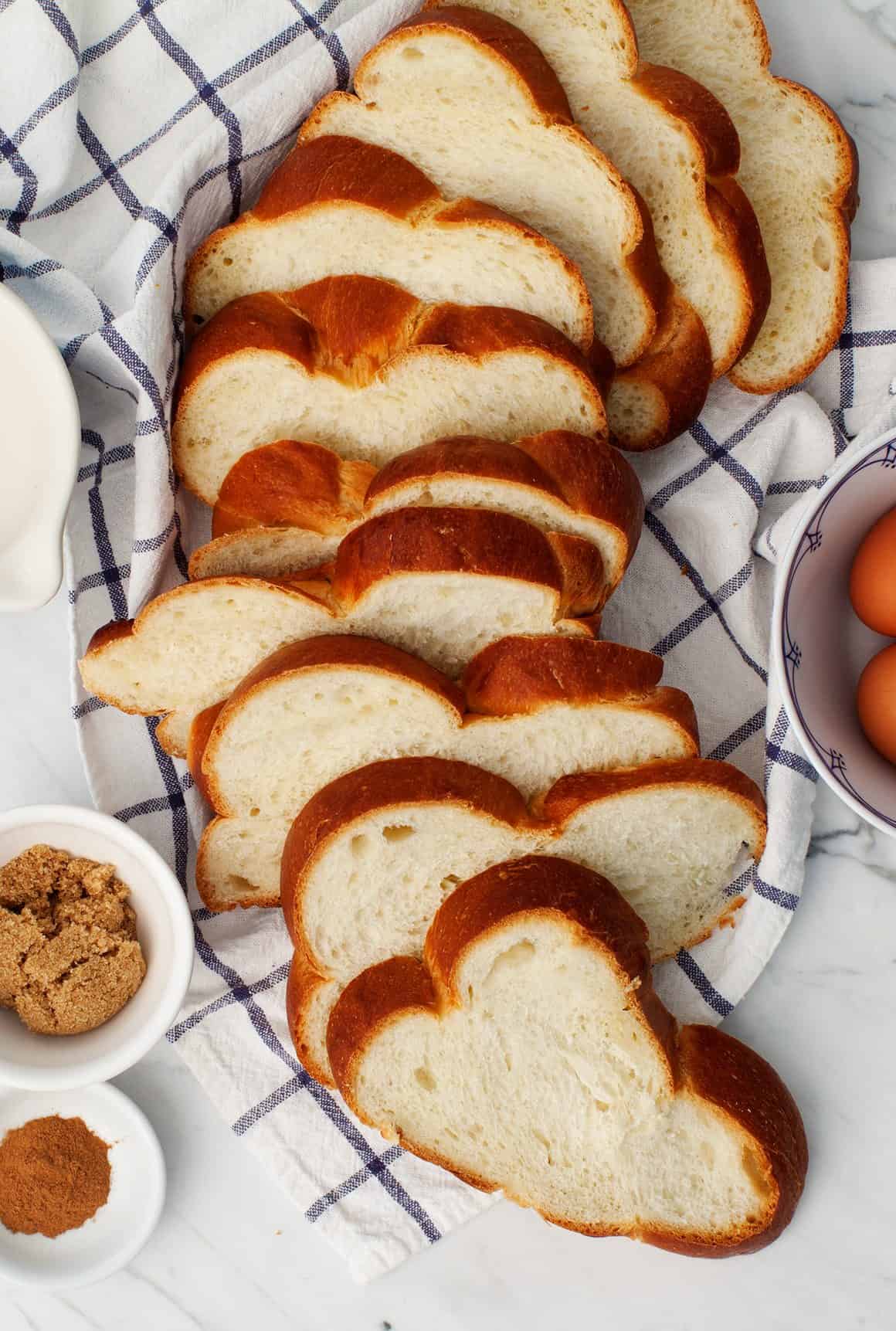 How to Make This French Toast Bake

This recipe is super easy to make. Start with challah bread that’s a few days old and slice it pretty thick. Dip it in the egg/almond milk mixture, and load it into the baking dish. 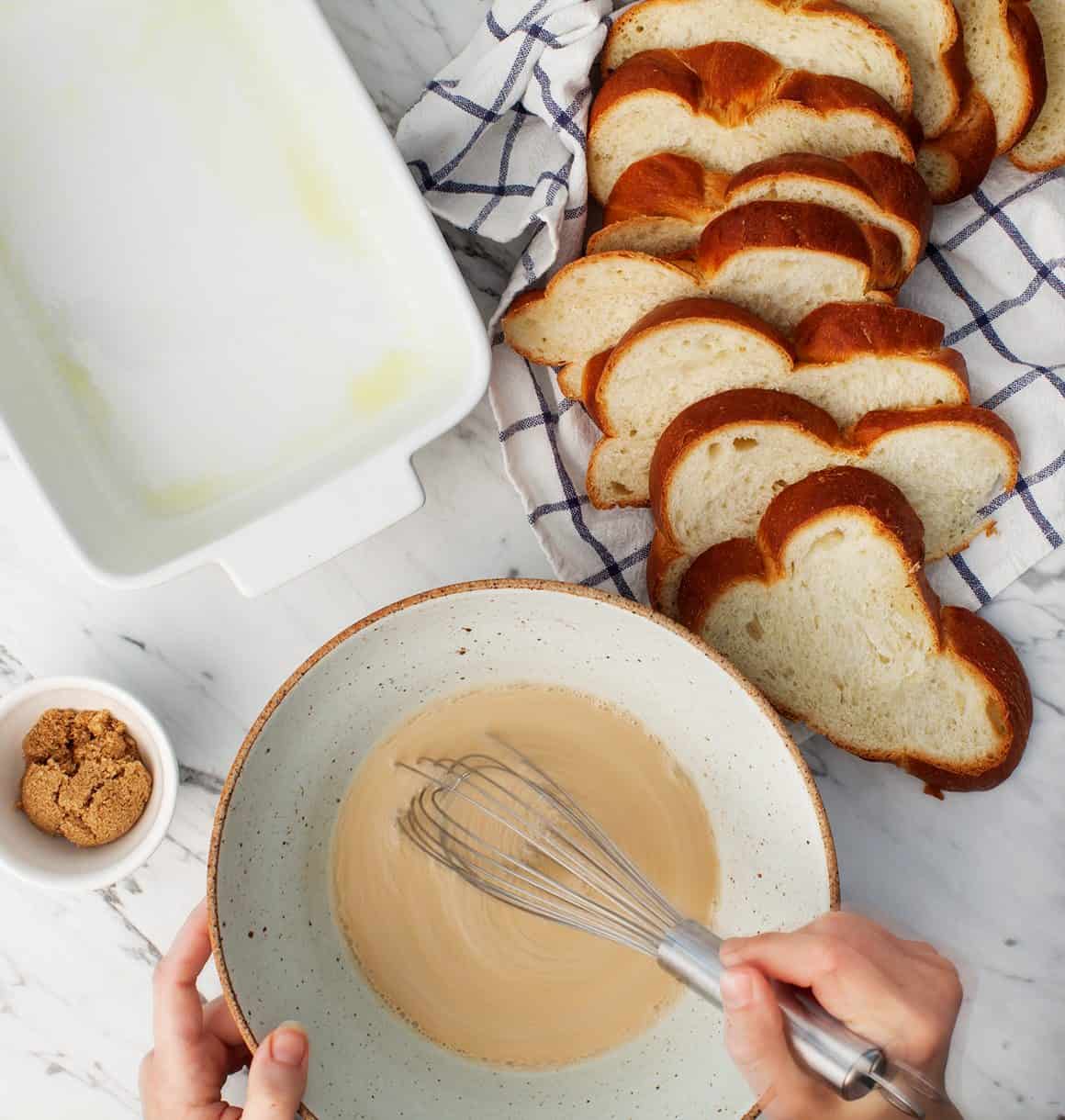 Sprinkle with more brown sugar and cinnamon mixture before baking. Once baked, I topped mine with pomegranates and toasted almonds, but feel free to serve this with whatever toppings or fruit you like – blueberries or raspberries would be delicious! 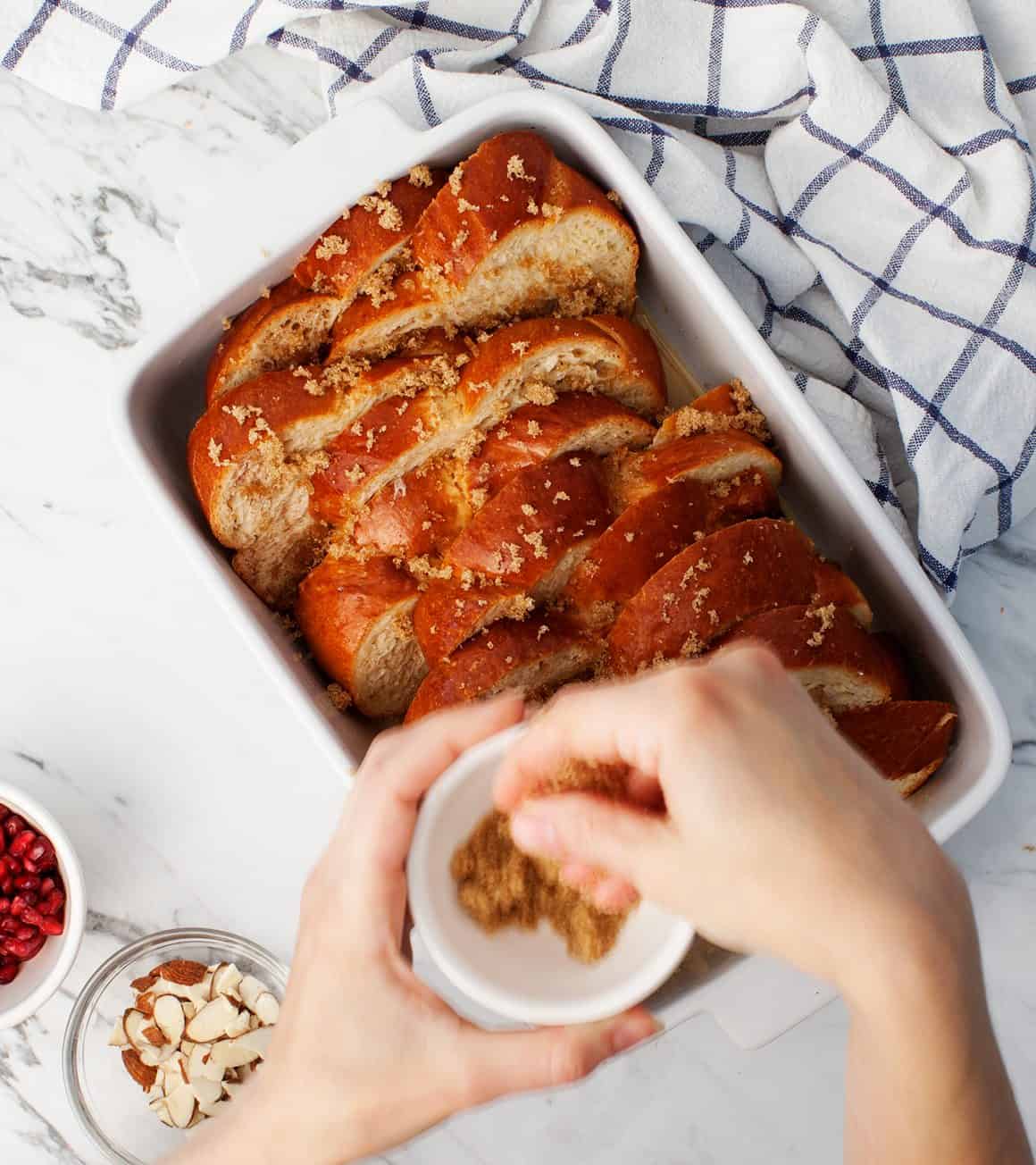 This recipe makes a hearty brunch on its own, but if you’re hosting a larger gathering, mimosas, baked oatmeal, fruit salad, breakfast casserole, shakshuka, or a frittata would all be great choices to go with it. Happy brunch-ing!

Print
Prep time
10 mins
Cook time
30 mins
Total time
40 mins
This cinnamon french toast bake is perfect for a holiday brunch! It's a healthy (healthy-ish) recipe made without heavy cream, but tastes every bit as indulgent.
Author: Jeanine Donofrio
Recipe type: breakfast
Serves: 4 to 6
Ingredients
For the topping:
For serving:
Instructions
3.4.3177
This post is in partnership with Truvia, thank you for supporting the sponsors that keep us cooking!