This chickpea flour pizza has the best gluten-free crust around! Top it with your go-to pizza toppings, or use this beautiful hummus & asparagus combo. 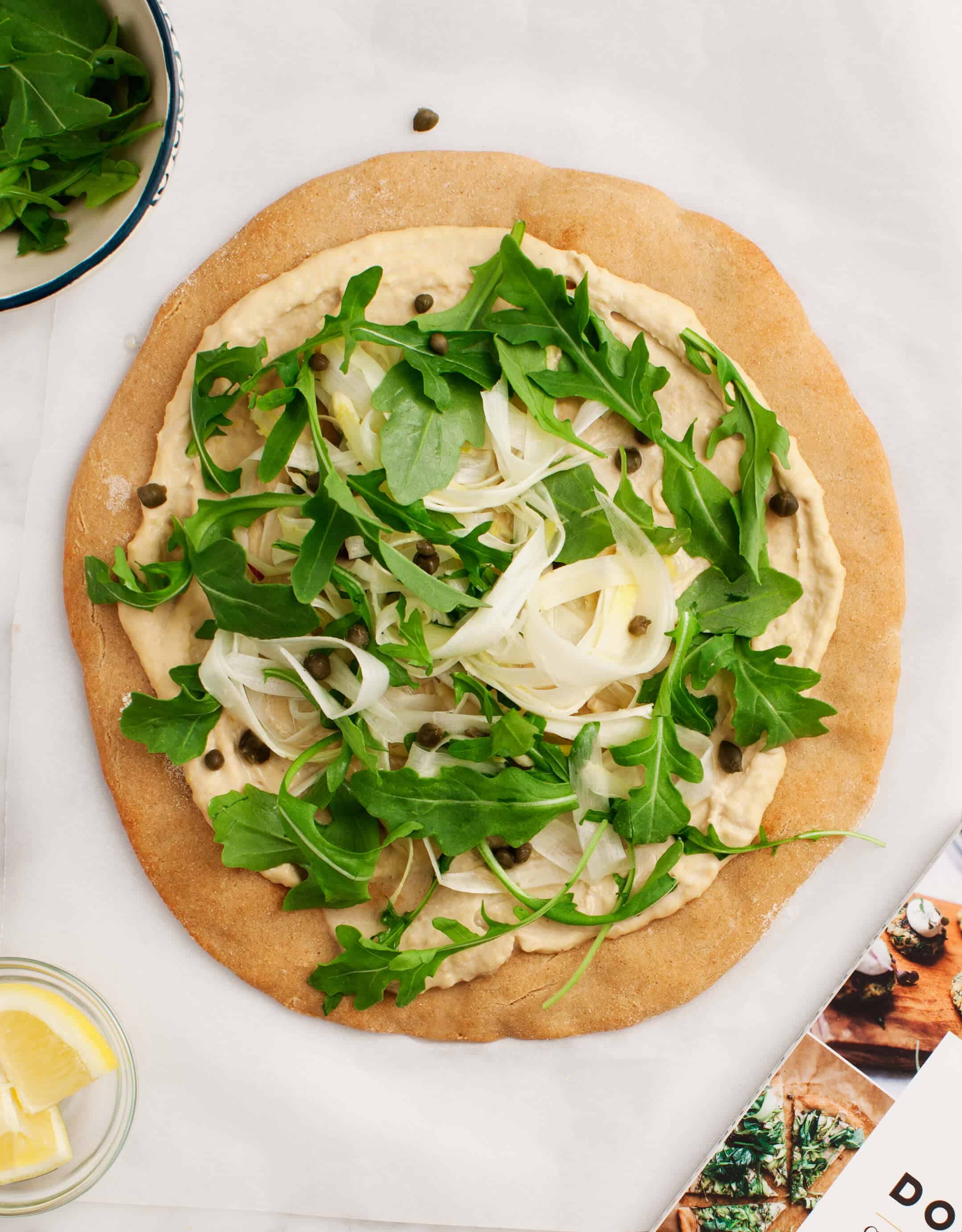 Whenever I announce that we’re having “pizza night!” Jack gets excited. But when I follow it with “gluten free pizza night!,” he knows that he’s about to work with overly sticky dough that he can’t toss in the air.

Air-tossing aside, this chickpea flour dough was easy to work with, and we both enjoyed making (and eating) this pizza, which comes from the book Chickpea Flour Does it All, by Lindsey Love. Lindsey is also the creator of one of my absolute favorite food blogs – Dolly and Oatmeal. I’m sure many of you are fans of hers as well. If you’re not, go check out her site! It’s jaw-droppingly gorgeous, and it’s full of gluten-free and dairy-free recipes. 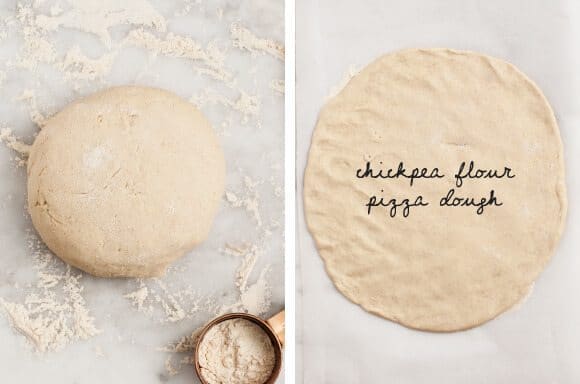 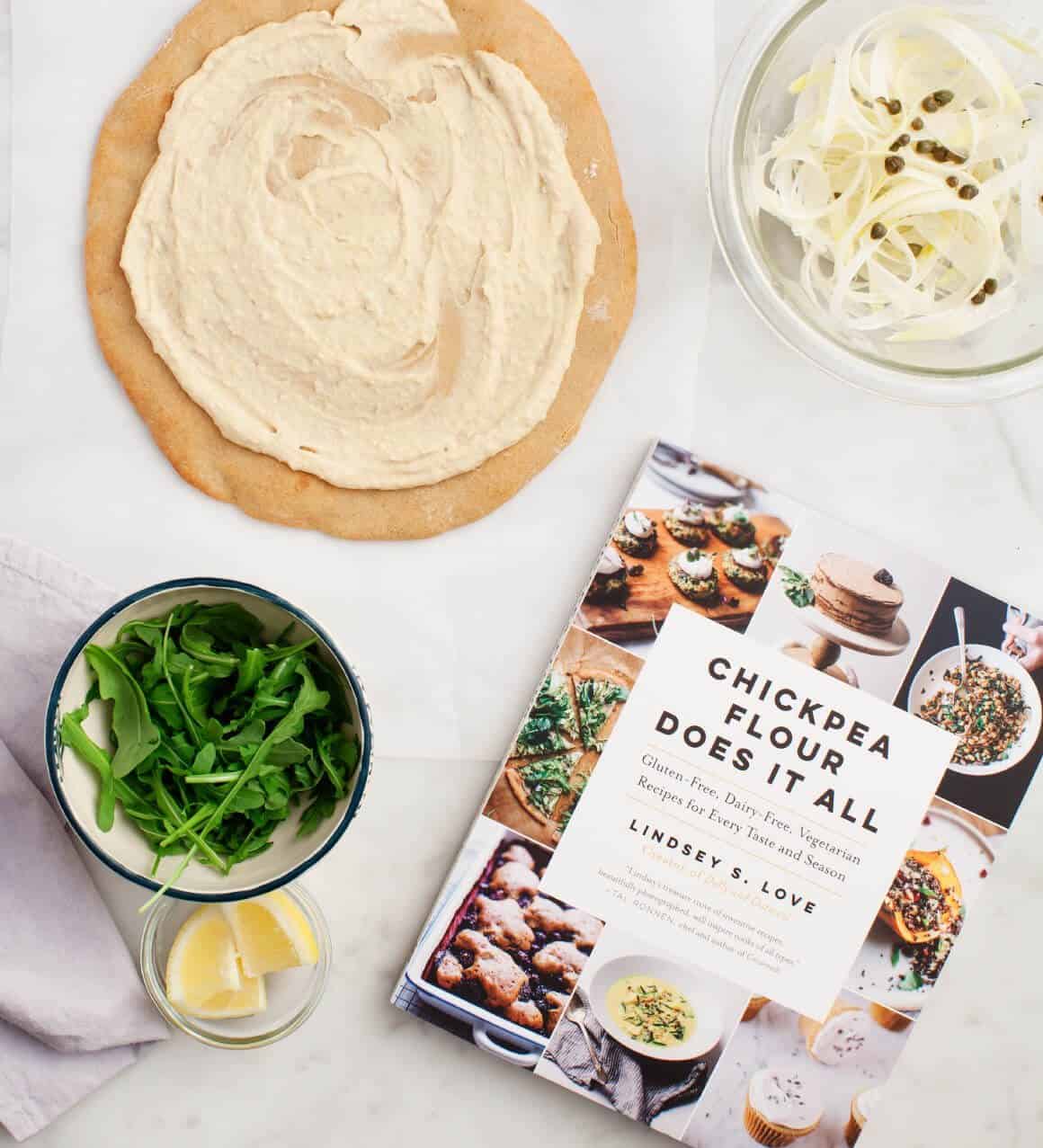 But this book – it’s so good! I don’t have very much experience cooking with chickpea flour, but I’m inspired to use it more since it’s so nutritious. I also made her Lavender Vanilla Cupcakes and was blown away by how good they were. I actually made them twice because the first batch disappeared too quickly.

This dough recipe requires a few extra ingredients that you might not have on hand, but once I had them all, I could easily make the rest of the recipes in the book. This chickpea flour pizza crust would be delicious with regular pizza toppings – sauce, cheese, or vegan cheese, but I followed Lindsey’s cue and made this light & lovely salad pizza. I couldn’t find green asparagus, so I used white. And her recipe calls for pea shoots, which I couldn’t find, so I used arugula.

This recipe made two medium sized chickpea flour pizzas, which was enough for us for two dinners. We made the dough, baked half of it one night, and the other half the next night. Lindsay notes that the crust also freezes well, so check out the recipe notes for her suggestions. 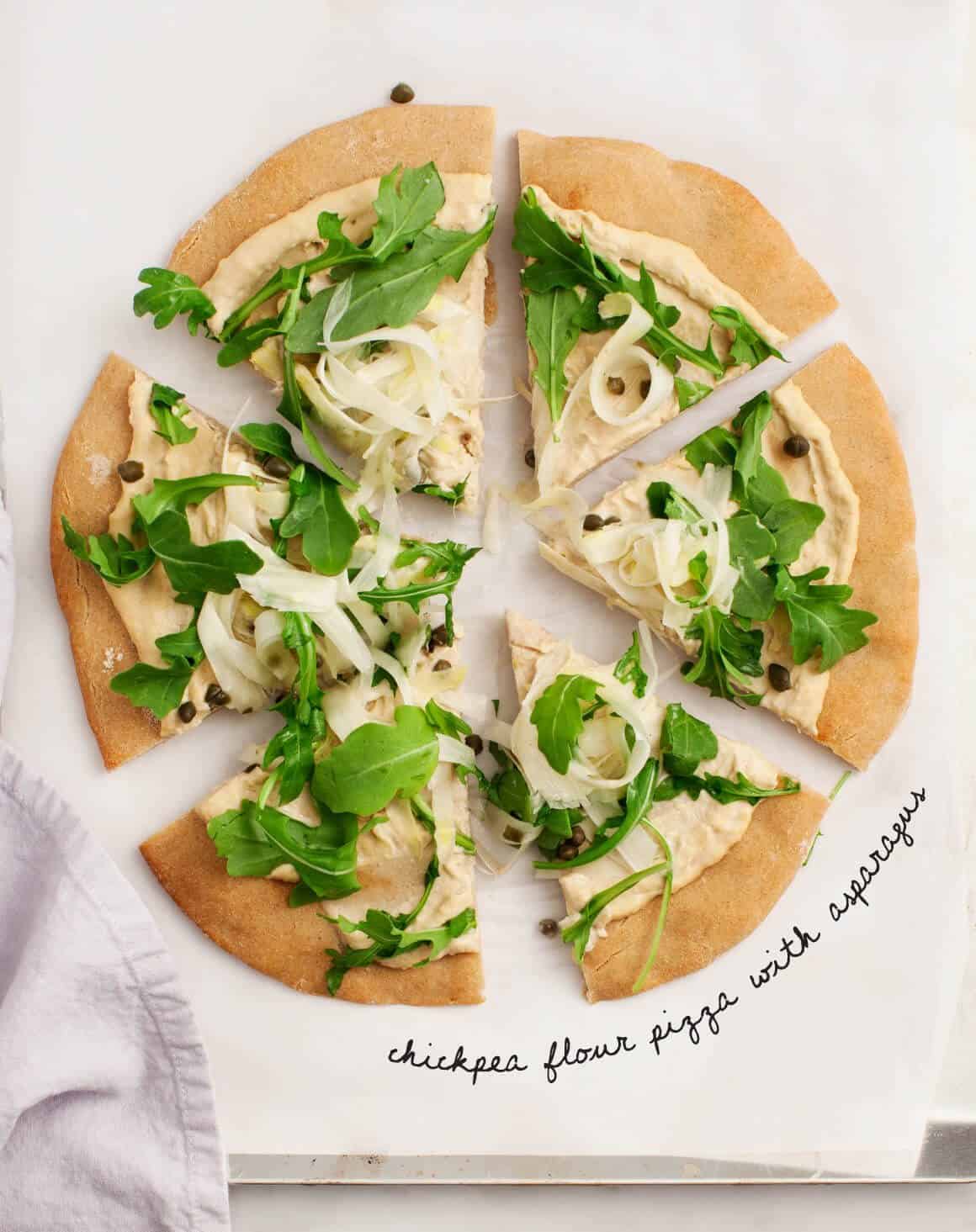 If you’re a fan of veggie-packed pizzas, go try this zucchini pizza, this vegan pizza, or this berry + basil pizza next!

Print
Recipe from: Chickpea Flour Does It All, by Lindsey Love
Author: Jeanine Donofrio
Ingredients
Dough*
Toppings
Instructions
Notes
*Note: Pizza dough can be stored in the freezer for up to 1 month. To thaw, remove from the freezer the morning of, or at least 5 hours before cooking, and allow the dough to come to room temperature. If not using the dough right away, store in the refrigerator until ready. Prepare the dough as directed.

Recipe from Chickpea Flour Does It All: Gluten-Free, Dairy-Free, Vegetarian Recipes for Every Taste and Season © Lindsey S. Love, 2016. Reprinted by permission of the publisher, The Experiment. Available wherever books are sold. theexperimentpublishing.com
3.4.3177
Did you make the recipe? I want to see!
Tag @loveandlemons on Instagram.
✕
Free Bonus:
5-Part Guide to Delicious Vegetarian Eating!