This loaded breakfast burrito recipe is the best way to kickstart your morning. Filled with eggs & fresh veggies, it's healthy, fun & easy to make! 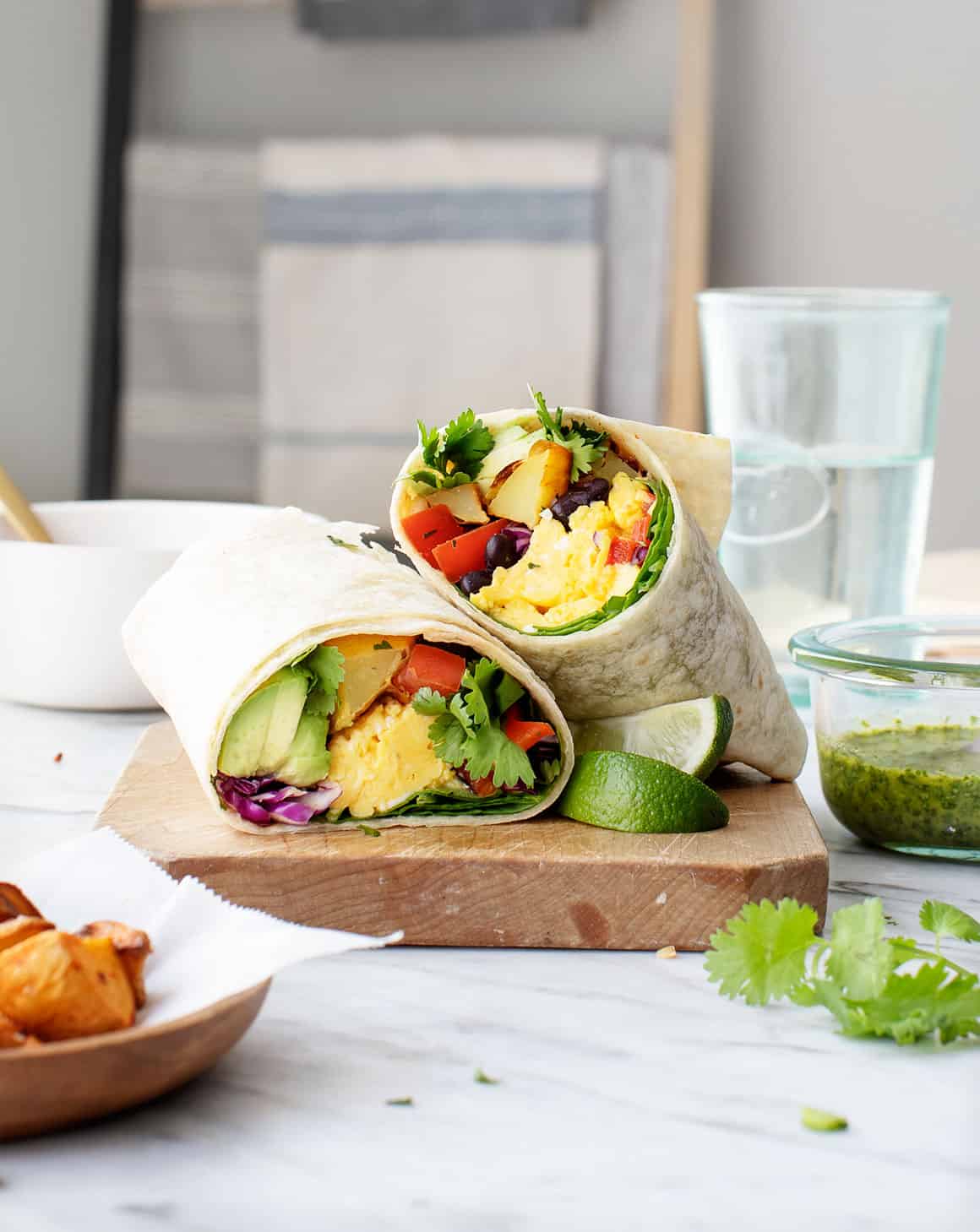 I’m typically a breakfast taco person, so this post is a little crazy for me – I’m making breakfast burritos! I know, I know… if you’re from Austin and you know that I lived in Austin, you’re probably saying “what is she doing?”… because Austin is the land of the taco. In fact, the city would probably kick you out if you made a breakfast burrito, but, well, I’m already out so today, I have this yummy breakfast burrito recipe that we just love. 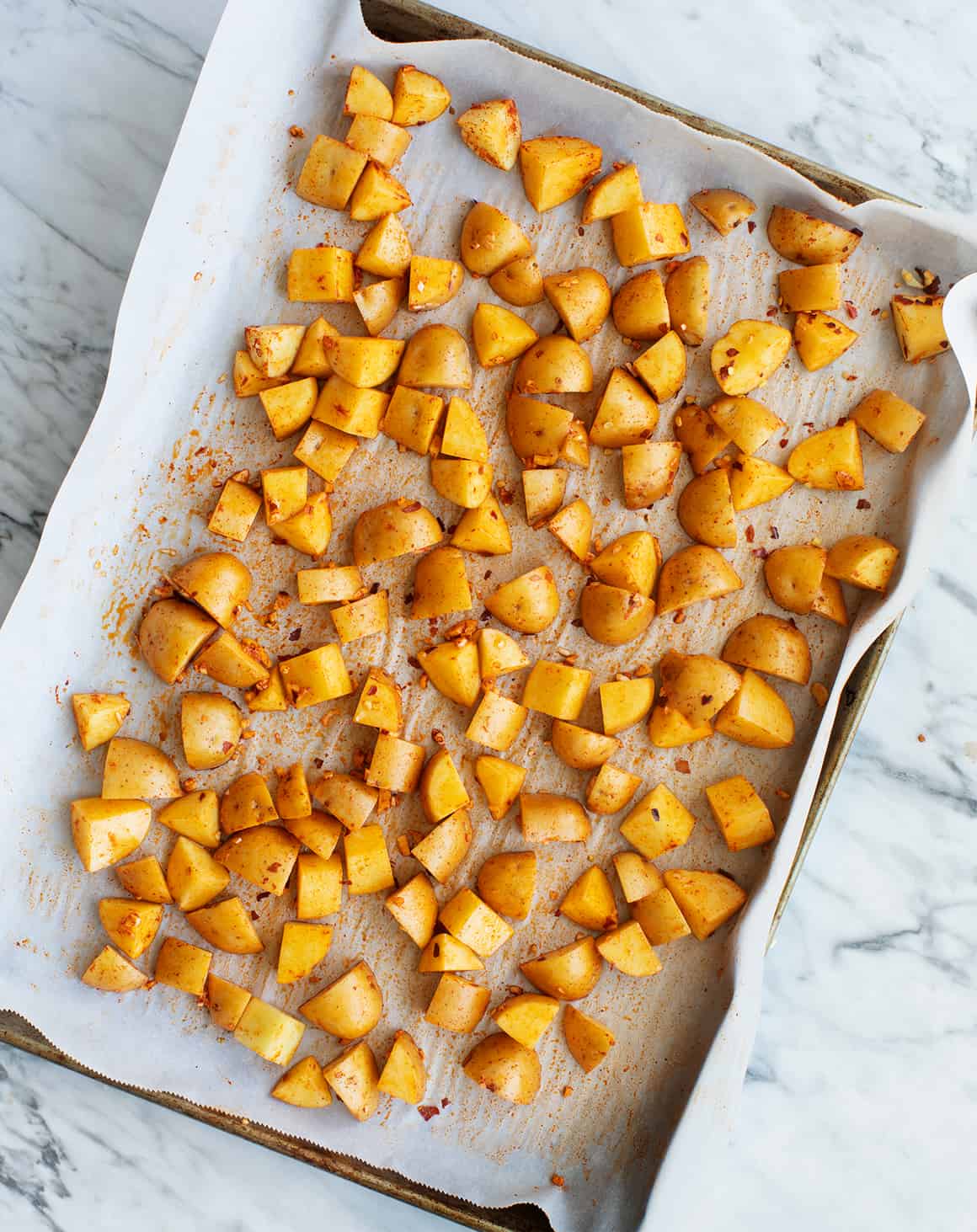 When I was making this breakfast burrito, I had leftover components from this taco salad in the fridge. I stuffed in the crisp red cabbage, charred poblano and bell pepper, pico de gallo, cooked black beans, and cilantro I had on hand, as well as these other key components:

I served my burritos with cilantro lime sauce for dipping!

How to Make a Breakfast Burrito – My Best Tips!

Once you have your ingredients assembled, you’re ready to roll! This step isn’t hard, but it’s the trickiest part of the recipe, so here are my tips for rolling success: 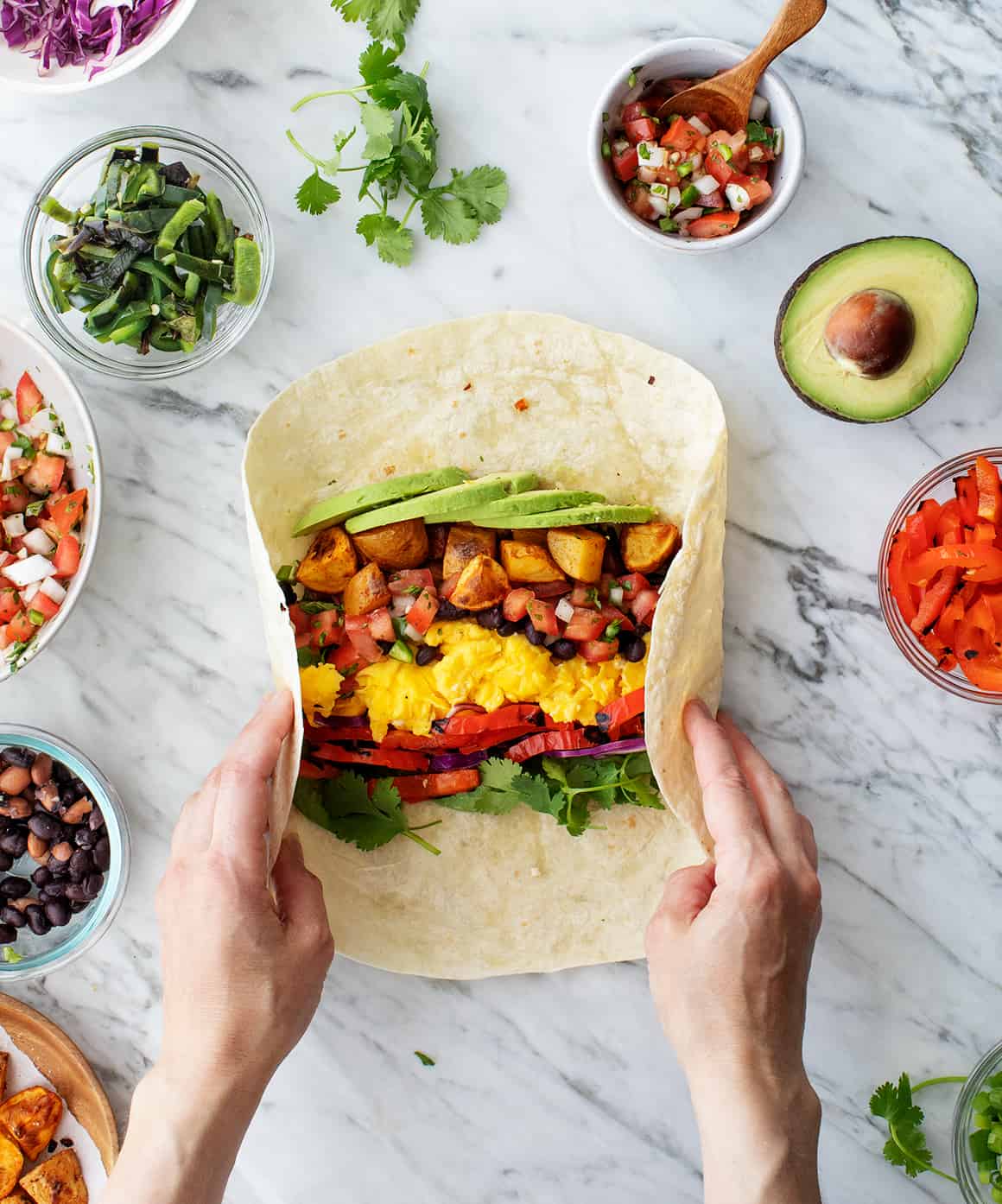 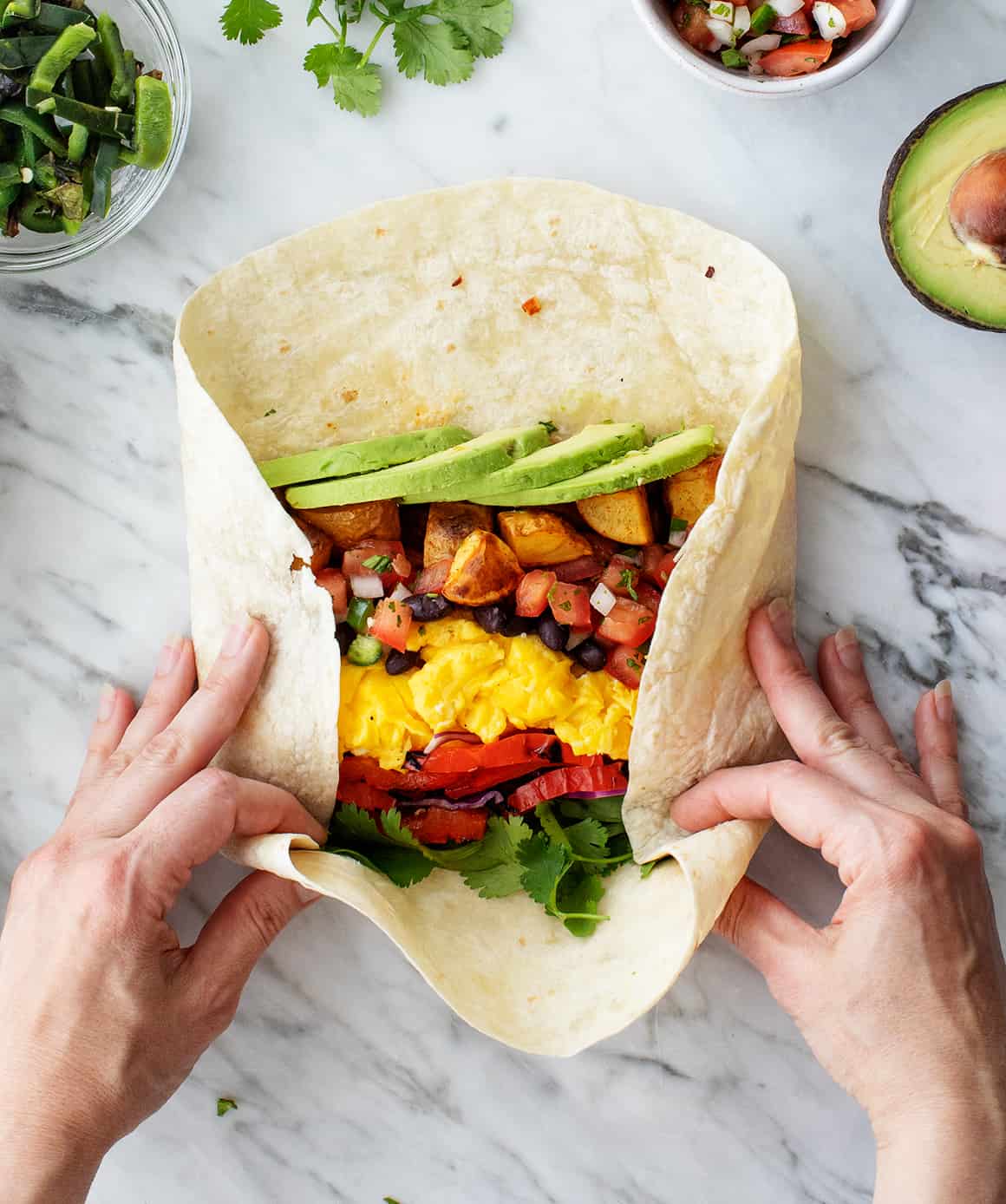 And that’s it! Breakfast burrito success! 🙂 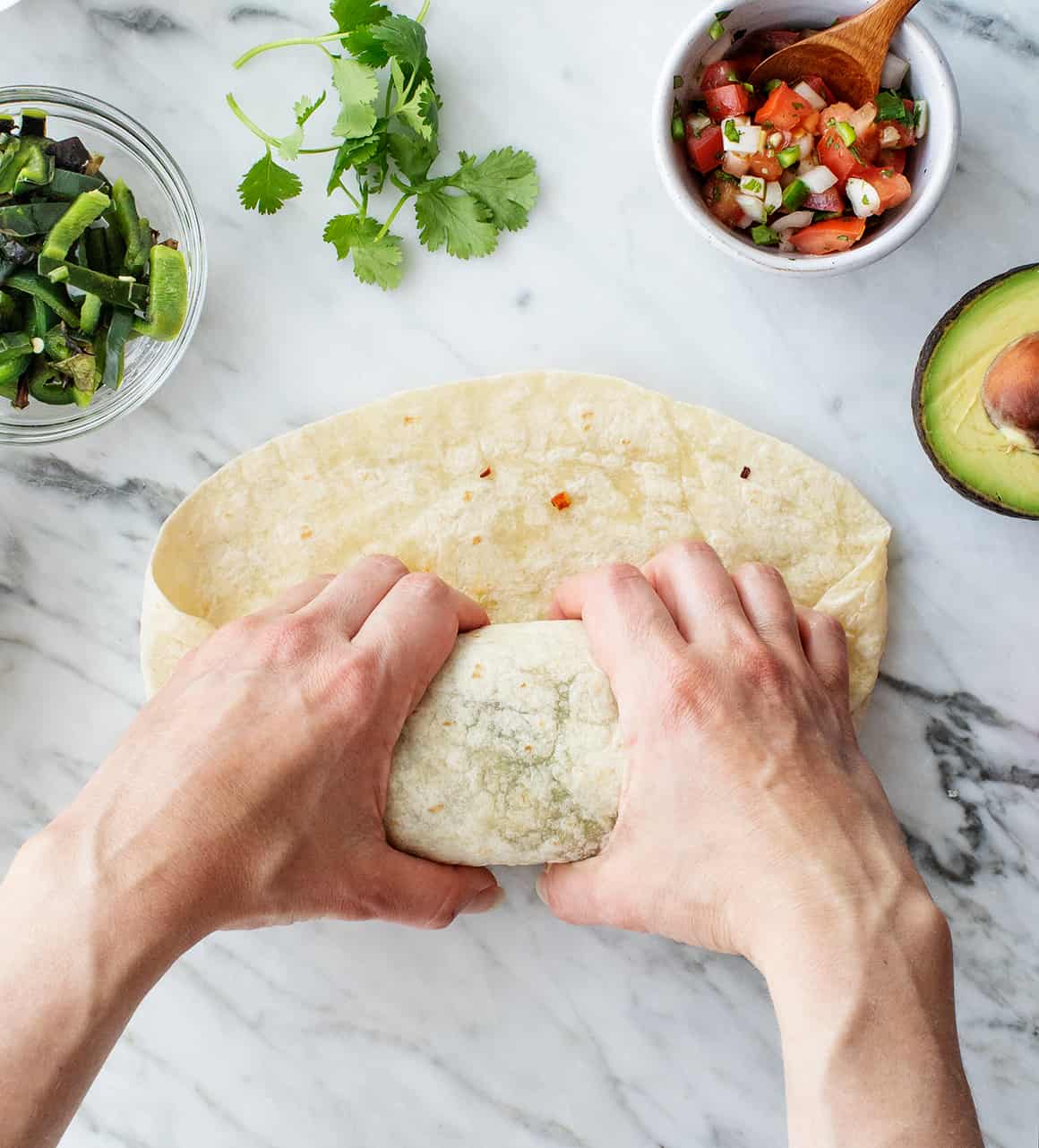 I would 100% recommend serving these burritos with cilantro lime dressing on the side for dipping. It adds a great zesty, fresh accent to the hearty ingredients inside. If you don’t have any on hand, or you don’t feel like making it, these would be just as good with drizzles of hot sauce, dollops of Greek yogurt or sour cream, or spoonfuls of tomatillo salsa on the side. Enjoy them for breakfast any day, or make them for a fun brunch with mimosas to drink! 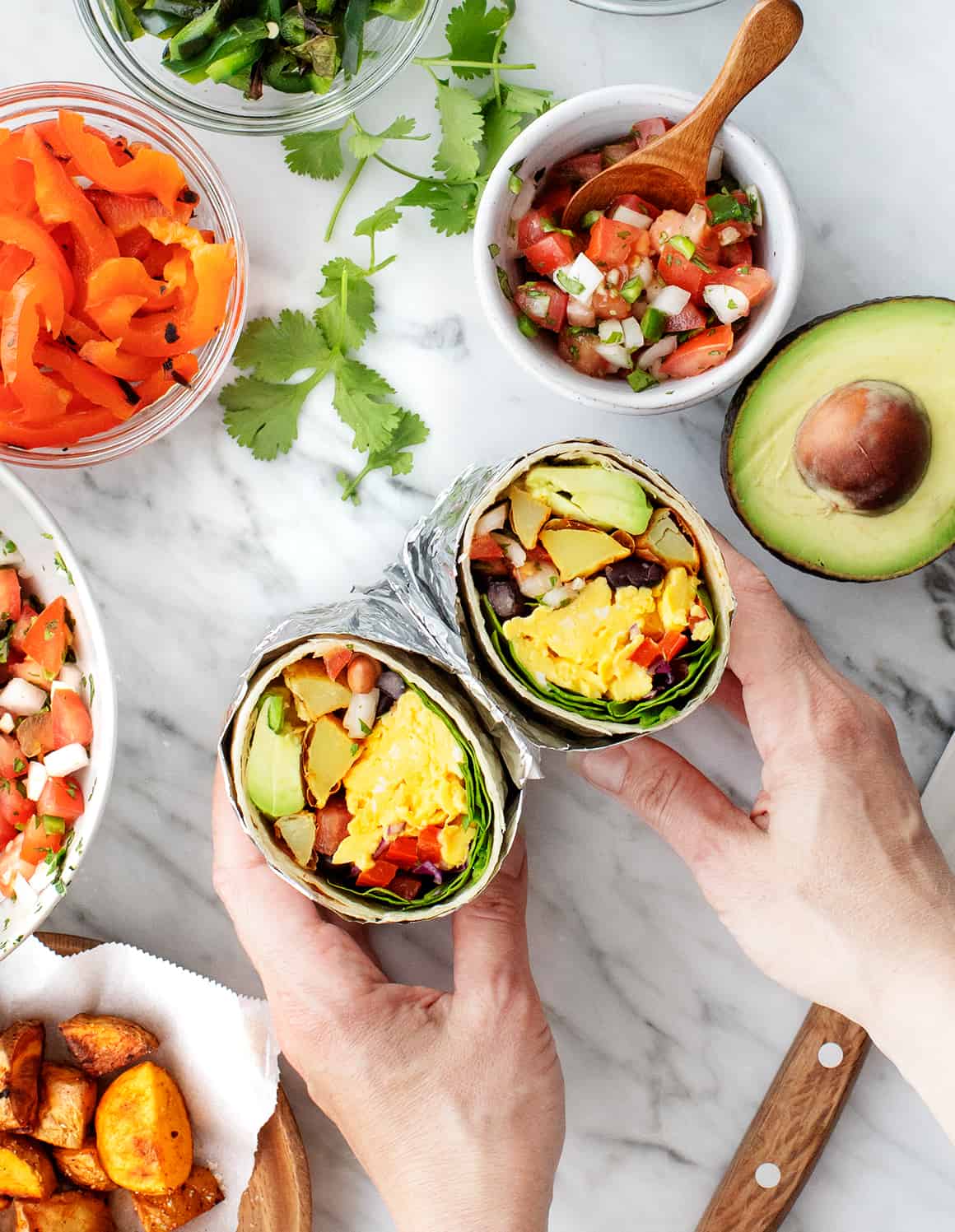 If you love this breakfast burrito recipe, try these breakfast tacos, these frittata muffins, or this smoothie bowl next. Then, find more healthy breakfast ideas here and more of our favorite brunch recipes here! 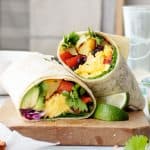 rate this recipe:
5 from 6 votes
Prep Time: 15 mins
Cook Time: 30 mins
Total Time: 45 mins
Serves 3 to 6 (makes 3 large burritos)
Pin Recipe Print Recipe
This hearty, healthy breakfast burrito recipe is sure to kickstart your morning. I love to serve it with Cilantro Lime Dressing for dipping, but hot sauce, sour cream, or your favorite salsa would be good too.

To make these burritos in advance, I recommend wrapping them in foil and storing them in the fridge for 1 to 2 days. Or better yet, make the components in advance and wrap them as you're ready to eat. I personally don't enjoy frozen/thawed eggs, so I don't suggest freezing these.