These BBQ Jackfruit Sandwiches are the ultimate party food. They're easy to make ahead and have wonderful meaty texture and spicy/smoky flavor. 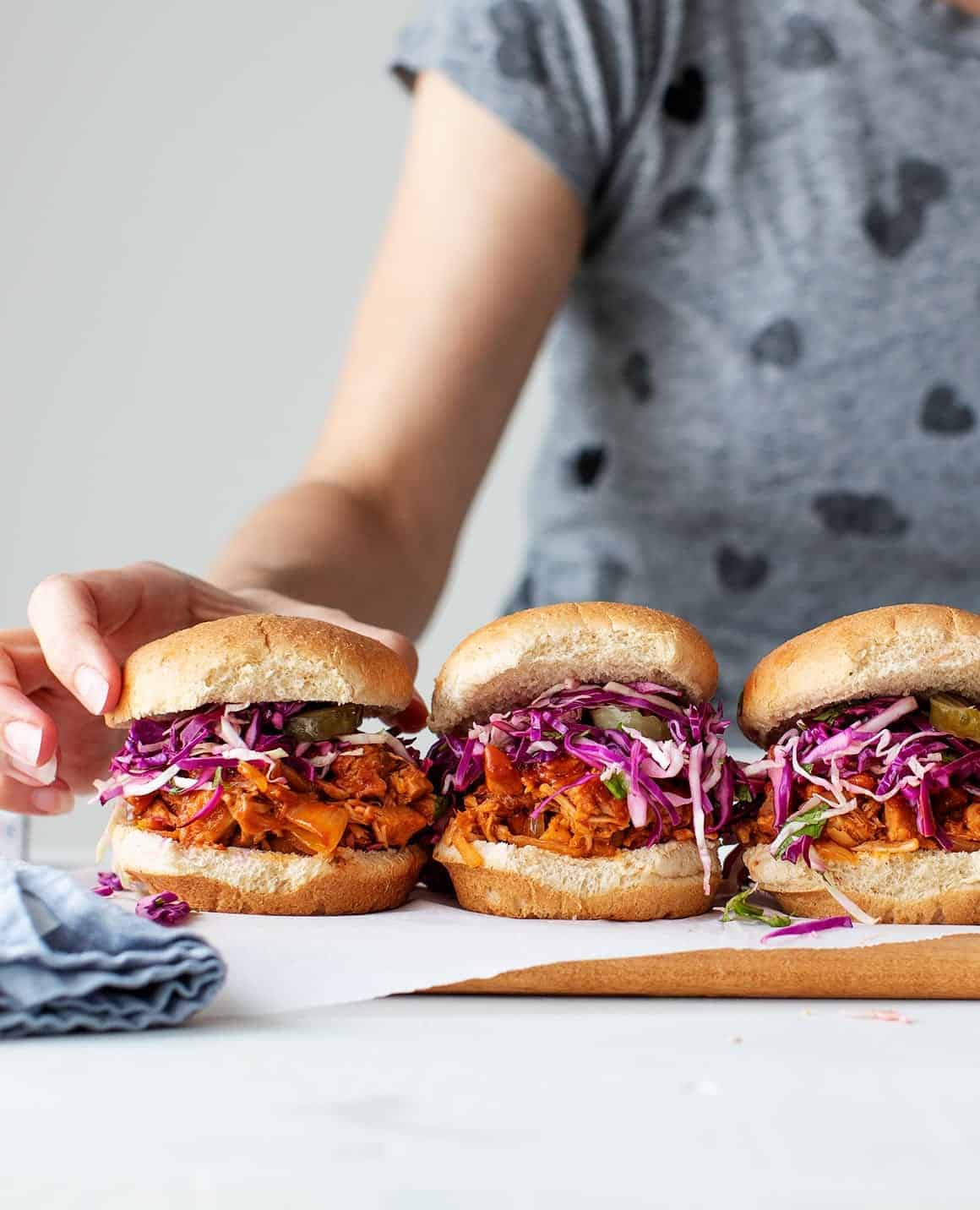 I’ve gotten SO many requests for BBQ Jackfruit recipes. It took me a little time to get this one just right, but here we are! These guys are meaty, juicy, smoky, a little spicy… and a total mess to eat, but isn’t that what saucy sandwiches are all about?

If you haven’t been asking for a jackfruit recipe, you’re probably now asking – what the heck is jackfruit?

Well, it’s a funny-looking fruit that most commonly grows in Africa, Asia, and South America. Though I’ve never had it ripe, it’s said to have a sweet flavor akin to other tropical fruits like pineapple and mango.

Around here, jackfruit is becoming easier to find in the canned section of grocery stores (I got mine at Trader Joe’s). The canned fruit is green, or unripe, so it doesn’t really have much flavor (it’s certainly not sweet and fruity). When you pull apart the pieces, it has the texture of shredded meat – perfect for making a vegan BBQ sandwich! 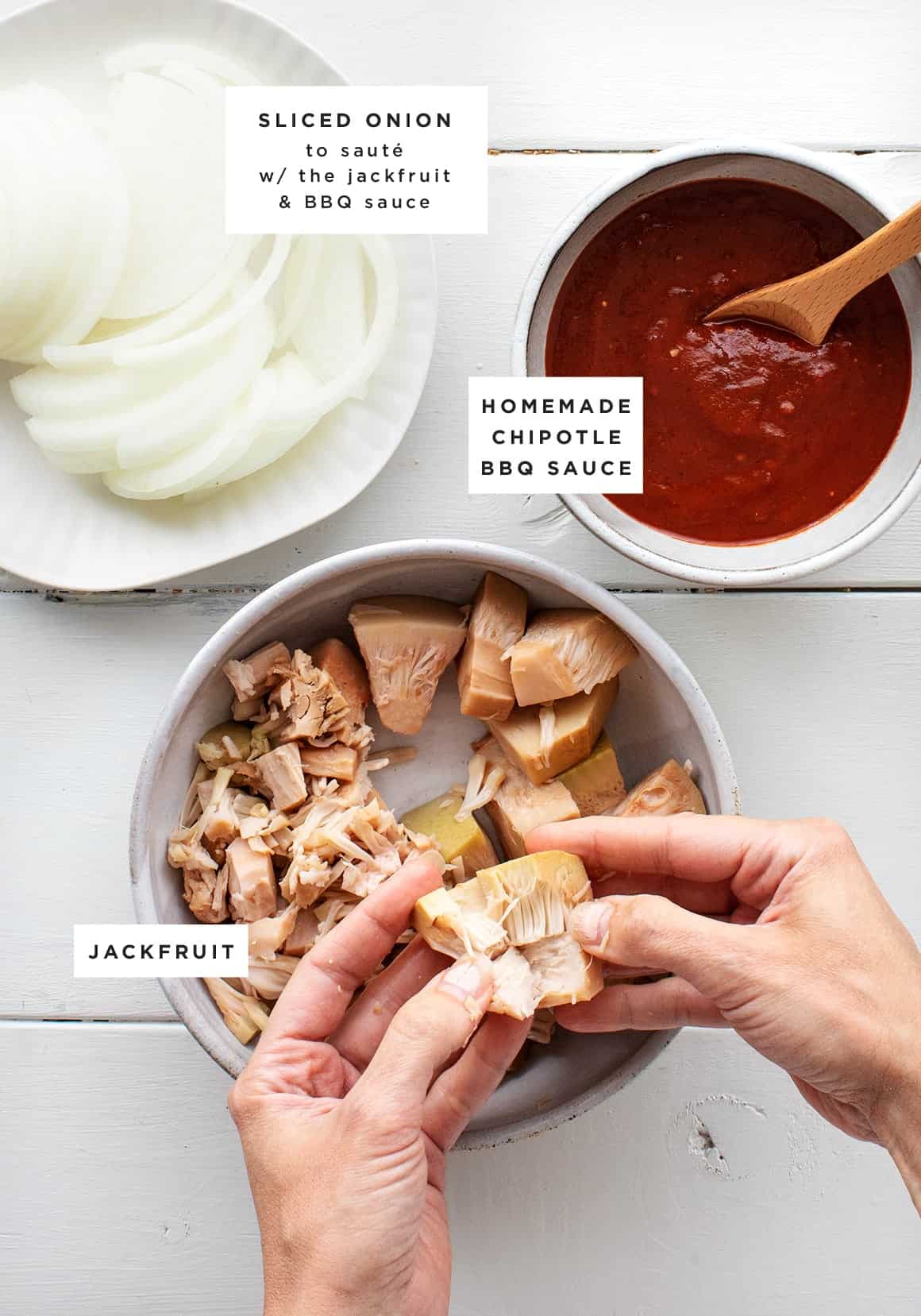 Like I said, canned jackfruit’s texture certainly feels meaty, but it’s low on flavor. That means the sauce you put with it really has to count. I’ve had so many jackfruit recipes at restaurants where the sauce was way too sweet, so my sauce here is on the smoky/spicy side, packed with flavor from chipotle peppers, adobo sauce, smoked paprika, and cumin.

I sauté the jackfruit with an almost-caramelized onion to deepen the flavor even more. 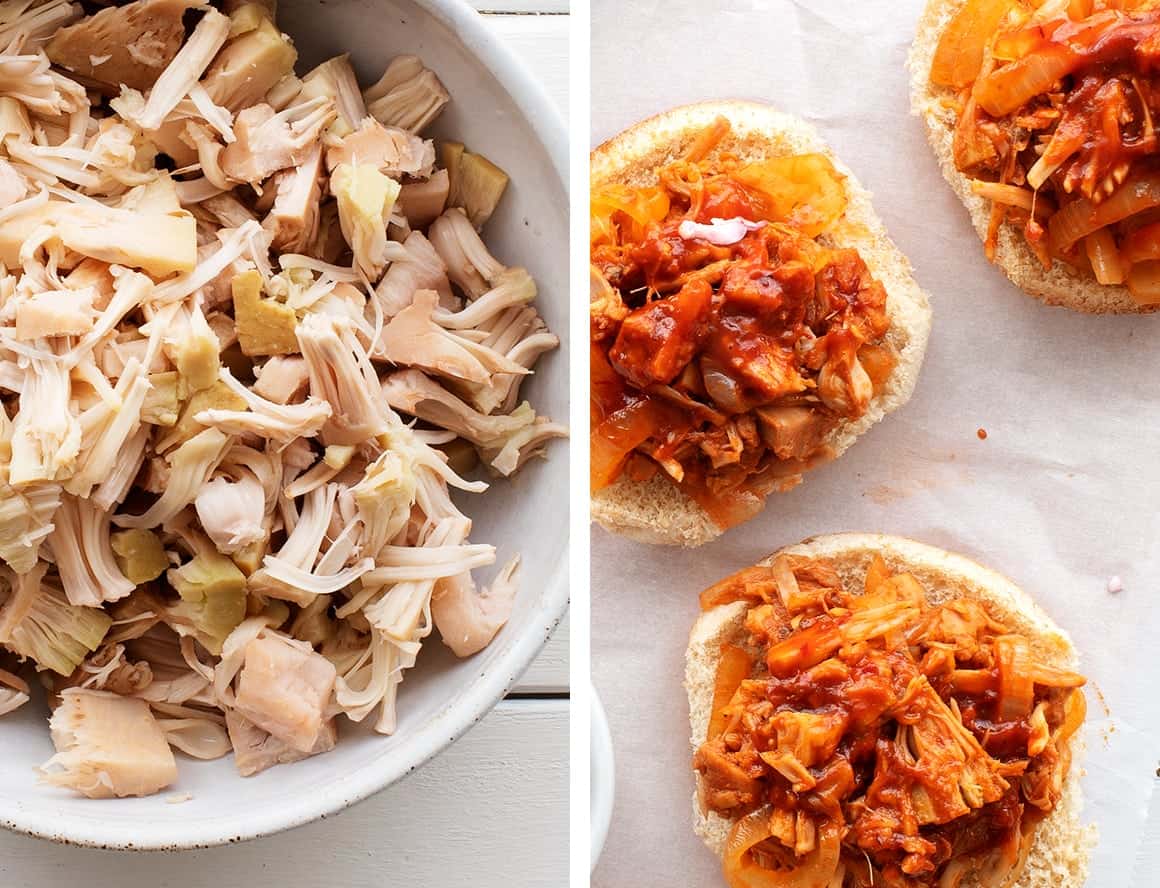 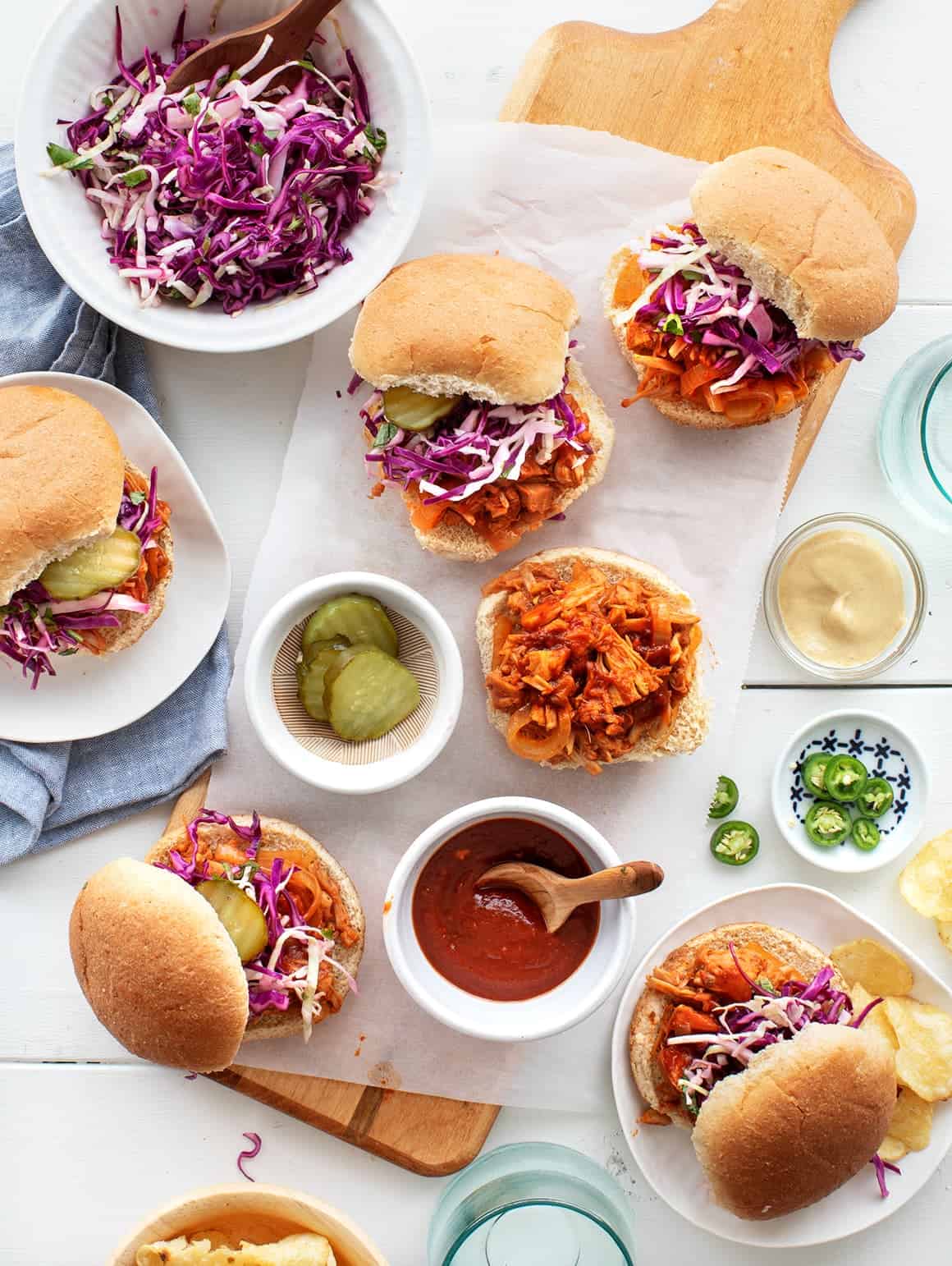 These BBQ Jackfruit Sandwiches are Perfect for Parties

This is a great make-ahead party meal. The BBQ sauce and the jackfruit can both be made in advance and reheated. When you’re ready to serve, make the quick cabbage slaw to go on top for crunch. It’s simply made with thinly shredded cabbage, cilantro, lime juice, olive oil, and a pinch of salt. Serve these with bread & butter pickles or pickled red onions, and whatever other fixings you like!

Oh, and don’t forget extra BBQ sauce on the side for serving – so juicy! We love these sandwiches with sweet potato fries. 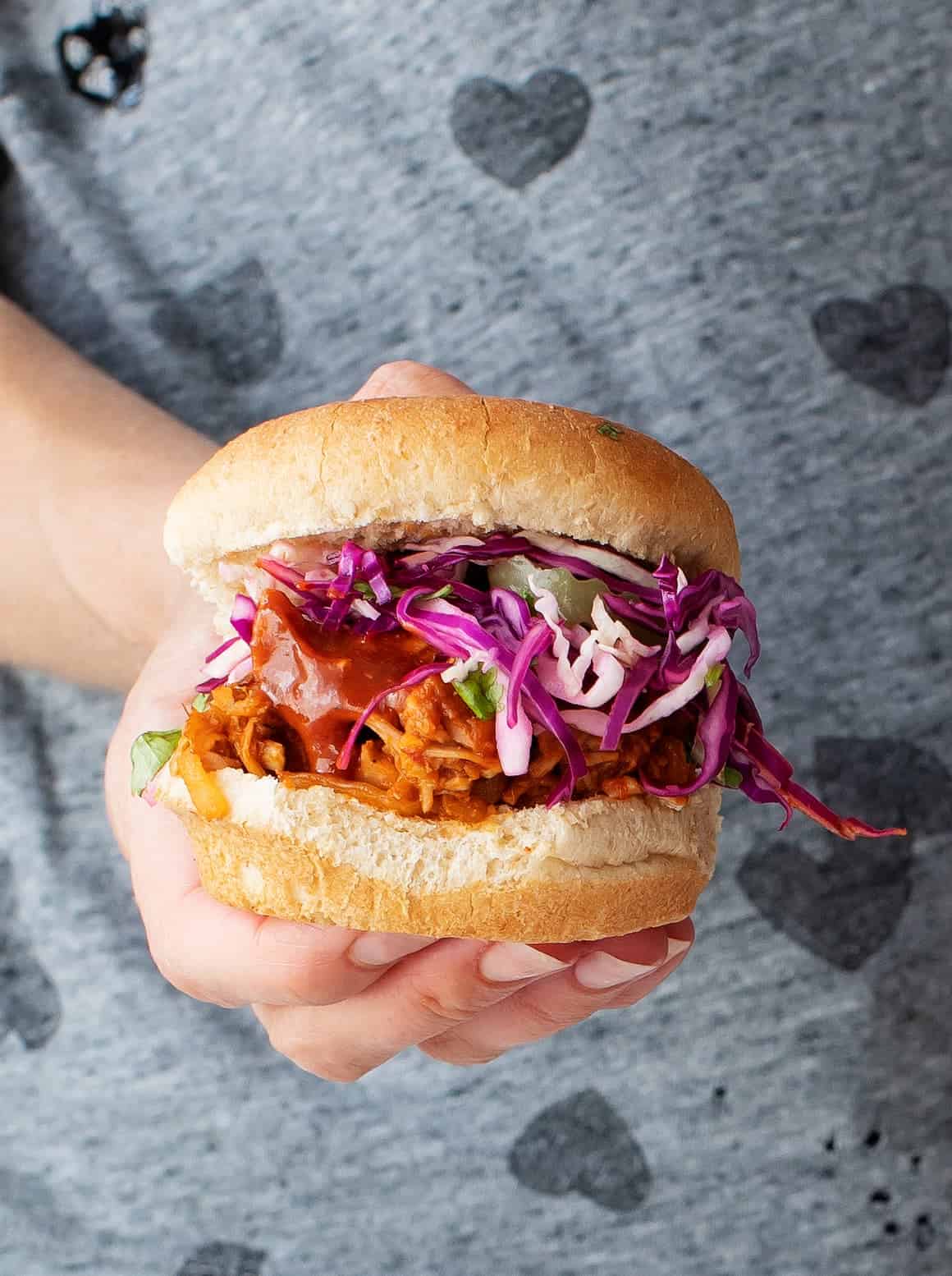 Try these tacos or these taquitos! For more vegan recipes, check out this post! 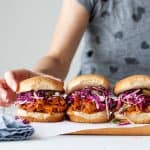 rate this recipe:
5 from 6 votes
Prep Time: 15 mins
Cook Time: 35 mins
Total Time: 50 mins
Serves 4 to 6
Pin Recipe Print Recipe
These BBQ sandwiches are the ultimate party dish. Prep the components ahead of time, and heat the jackfruit and assemble the sandwiches right before serving!