These baked zucchini chips are the best summer snack! Hot from the oven, they're crisp on the outside, juicy in the middle, and full of Parmesan flavor.

side dishes — Jump to recipe 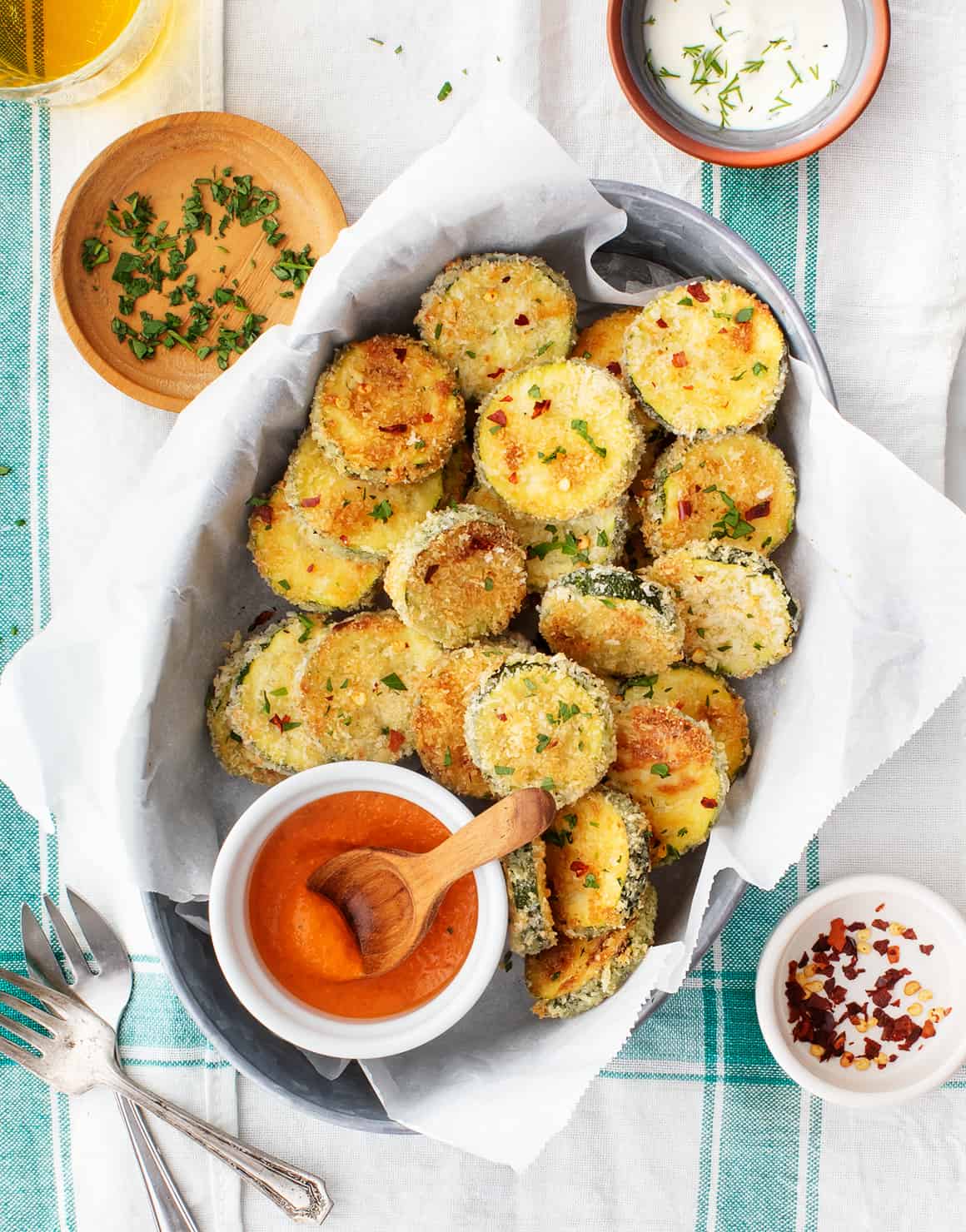 Move over, potato chips! If you’re craving a salty, crunchy summer snack, these baked zucchini chips are exactly what you need. The first time I tested this recipe, I stood at the counter, eating chip after chip. After the first one, I wondered, “Are they crispy enough?” I needed to have another. “Are they salty enough?” I had to eat just one more. “Do they need more cheese?” My empty baking sheet had the answer. These little guys were perfect just the way they were.

Since then, I’ve had this recipe on repeat. In the past, I’ve avoided baked zucchini recipes, choosing to grill zucchini or eat it raw instead. For my taste, baked zucchini usually gets too watery and mushy as it cooks. But here, a Parmesan and panko coating solves everything. It stays nice and crisp as the zucchini bakes, so when the chips come out of the oven, they’re crispy on the outside, tender in the middle, and full of rich Parmesan flavor. Whether you serve them as a side dish or afternoon snack, these zucchini chips will disappear in no time. 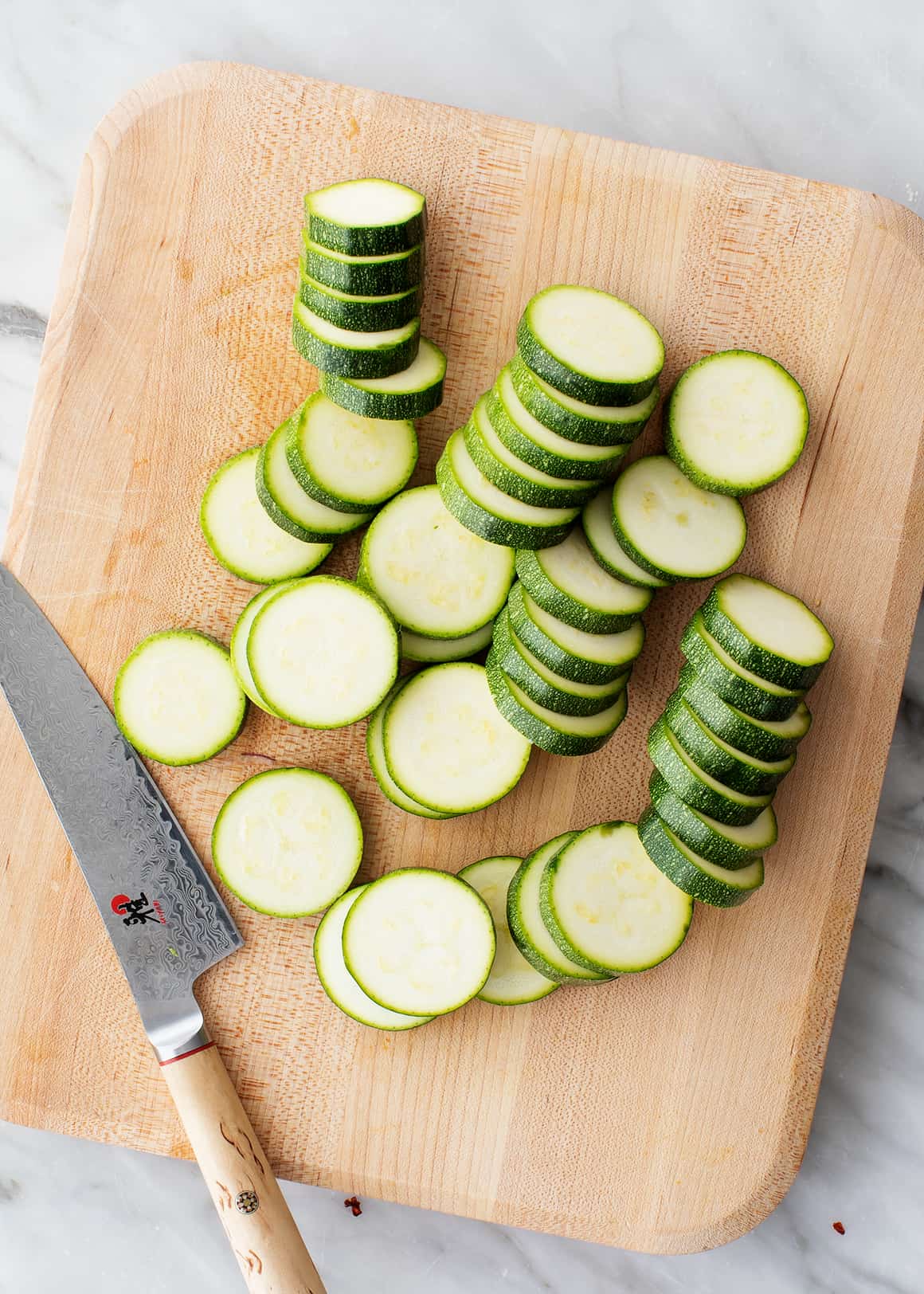 How to Make Zucchini Chips

Like all the best snacks, these crispy baked zucchini chips are quick and easy to make. I like to think of this recipe in three parts:

That’s it! The whole process takes under 30 minutes from start to finish. 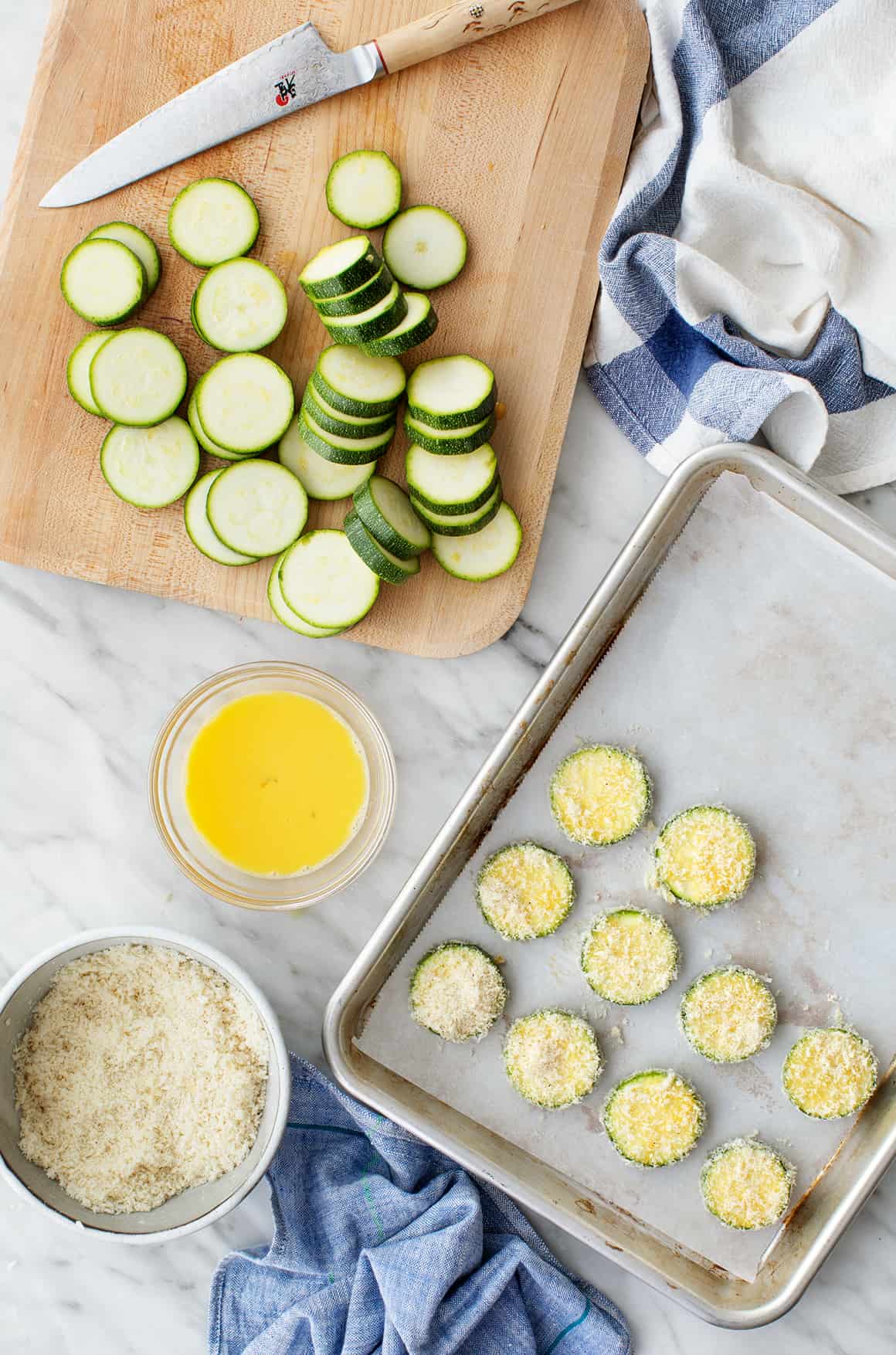 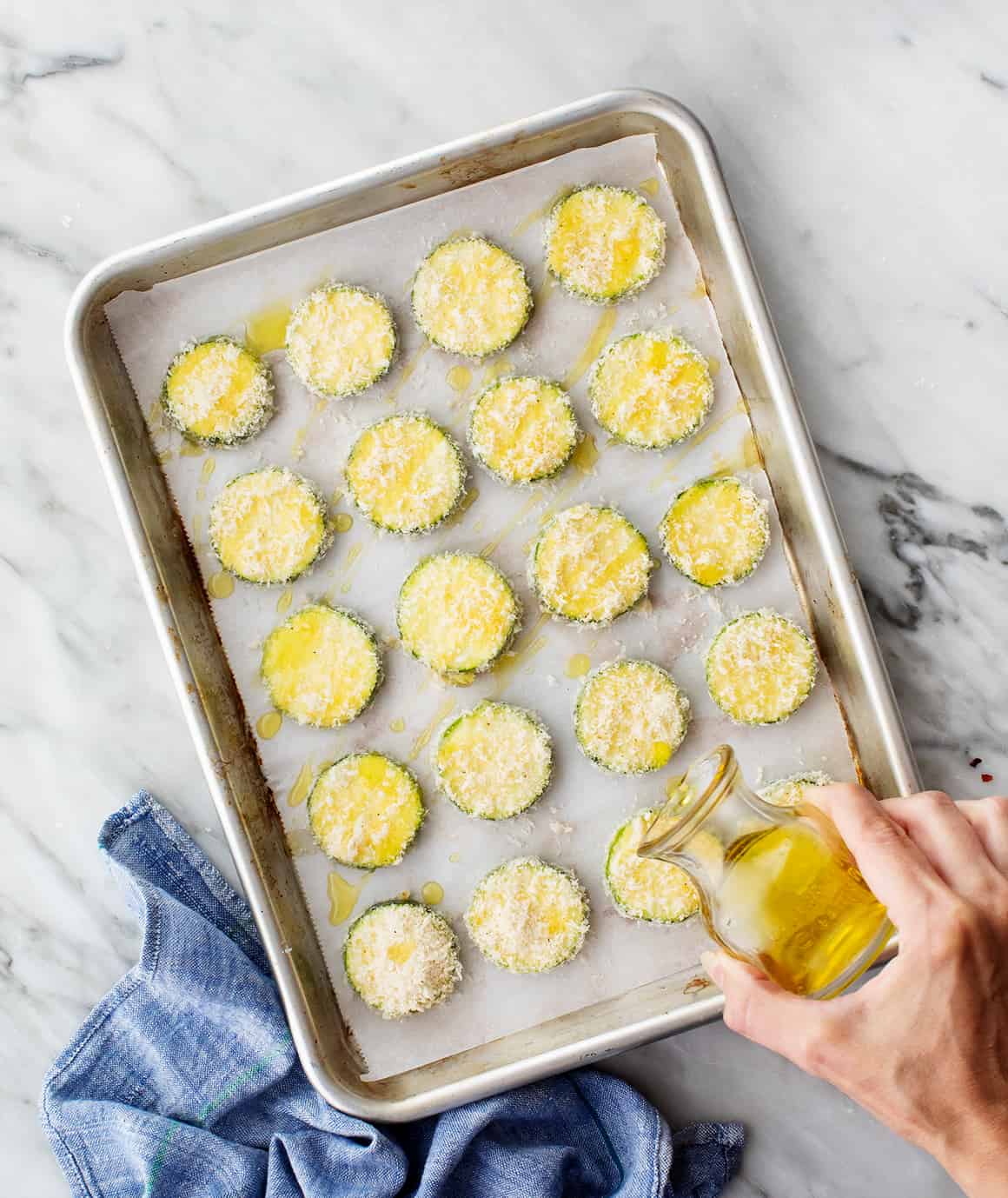 These baked zucchini chips are best right after they come out of the oven. They soften as they cool, so eat them as soon as you can, when they’re still hot, juicy, and crisp. Most often, I enjoy them plain, straight off the baking sheet, but they’re fantastic with dipping sauces too. Try pairing them with romesco sauce, pesto or vegan pesto, tzatziki, cashew cream, or marinara!

Eat this baked zucchini recipe on its own as a snack, or serve it as a side dish with any summer main dish. I love it with my best veggie burger, black bean burger, quinoa burger, or BBQ Jackfruit sandwiches. It would also be a fun starter for these pasta recipes: 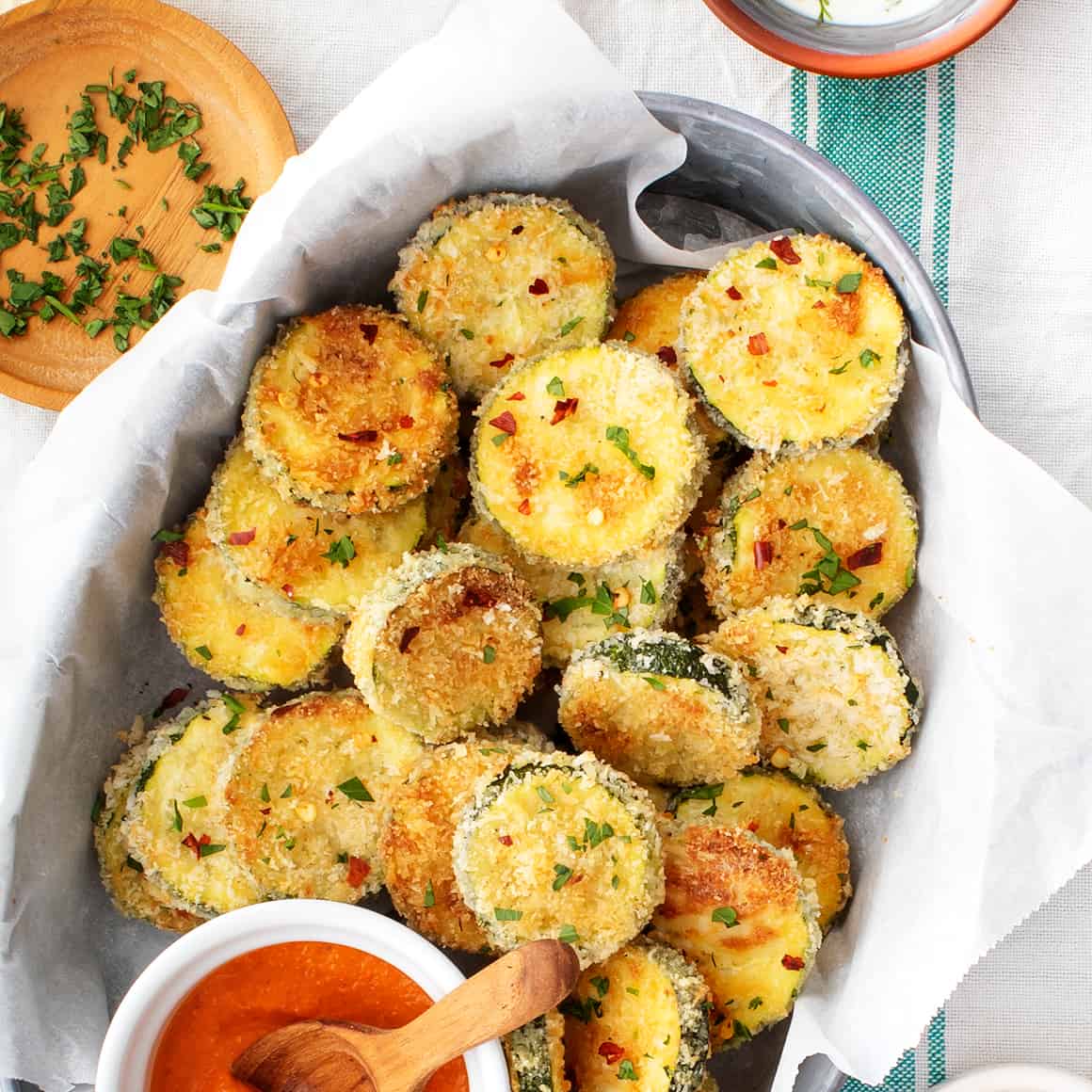 If you love these baked zucchini chips, try cooking zucchini in one of these recipes next:

And if you still want more zucchini recipes, check out this post! 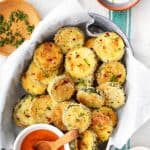 rate this recipe:
5 from 19 votes
Prep Time: 10 mins
Cook Time: 17 mins
Total Time: 30 mins
Serves 4
Pin Recipe Print Recipe
These crispy baked zucchini chips are a delicious summer snack or side dish! I love them on their own, but they're also yummy with dipping sauce. See the recipe below or the post above for suggestions!

*Make this recipe vegan by replacing the egg with ¼ cup nut milk mixed with 1 tablespoon ground flaxseed.
Did you make the recipe? I want to see!
Tag @loveandlemons on Instagram.
✕
Free Bonus:
5 Tips for a Delicious, No-Fuss Thanksgiving