A perfect baked potato has crispy skin and fluffy insides. My method for how to bake a potato works every time, so load up your spuds, and dig in!

side dishes / vegetarian — Jump to recipe 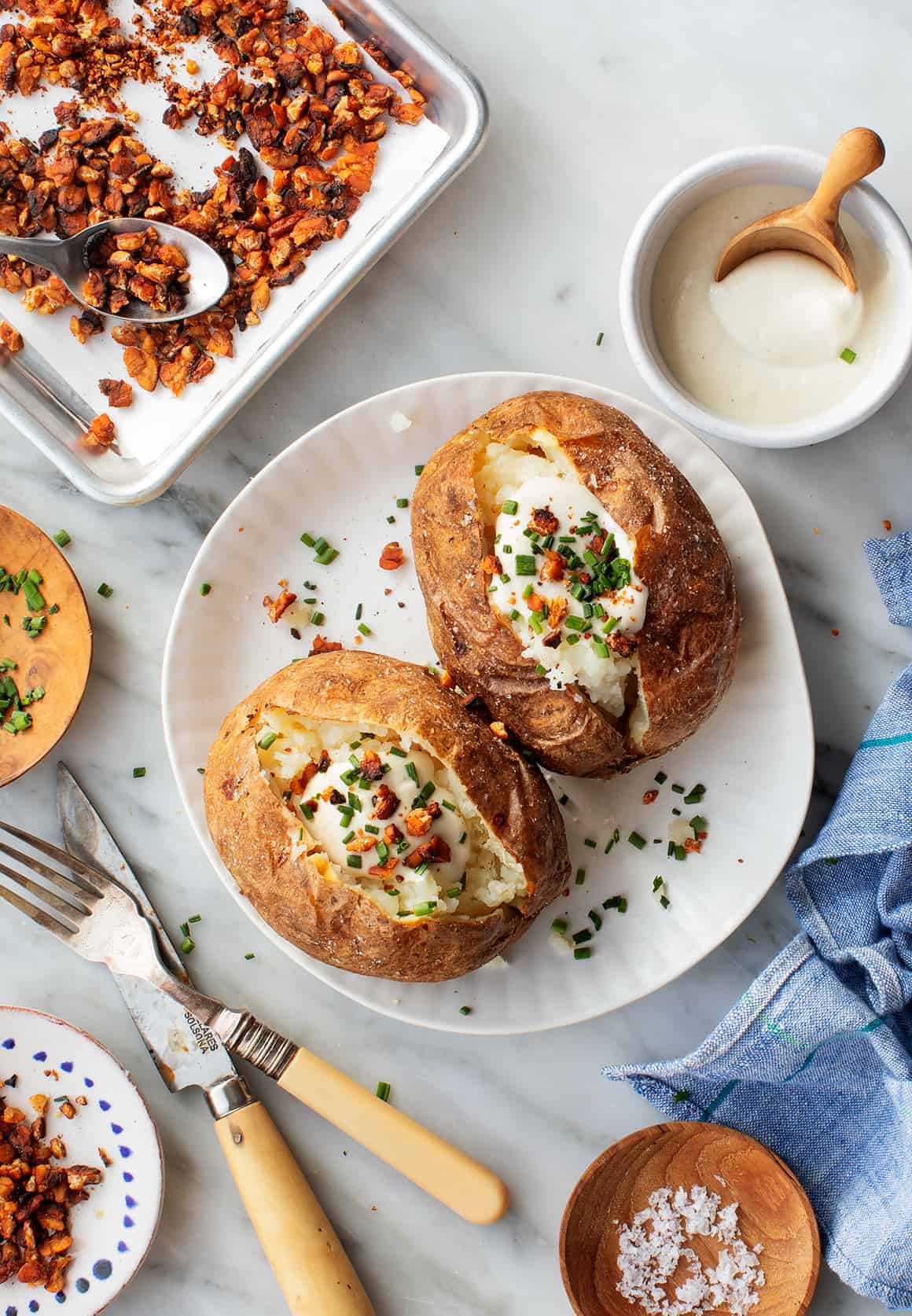 A perfect baked potato is hard to beat. The outside is brown and crisp, coated in a crust of sea salt. Pierce the skin, and your fork gives way to a soft, fluffy interior. It might be hard to resist eating the whole thing straight out of the oven, but if you take the time to top it with a pat of butter or a dollop of (cashew) sour cream, you won’t be able to deny that it was worth the wait.

Reading this, you might be surprised to learn that until recently, I wasn’t a baked potato fan. I thought they were bland on their own. Whenever I had them at restaurants or at home as a kid, the toppings were always the main attraction. The potatoes themselves would be shriveled and soft, meager vessels for sour cream, cheddar cheese, and bacon.

But this salt-crusted baked potato recipe changed everything for me. In it, the potato becomes the main event. Don’t get me wrong, a little butter or sour cream goes a long way here, but the potatoes come out of the oven with perfectly crispy, flavorful skins and creamy, piping hot interiors that taste delicious as they are. Serve them as a hearty side dish, or load them up and call them dinner. You’ll love them either way! 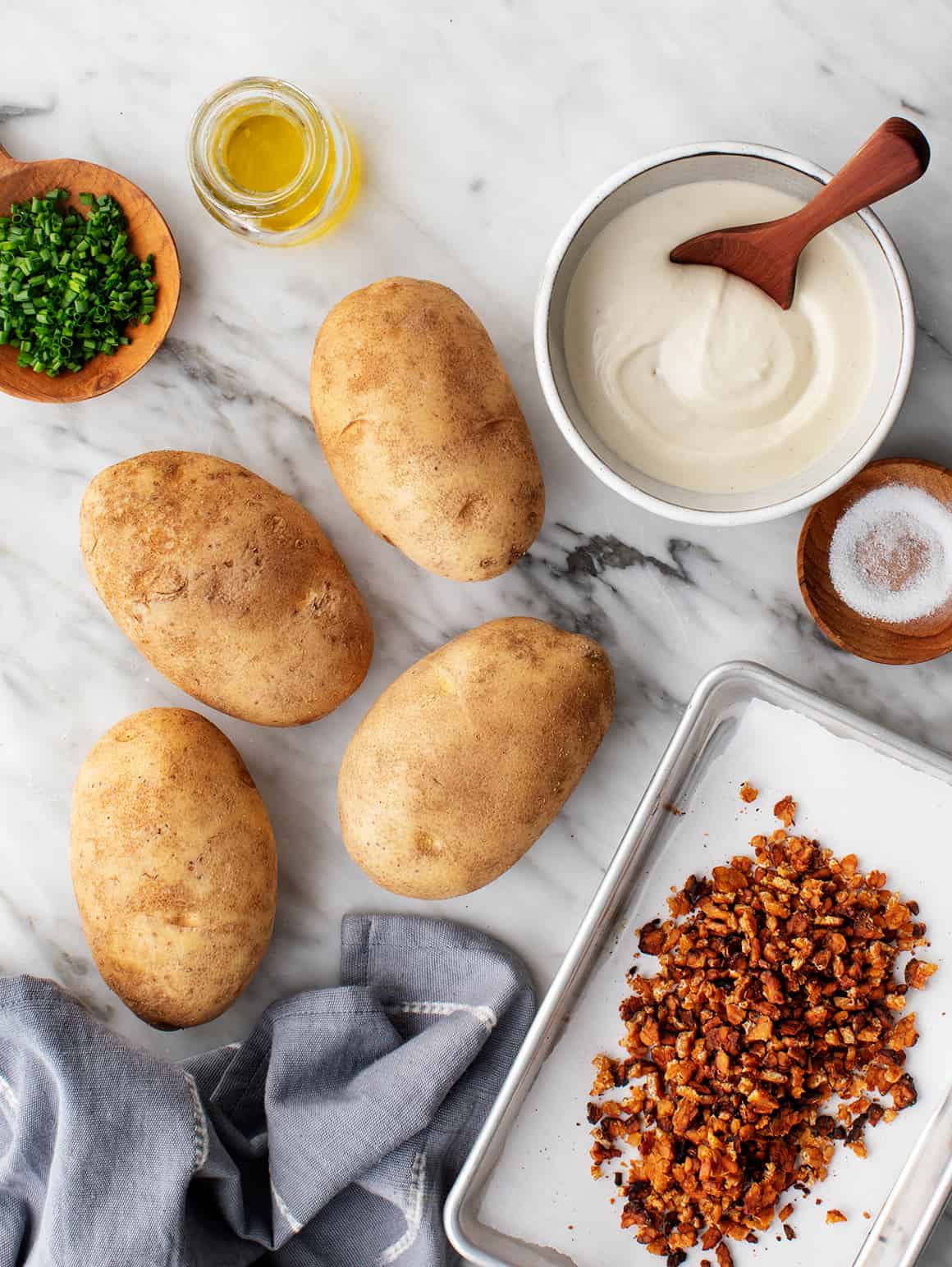 How to Bake a Potato

I like to use russet potatoes here, as their skin really puffs up and becomes crisp in the oven. Along with the potatoes, you’ll just need olive oil and salt to make this baked potato recipe. Once you’ve assembled your ingredients, follow these easy steps:

First, preheat the oven to 425, and line a baking sheet with parchment paper.

While the oven preheats, prep the potatoes. Scrub the potatoes well and pat them dry with a kitchen towel. Then, poke the potatoes with a fork a few times to create small holes across their surfaces.

Next, season the potatoes. Place them on the baking sheet and rub them all over with olive oil. Sprinkle them liberally with sea or kosher salt, and transfer them to the hot oven to bake. 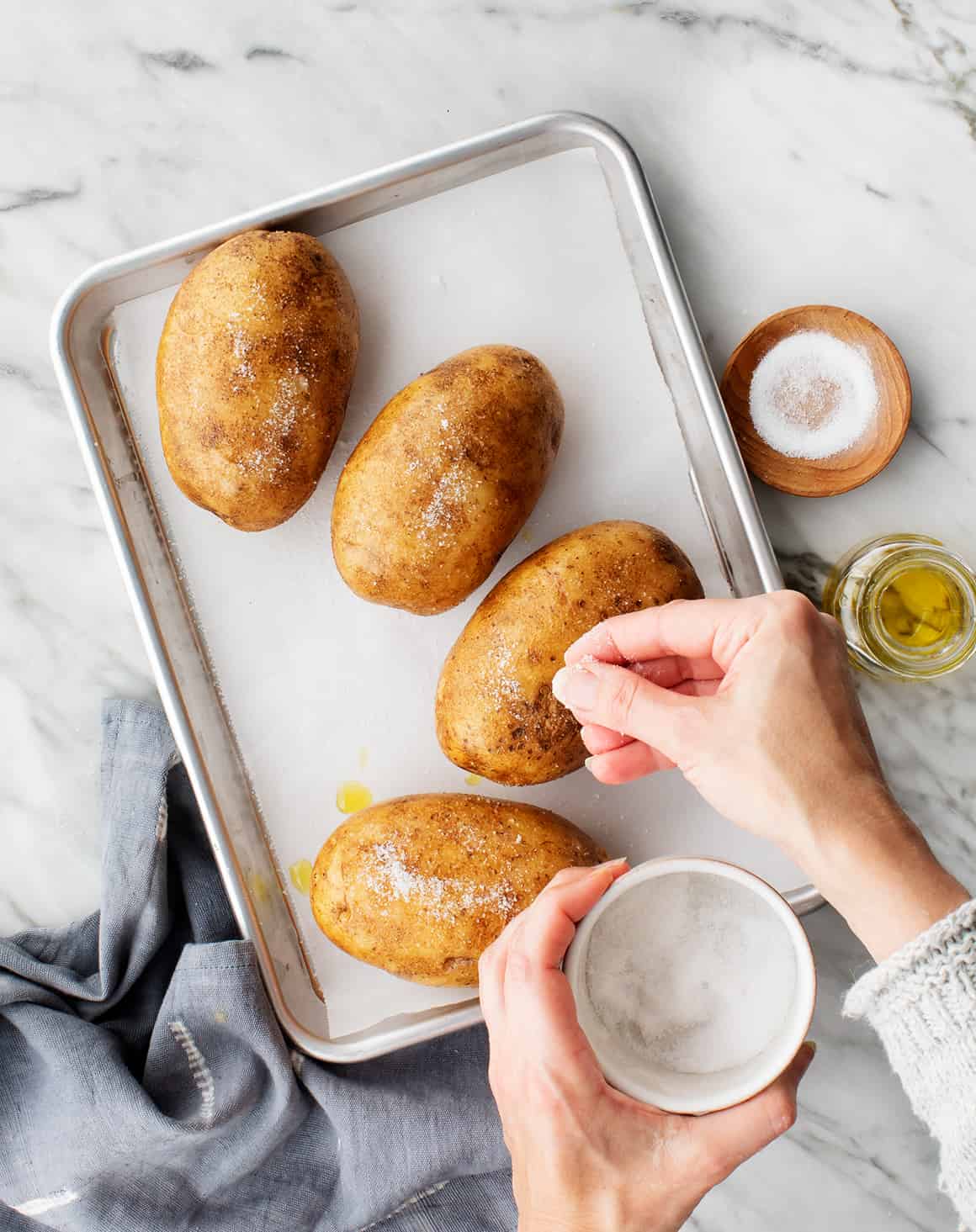 Bake for 45 to 60 minutes, until the skins are crisp and puffy and you can easily pierce the potatoes with a fork. Use oven mitts to remove the hot baking sheet from the oven.

Finally, dig in! Allow the potatoes cool for a few minutes before slicing them open, fluffing up their insides, and topping them with your favorite fixings. I like cashew sour cream, tempeh bacon, chives, and salt and pepper! 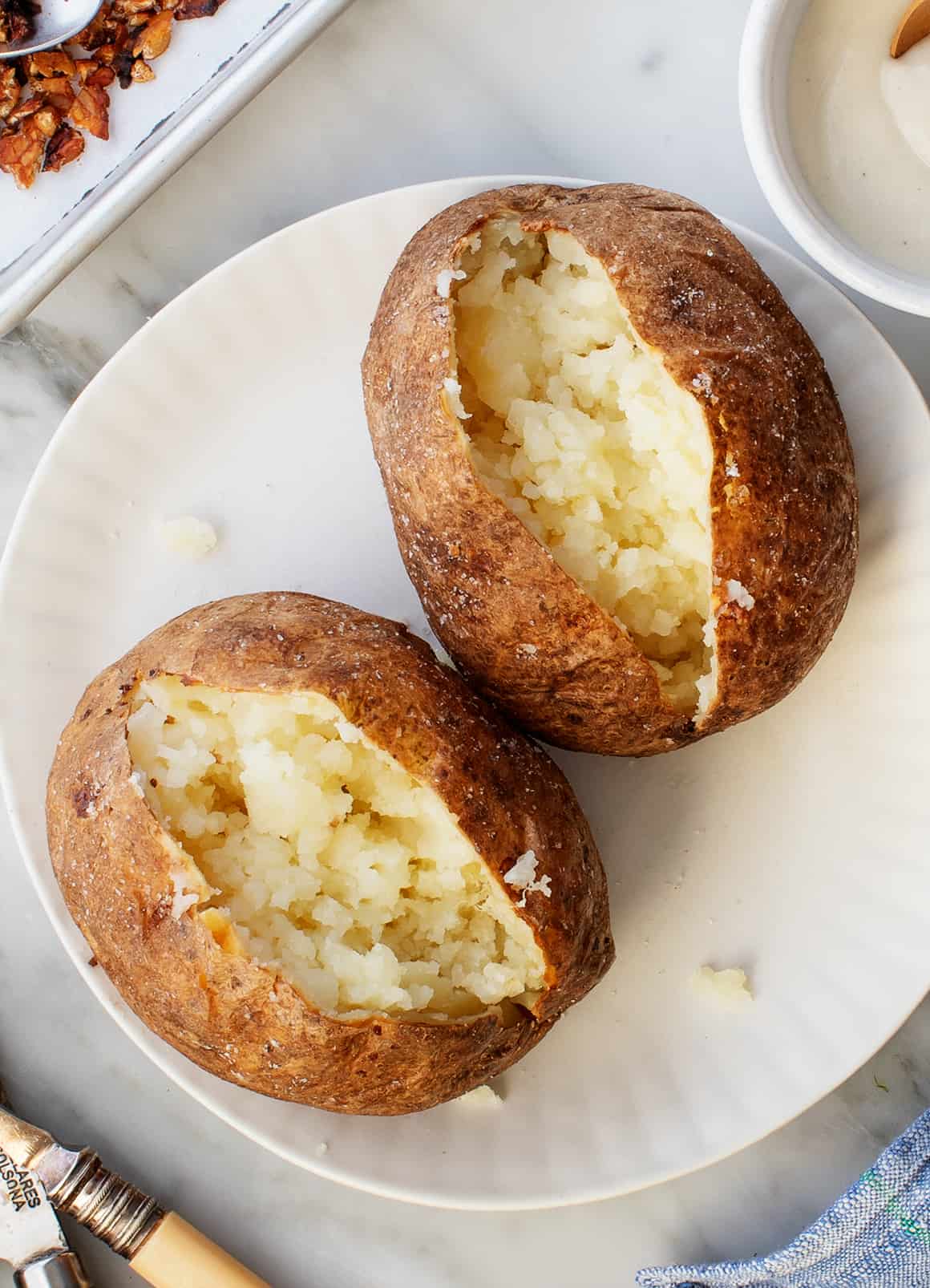 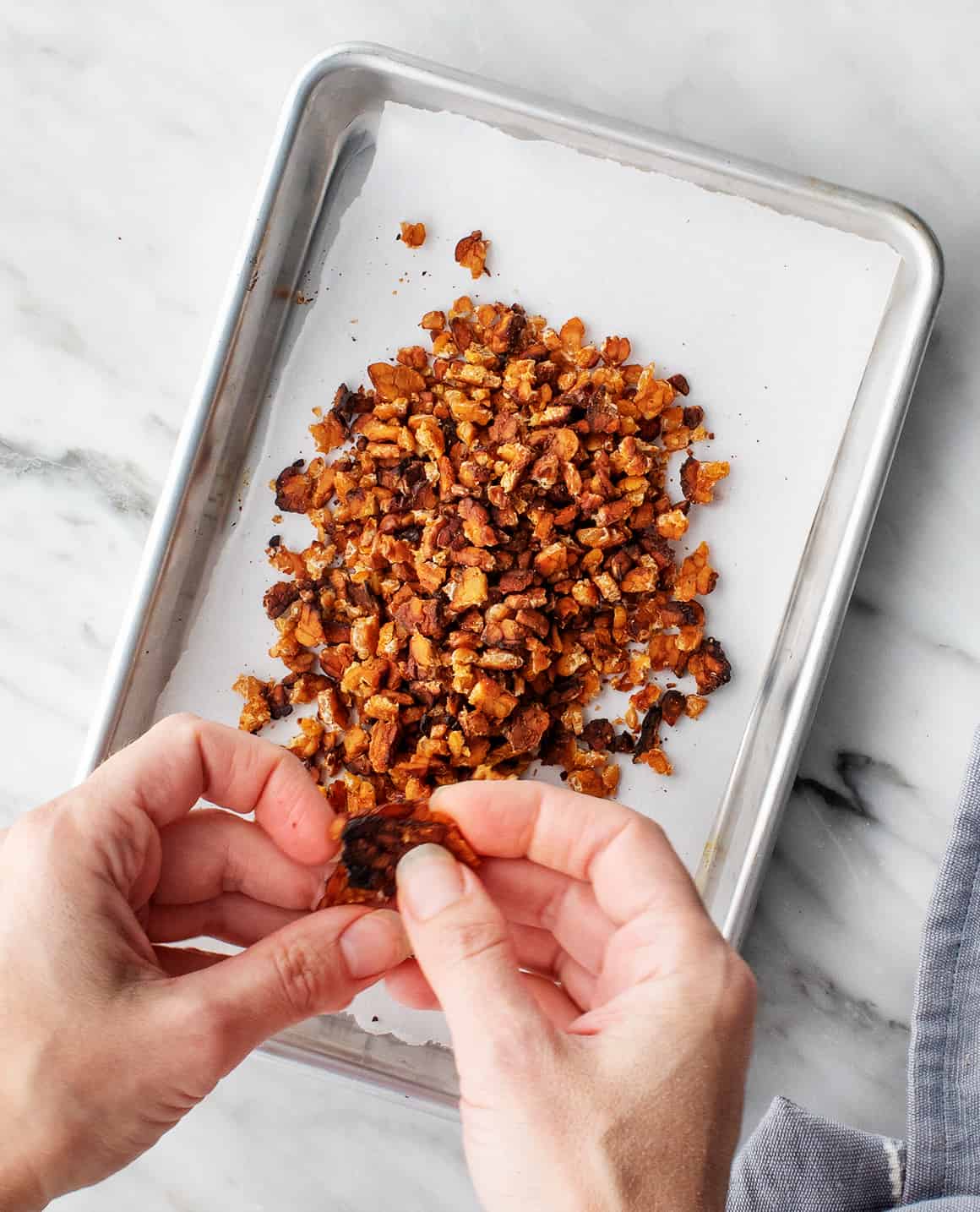 You can’t go wrong by serving this oven baked potato recipe with a pat of butter, salt, and pepper, but a few well-chosen toppings can really take it to the next level. I love mine with cashew sour cream, tempeh bacon, and chives, but regular sour cream, “cheese sauce,” Greek yogurt, or cheddar cheese would also be delicious.

Enjoy this baked potato recipe as a meal on its own, or pair it with your favorite protein. It would also be yummy with a hearty salad like my Caesar salad, broccoli salad, or kale salad, or with roasted broccoli, cauliflower, or Brussels sprouts. 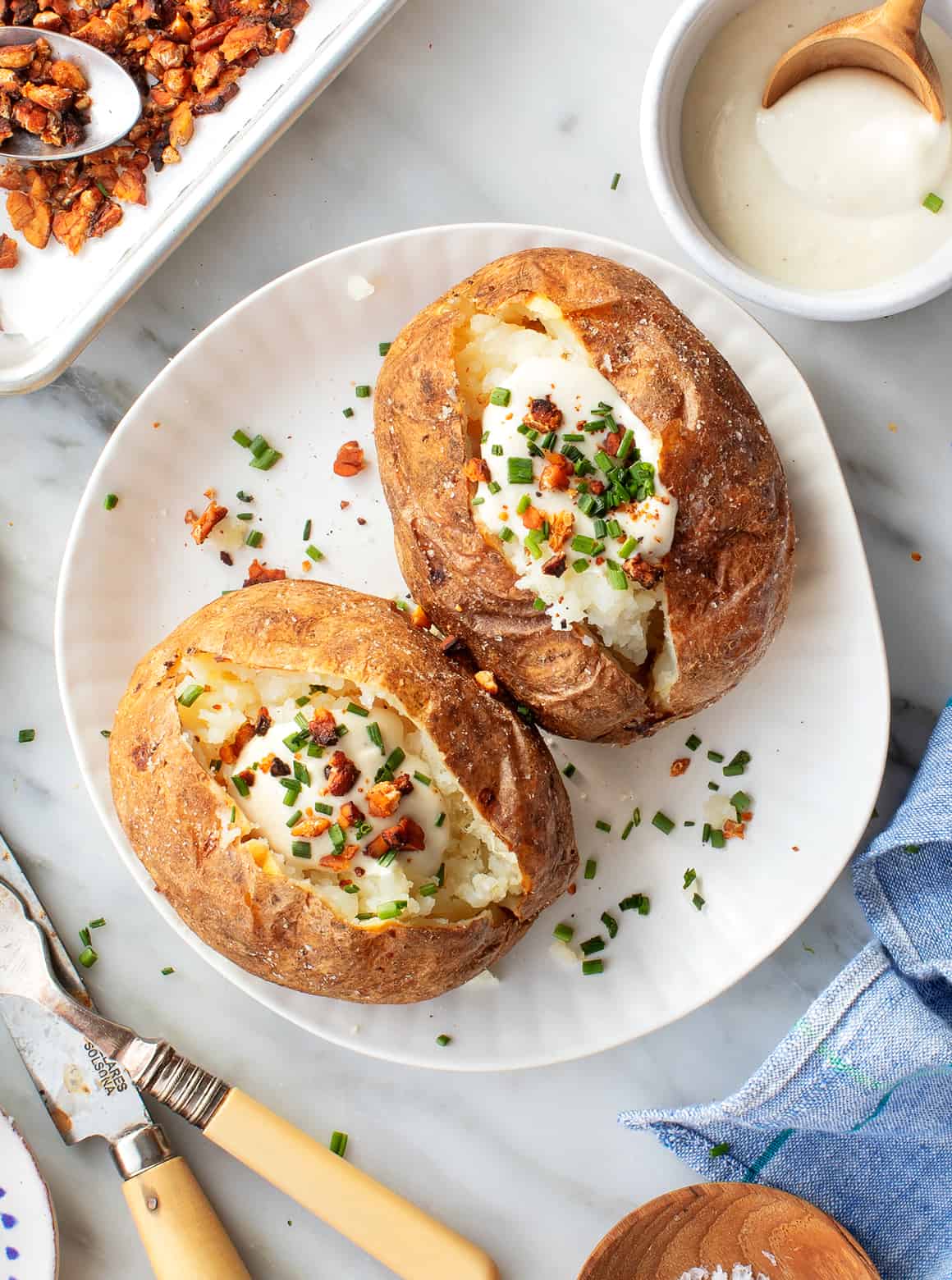 If you loved learning how to bake a potato, try one of these favorite potato recipes next!

rate this recipe:
5 from 14 votes
Cook Time: 1 hr
Serves 4
Pin Recipe Print Recipe
Bake a potato perfectly every time! With the olive oil & sea salt coating, it'll come out of the oven with crispy skin and fluffy insides that are delicious with your favorite toppings.