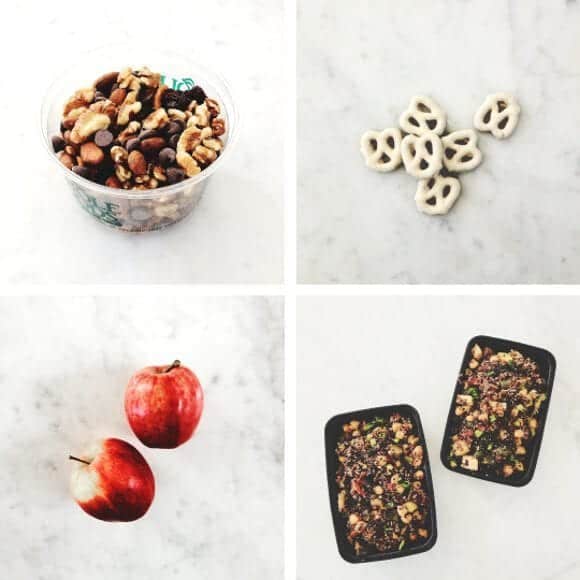 I have to admit, I always used to enviously read Heidi’s posts about the food she would make and bring on long airplane trips and think, “really, how the heck does anyone have that kind of time before a big trip? She must really have it together…”

My mom is going to read this post in disbelief because I promise you this kind of prepared-ness is so not me. Running for flights and just barely making them… is me. But in recent years, I’ve gotten a little bit better just because it’s no fun traveling for 20 or so hours and being stuck eating crappy airplane/airport food. We’ll probably be eating Ben & Jerry’s during our layover on the way home (no judgement), but I like to at least start a trip on a healthier note.

This time there was the usual: apples because those long flights are so dehydrating, trail mix from the Whole Foods trail mix bar, and yogurt pretzels (ok not so healthy, but they’re Jack’s favorite). I also managed to pack up some leftover chickpea & quinoa salad that we ate for dinner the night before. It’s not so much a recipe, but a “everything I had to use up before we left” kind of meal… with aubergines, courgettes (we’re speaking british now), and some chopped poblanos…

I wasn’t organized enough to write this down (I was busy trying to finish up packing) but this ended up really tasty. Improvise as you wish and taste as you go:

2 eggplants (aubergines), chopped into 1/2 inch pieces, salt them a little
2 zucchinis (courgettes), chopped
a cup or so of cooked and drained chickpeas
spices: paprika, cumin, minced garlic, some minced onion
1 can of chopped tomatoes with the juice (not drained)
pinch of sugar
1 cup or so of chopped scallions
1 pre-roasted poblano, chopped (or a green pepper)
chopped kale or spinach (1/2 bunch, or a few big handfuls)
1 cup cooked quinoa
handful of chopped basil leaves
salt & pepper

Heat oil in a large skillet, add eggplant, zucchini, and chickpeas, salt & pepper, and cook until you get a nice sear, especially on the eggplants. I think 5-7 minutes or so (maybe a bit longer, but not so long that they get soggy.

Mix the spices together and add to the pan. Toss everything around, cooking until they’re aromatic (not too long so they don’t burn), then add tomatoes and a pinch of sugar. Add some more salt and pepper. Reduce heat. Toss in the kale and let everything simmer, uncovered for about 10-15 minutes (again, I’m going from memory here so cook it until you think it’s done).Taste and adjust seasonings. (I think I added some lemon zest and a squeeze of lemon, like I’m known to do).

Remove from heat, stir in quinoa, scallions & basil. This served 2 of us that night and 2 of us the next day on the airplane. (I ate this with some chopped avocado for dinner, but avocado would not last well as a leftover/airplane meal).